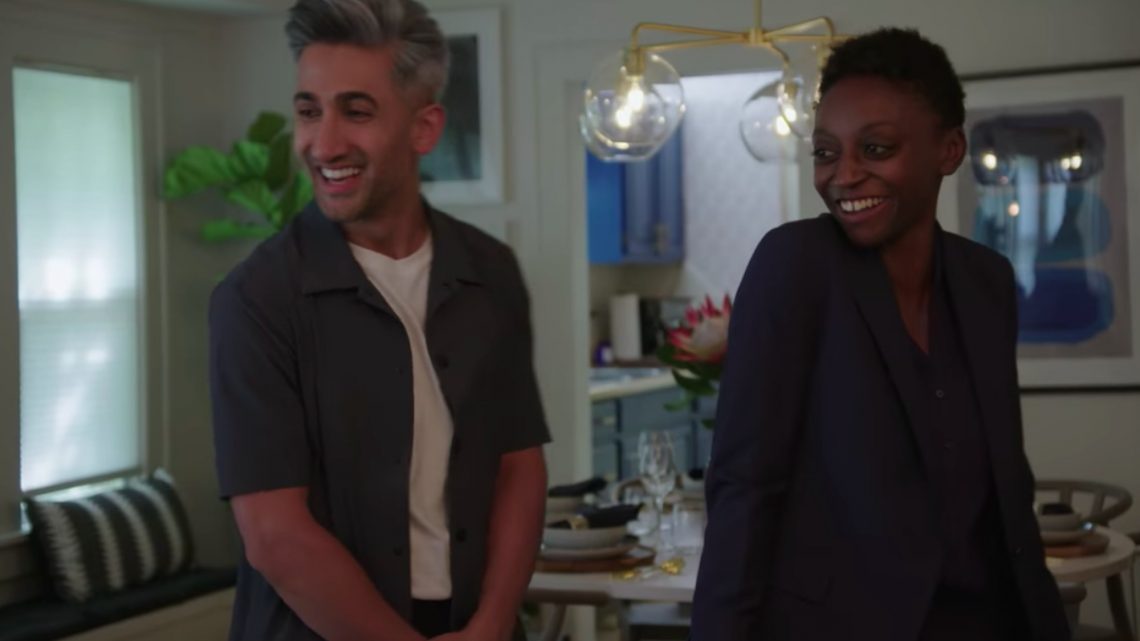 Though she was kicked out of her adopted home as a teen after coming out to her parents, the Fab Five helped her regain her confidence and reconnect with her biological sister. Formerly a self-described "lumberjack lesbian," Jess told the hosts that she was confused about how to present. But the Queer Eye crew helped her figure out her personal style in a tear-jerker of an episode. Jess’s story was inspiring to many, including one of her own heroes, fellow Kansas queen Janelle Monáe, who tweeted about the episode and gushed about it to Lizzo in an interview with Them that dropped Friday.

Guilbeaux is in the news this week because a GoFundMe page a friend set up to send her back to school raised $100,000. It’s clear that something about her story has resonated with Queer Eye viewers. On her Instagram, where she has more than 65,000 followers, she posts charming photos celebrating her afro and videos of her new hobby, performing drag. The phrase “strong Black lesbian woman” has become her mantra, and based on the comments on her posts, followers of all backgrounds are inspired. Jess’s Queer Eye experience was transformative—but I wanted to know what happened when the cameras left the room, along with what Jess is doing with her growing platform. I caught up with her to find out.

VICE: One of the things that really struck me as a queer Black woman who has also had to find my own style is when you mentioned that growing up, you felt pulled between dressing “more gay” or “less gay.” Where were those pressures coming from, for you?
Jess Guilbeaux: I think one of the most helpful things is taking time to listen to yourself and really decide, "OK, what do I like, and why do I like it? Do I like it because I saw it on someone else? Or do I like it because genuinely I’m interested in it and feel comfortable doing this?" It’s all about listening to your heart and just being genuine with your actions and honest with yourself. Because then you’re like, "OK, this isn’t necessarily seen everywhere, but I still like it. I feel more comfortable wearing these kind of clothes versus these. I feel comfortable with my hair looking like this instead of like this. Even though I don’t know much about it, let me go educate myself." It’s really just surrounding yourself and putting yourself in an environment where you can do those things, whether that’s the people you hang around or the music you listen to. It’s all about just being yourself, because it’s important.

Now that you’re gaining a following, how do you think about the way that you influence people in their style?
I have noticed a little bit that I am somewhat of an influencer now, which is great that people feel inspired by me. But what I want to give back into the world and show people is that the way that I present myself is just by being me. If they take something from [my style], that’s cool. But the message in my Instagram pictures is, "I feel cool in this," and I hope that’s what people see. It’s not because I’m trying to be someone else or push something. I want people to be like, "Alright, she’s doing her thing, so I’m going to do my thing." And maybe that looks similar, but it’s more so that you see me being myself so that means it’s OK for you to be yourself. That’s where I want to go with my platforms.

So where did you find a place to do drag in Kansas and how did that affect your journey?
The Kansas drag scene is very underrated! No one knows about it. When I think about drag I think of New York, California, or big cities, but Kansas has a drag scene that’s live and thriving. Lawrence, Kansas, where I am, there’s only one place but it’s still poppin'. The drag show was literally last night. Actually the place that I go here, [Jazzhaus], that is the place that I’ve felt the most comfortable to be queer. It’s in those spaces, at drag shows and at queer spaces, that I can just be myself and let go. If I hadn’t found those drag shows I wouldn’t be where I’m at, expressing myself the way that I do, just being out and gay and public. It’s important for people to know drag isn’t just people dressing up and getting drunk, it’s literally an art form that allows people to feel free. It’s important to understand what drag can bring into people’s lives. Even just being around it or exposed to it allows you to live in this fantasy where you can do whatever you want. It’s so positive and lighthearted and expressive, which is hard to find. So that’s why I decided to do it.

Were you one of the only cis women doing drag there or are there other women doing it too?
I’m the only cis female queen currently that performs there. There’s mainly men, and also drag kings, which is beautiful, and also trans drag performers and things like that. It’s not as diverse as some of the bigger cities, but we’re getting there.

Some fans were surprised that you had other queer friends and a pride flag hanging outside of your house. Is there a queer scene or would you say that you and your friends are creating the scene?
There is a queer community in Lawrence, but it’s growing. The more close-knit and family-esque it’s becoming just makes it that much more enticing. It’s growing and has the potential to be even bigger. People need to see that just because politically Kansas as a whole may be more conservative, that doesn’t mean there’s not a warm and welcome place for queer people here.

I don’t know of many queer women influencers living in conservative places or thriving in a Bible Belt. What does it mean to you to influence people from Kansas as a queer Black woman?
It means a lot to me. Because it’s a narrative that needs to happen, that we exist, we’re strong and amazing and beautiful. It’s possible. It doesn’t matter what environment you’re in—you can still do things, you can still be something more than what you’re given. That’s also the message I want to send to people, that you may be dealt really terrible cards but you gotta keep going and keep being yourself and you can do anything, even in a place like this.

Janelle Monáe’s Dirty Computer is partly a commentary on gay conversion therapy, which I know is a prevalent issue in Kansas, where you’re both from. What are some other topics you think we would be hearing more about if there were more queer women gaining big platforms in conservative places?
Well, [conversion therapy] definitely. Also just in general the fear that’s kind of accepted. As a queer person in conservative spaces, you kind of accept this level of discrimination as a normal thing. If you start a new job, you have to toss the idea around in your head: "Do I come out? Do I tell everyone who I am, or do I hide it?" Because your first day could be your last day at that job. You could lose your livelihood just by being who you are. And that’s what people go into every situation knowing. It’s not just jobs, it’s everywhere. It’s businesses that won’t even let you in the door. You could get married and not even have a wedding cake. It’s just crazy, and it’s something that’s naturally accepted.

Queer people in conservative spaces are really strong for what they put up with and they’re constantly fighting a battle every single day just to exist. If you come and talk to some of the queer people they’re like, "Yeah people stare at me when I’m walking down the street and I have a pride pin on my book bag." It’s tough, and it’s hard to hear. But we’re also in this place where we, as a country, have grown. The country as a whole has gotten a little bit better in terms of recognizing that there are differences in people, but that’s it. It’s out there and people have just been like, "Discrimination doesn’t exist anymore because we recognize it." But that’s not true, and I hope that people like me and Janelle Monáe and other queer influencers who come from conservative states can shed light on that. This is not where we stop, just by acknowledging it. We need to keep going and keep changing.

Did your experiences navigating queerness or discrimination in your community change once you developed this new confidence?
Yeah. After the show, I carry myself so confidently, so instead of being afraid that someone’s going to approach me about being queer, I encourage it, because I want to have that conversation. I want to ask them what they mean when they say my queerness is making them uncomfortable. I want to talk to them, I want that conversation to be there. Every situation, whether it’s positive or negative, that comes from me being out and open and queer is a learning experience, so I welcome it. That has changed with my self confidence, and also the way I carry myself in public has changed as well, in a positive way for sure.

Ending on the important stuff: What do you want to be the next song you do drag to?
The next thing I want to perform to is Paramore. I want to perform to things people don’t expect. You go into a drag show and you think Nicky Minaj is going to come on or Lizzo—you know it’s going to be poppy, upbeat. That’s cool, but also let’s question why people don’t perform to rock. Because the lyrics are just as impactful, the vibe is just as electric—it’s just expressed differently and it’s not seen. But why not? That’s just me. I’d do Paramore because they’re amazing and I want to test people’s view of drag.

Einhorn Says Tesla Once Again “On Brink of Failure”