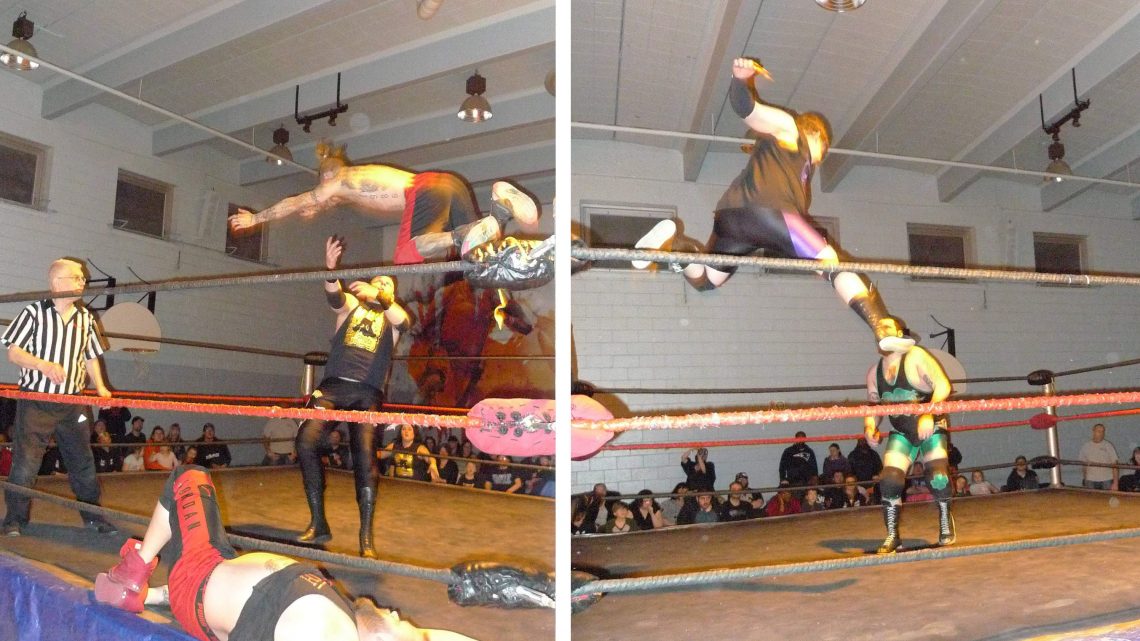 Inside a Brutal Night of Amateur Wrestling

This was all on proud display as 100 or so fans packed into a crowded gym in Pointe-St-Charles, a tough but slowly gentrifying neighborhood in Montreal’s southwest, to watch the amateur wrestlers of the Wrestling Titan Atlas (WTA) and Inter-Championship Wrestling (ICW) leagues settle old grudges and create new ones. 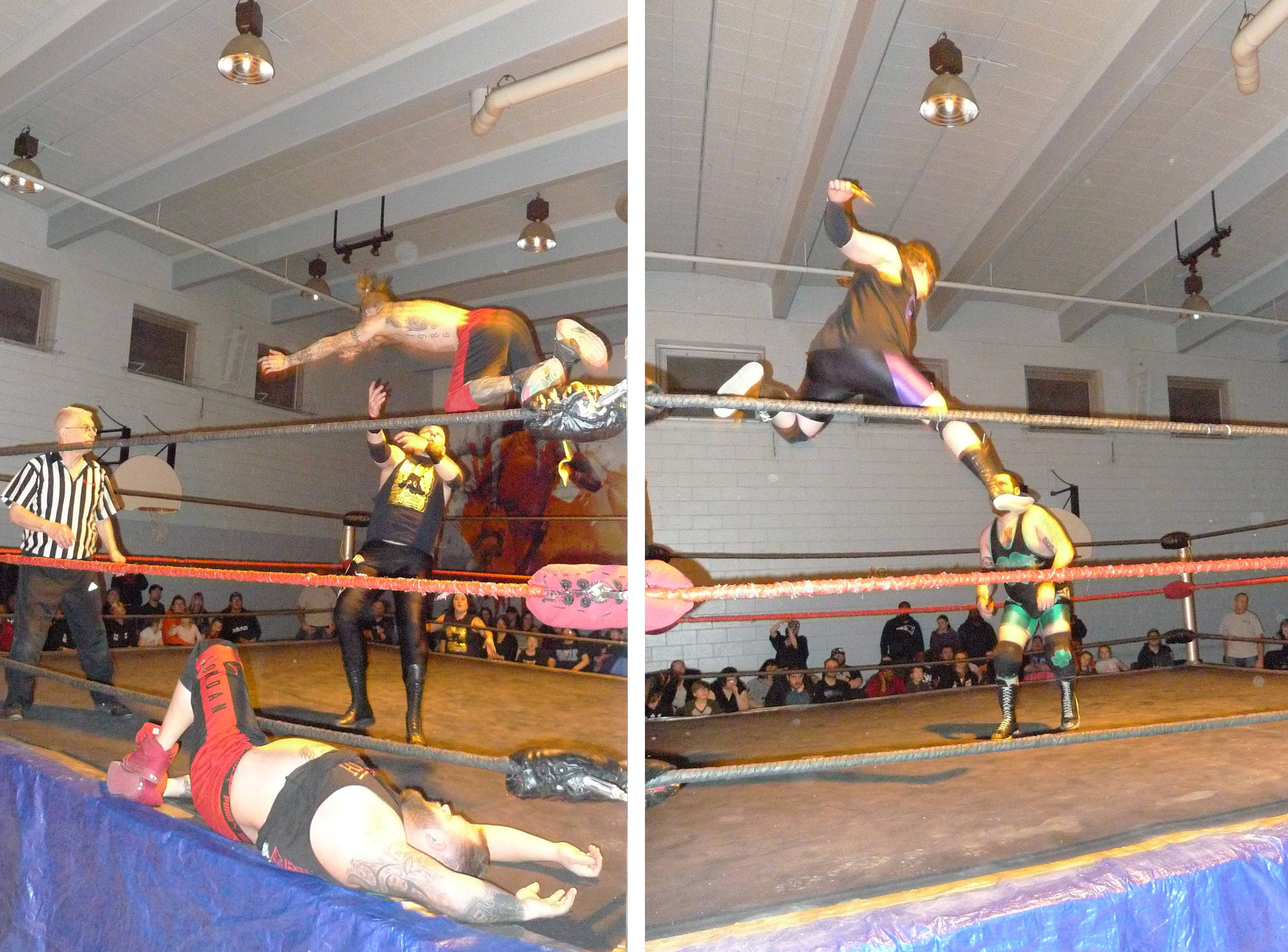 The event was hosted by the WTA, which was founded in 1994 by Michel Toucher, a wrestler who wanted to give the children of the Sud Ouest who couldn’t afford hockey equipment or professional wrestling tickets the chance to stay out of trouble and learn how to wrestle. The first ever WTA match was held in the basement of St-Charles Church in the Point, after Toucher struck a deal with a local priest, and fights are now housed in the much larger Centre Saint-Charles. 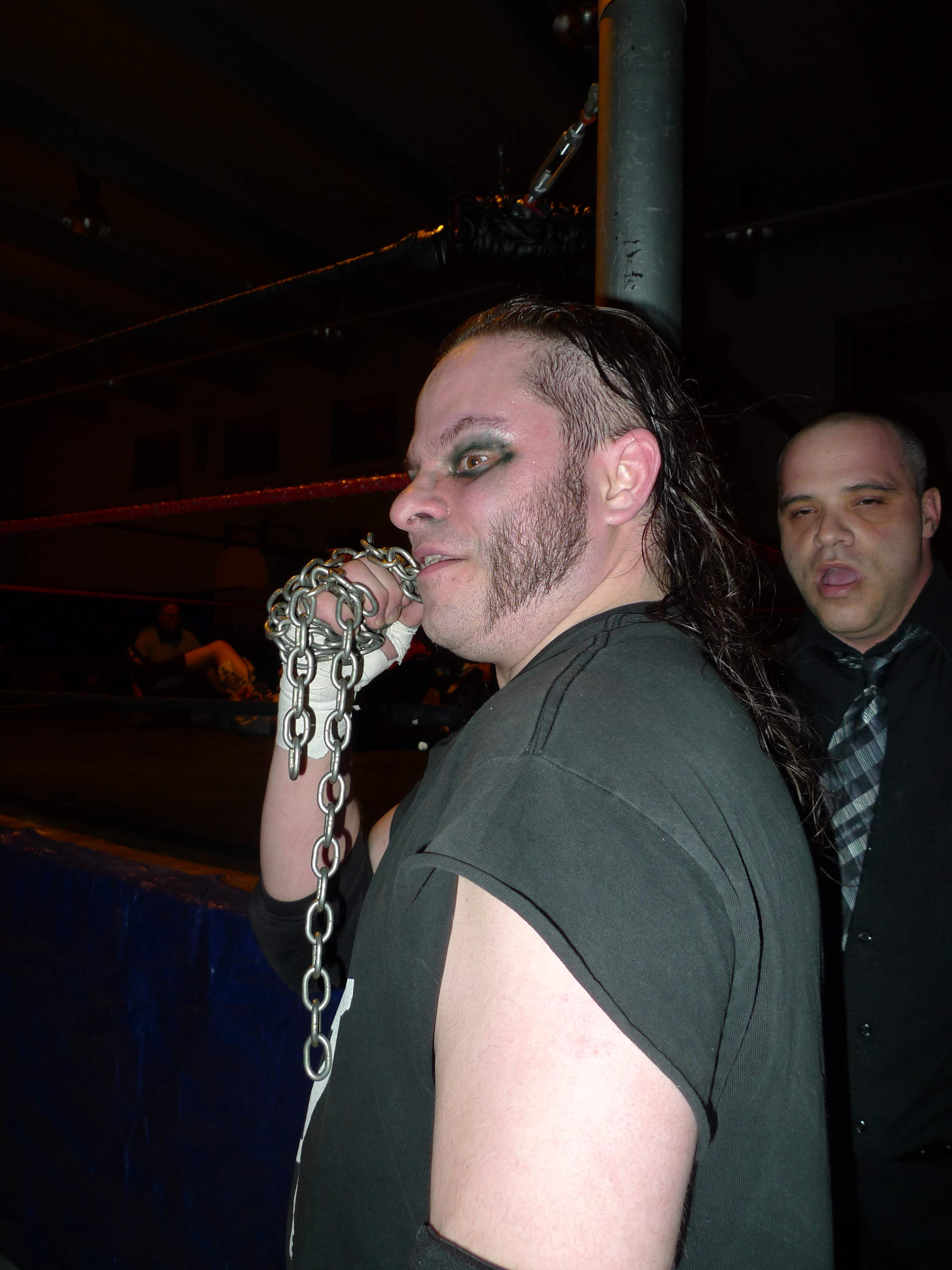 Beyond Pointe-Saint-Charles, amateur wrestling remains a vibrant community within Quebec, with more than ten leagues that split up the island of Montreal and other regions by territory. It’s a tradition that goes back to the 1930s in Quebec and once rivaled the Canadiens ticket sales at the Montreal Forum. By the 80s, wrestling had reached its cultural apex in Quebec, with legends like Dino Bravo and Mad Dog Vachon graduating to the WWF and André the Giant co-founding Lutte International to satisfy overwhelming local appetite for pile drivers and DDTs.

The WTA is firmly rooted in the 80s heyday of Quebec wrestling, both in terms of aesthetic and technique, though a new generation of wrestlers have begun to integrate the aerial theatrics and high-flying techniques that came to dominate the WWE of the 90s and beyond. Throughout the evening, wrestlers were locked into a tight feedback loop with their fans and their opponents, all of whom wanted the same thing: not the truth, but a good show, which, like any performance, is an illusion that conceals a deeper truth. The deeper truth here was the love that these wrestlers, organizers, and fans have for unbridled 80s-style choreographed violence.

We spoke to the Spandex gladiators of the WTA and ICW about the true art of fake fights and the future of wrestling in Quebec. 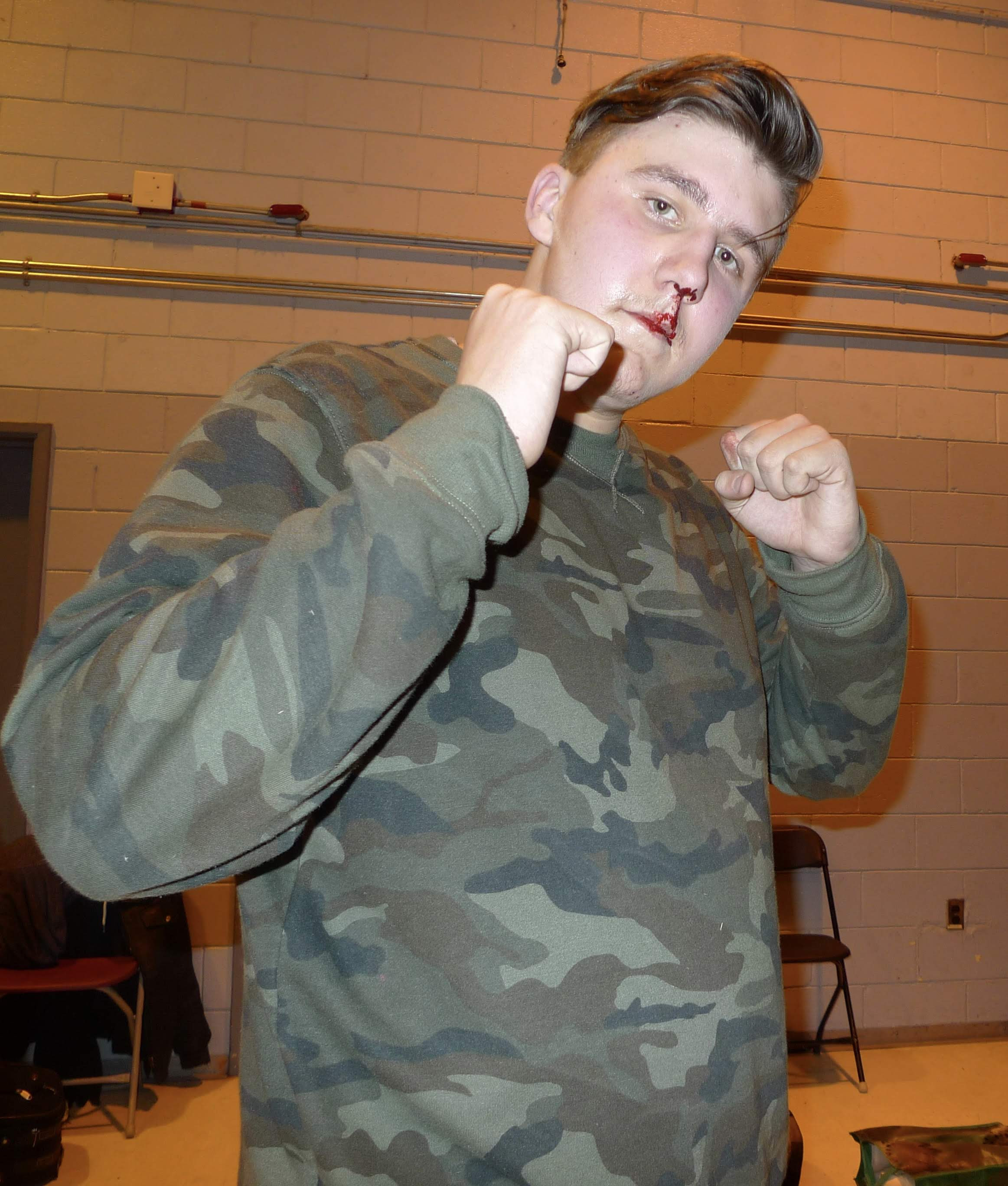 “My nose is bleeding because I got punched by someone who I really don’t like—for the show, of course, because in real life I really like him—That’s wrestling. Sometimes in life, you get hit for real and sometimes it’s fake. It’s like being tackled in soccer or body checked in hockey, it’s just part of the game.

I’ve been coming to WTA matches since I was a kid, my father used to wrestle for them and he’s retired now. WTA is a place where all of Point-Saint-Charles comes to see us wrestle and it’s really cool to see all the fans here.”

Right now, I don’t have a wrestling name, I’m just called ‘Xavier.’ I’m 17 and I attend a few wrestling schools to learn more and go as far as I can into the world of wrestling.” 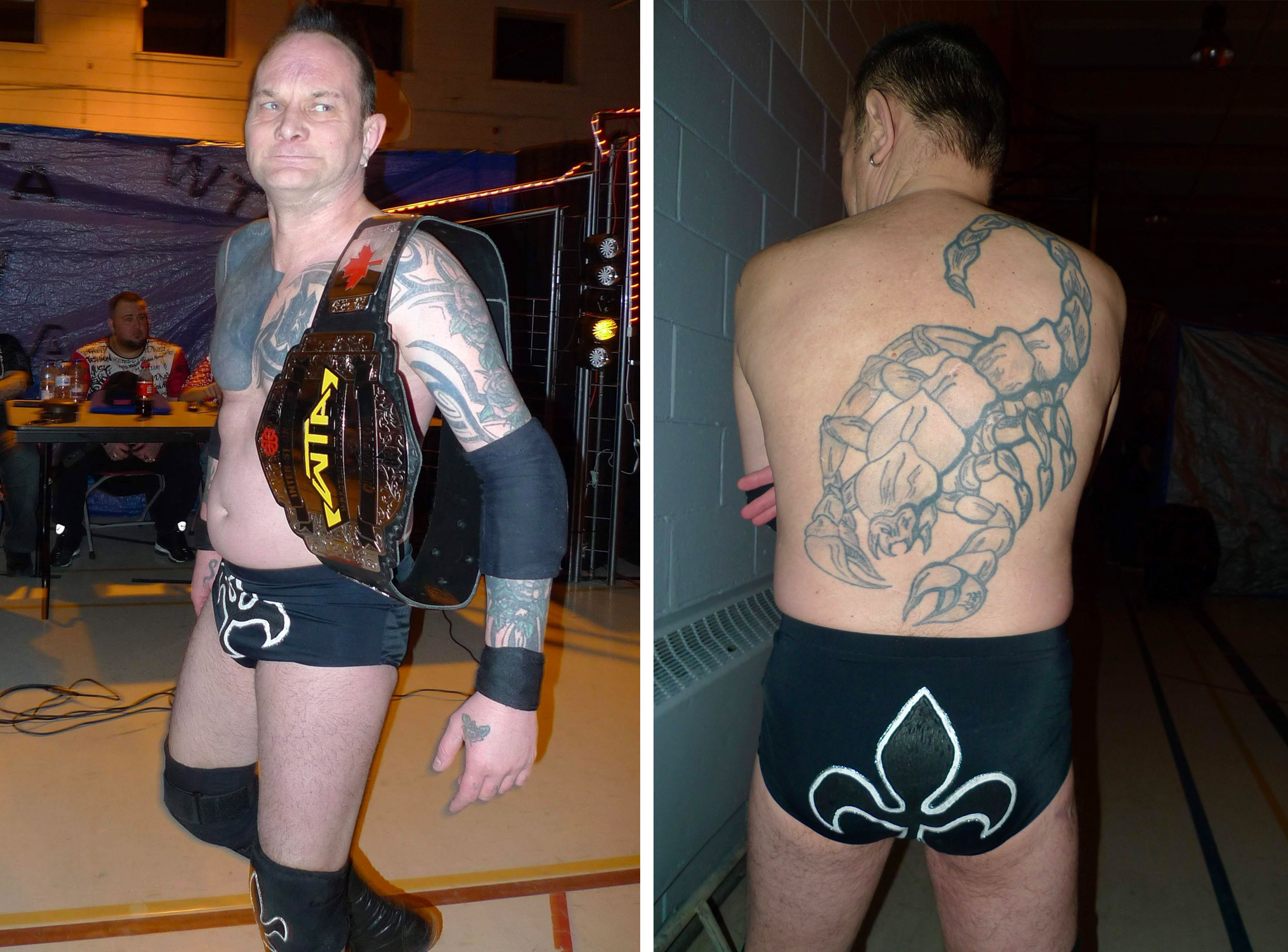 “I founded the WTA. Wrestling is undergoing a rebirth in Quebec and it’s getting bigger and bigger. When I started 18 years ago in the Point, it definitely wasn’t as popular, we were in the basement of Saint-Charles church on Centre street. Five years ago, I passed the torch to my students and now there is more high-flying and less old-school technique.

There weren’t as many smaller fighters 25 years ago, it was just big guys, I started the WTA specifically to have more small fighters and the next generation is promising. Wrestling is not dead in Quebec. If we all stand together, it’s a tradition that will continue for a long time.” 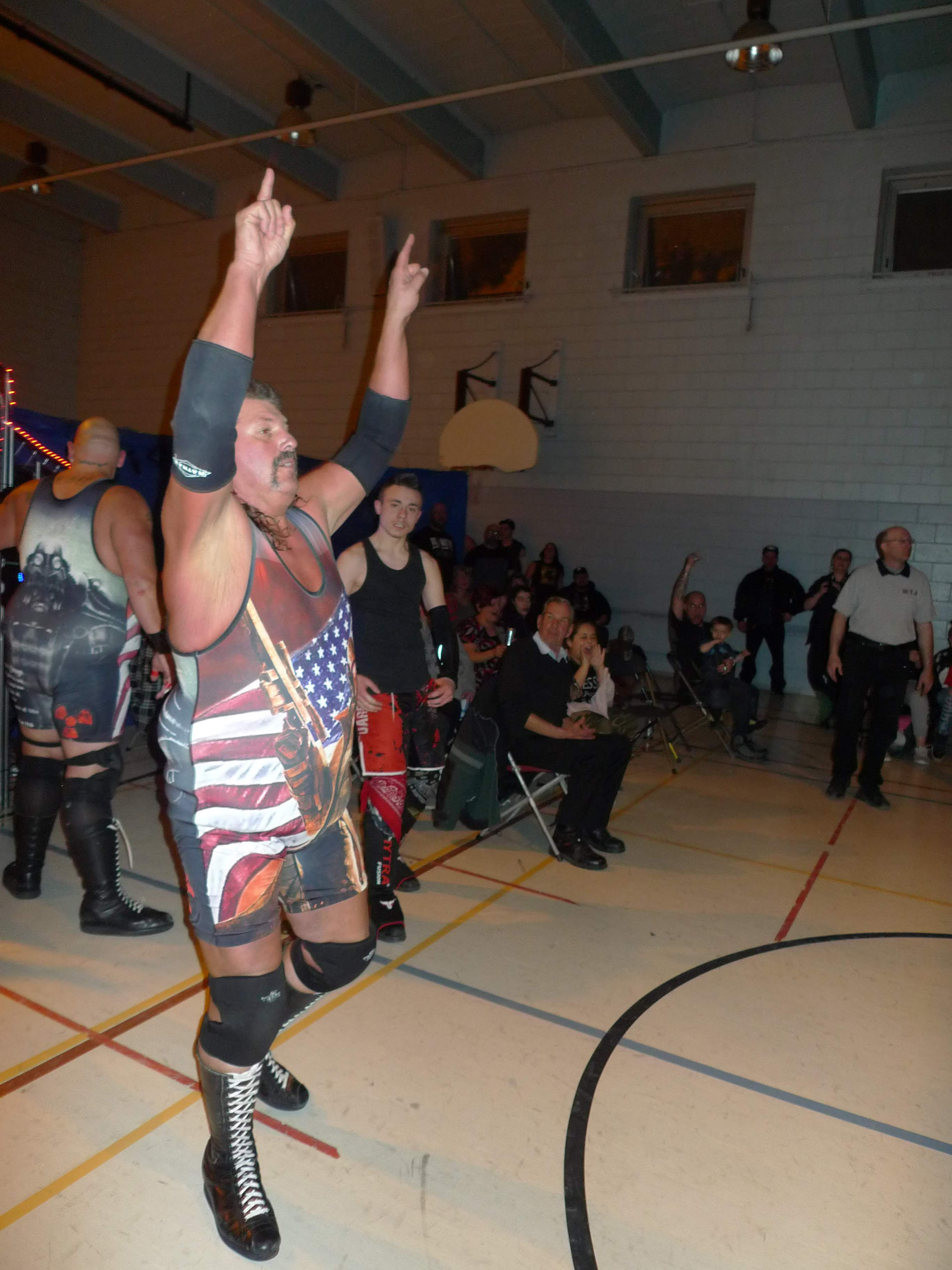 “I drive a forklift for a living, but wrestling is my passion. I can’t get enough of wrestling. The only problem is that I won’t be able to do it my whole life. I’ve already been doing it for 25 years. I started wrestling right here in Pointe-Saint-Charles. Nowadays, fans really respect what we’re doing and the shows are more interesting. People really get it and get into it. But you have to know what you’re doing: Sometimes you land the moves and sometimes you land on your ass.

It looks easy but you have to be well-prepared. Today, I’m in shape, I’ve been working out regularly for two years; half an hour or more per day. I used to weigh 425 pounds and today I weigh 232.

You also have to work the crowd. They’re very intelligent; they’re not stupid; they know what we’re doing and they like when the wrestlers take them seriously, it attracts bigger crowds. That’s what really matters. To be a good wrestler, you have to have charisma. Technique is important but so are things like facial expressions. The audience has to see and understand your character. I’m always nervous before I step into the ring because I want to make people happy. That’s what matters for me.” 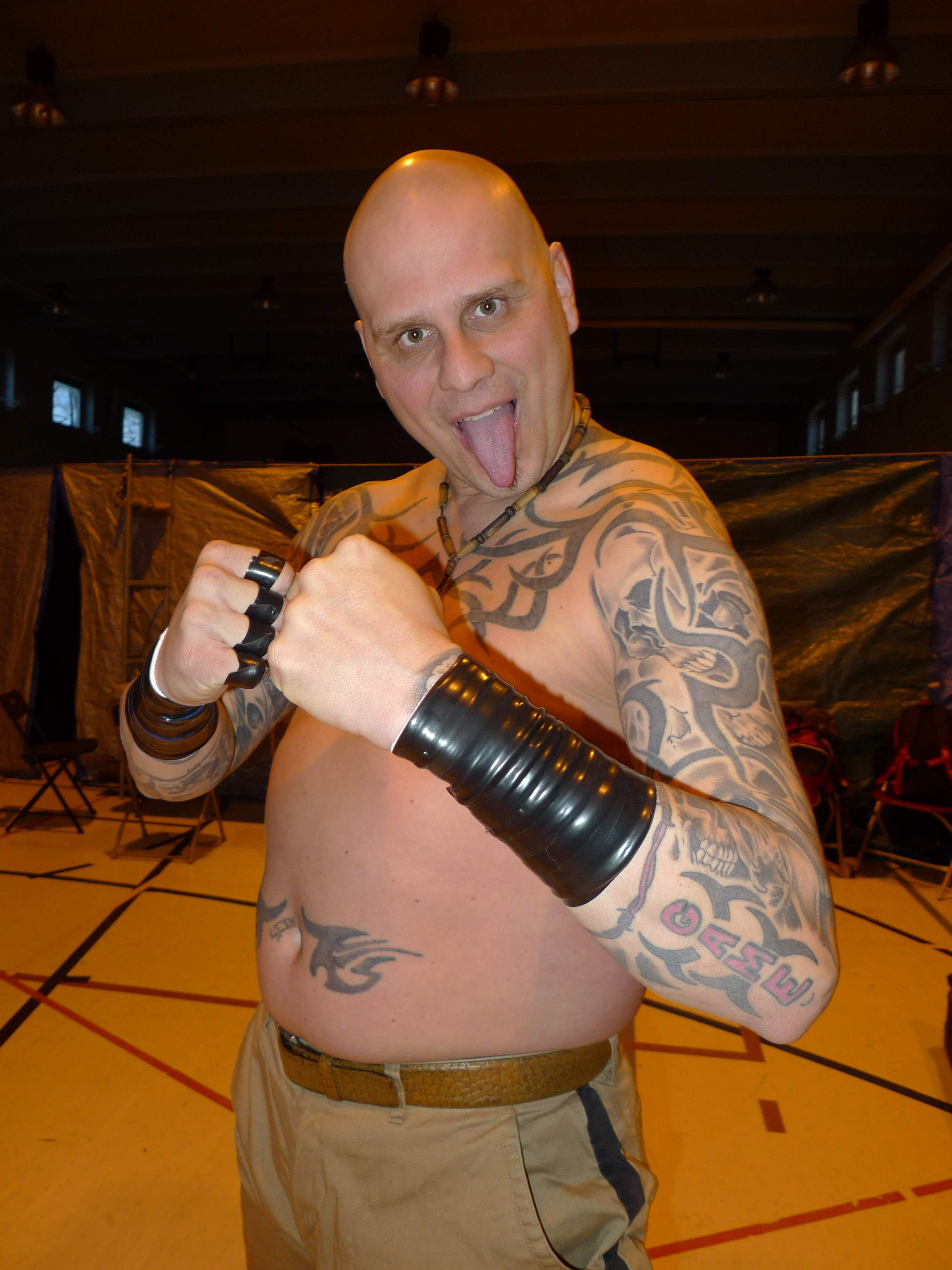 “I’m going to make short work of Bulldozer! I’m going to tear him into pieces! I’m the heel, so my job is to be mean and make the babyface look good.” 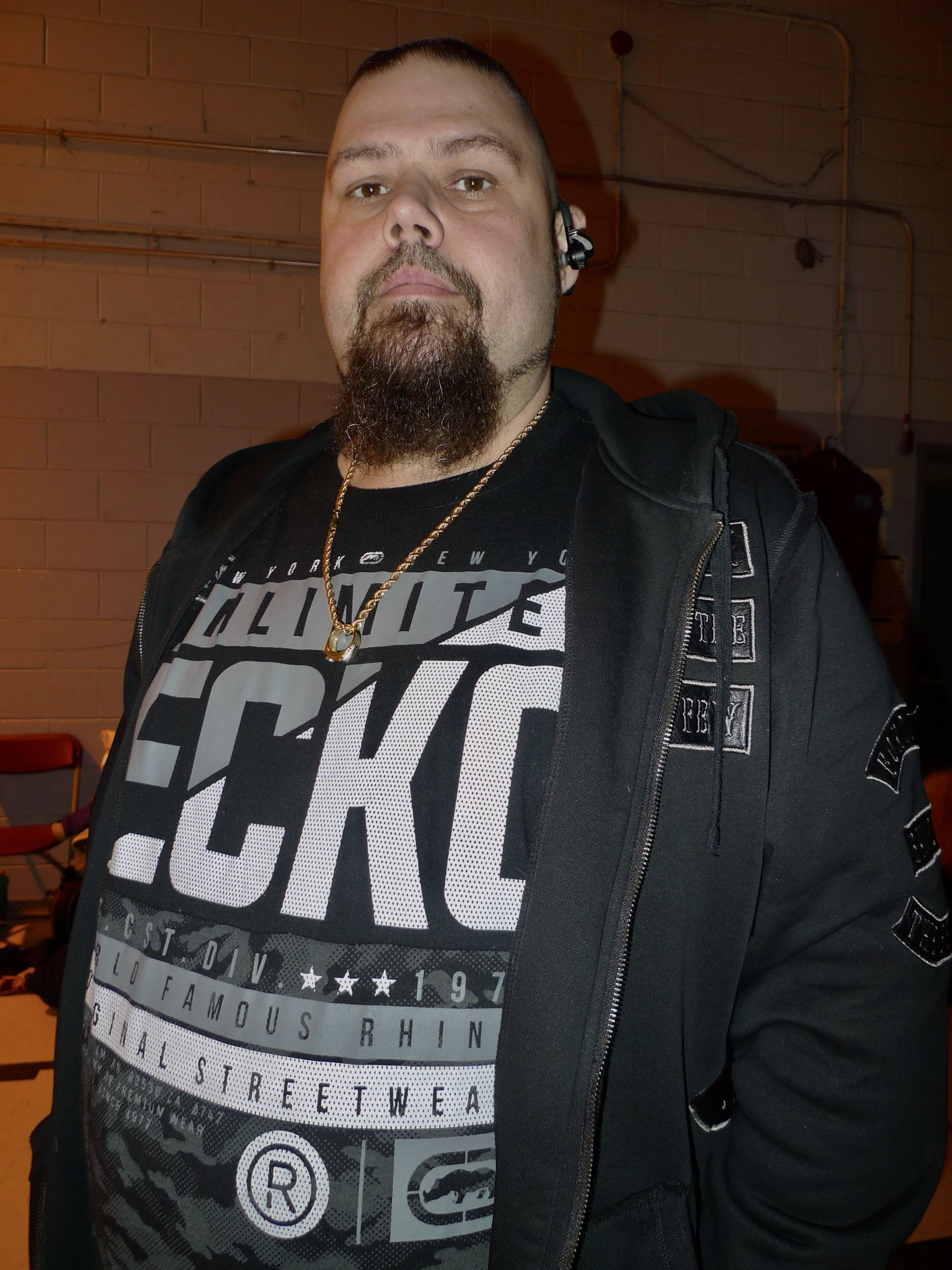 “I’m the booker. I choose the guys. I choose the gimmicks. I choose who wins and who loses. I’m a booker because I can’t wrestle anymore. I’m a forklift driver and a dock door fell on my shoulder a few years ago. Wrestling is my passion. I’ve been a fan since I was seven years old and it’s evolved a lot since then. There’s a lot of younger wrestlers now and as long as my friends need me, I’ll be here to help out.

In my day, skinny guys had no chance at wrestling, you had to be big and stocky. Nowadays, they’re starting at 12 years old and the smaller guys are becoming popular all over the place.

No one is paid here, it’s all volunteering. This league really depends on people working together. And even if you have the best wrestlers in the world, it won’t be a good match if the crowd doesn’t buy into it. The crowd decides everything. If we don’t feed them, they don’t feed us.” 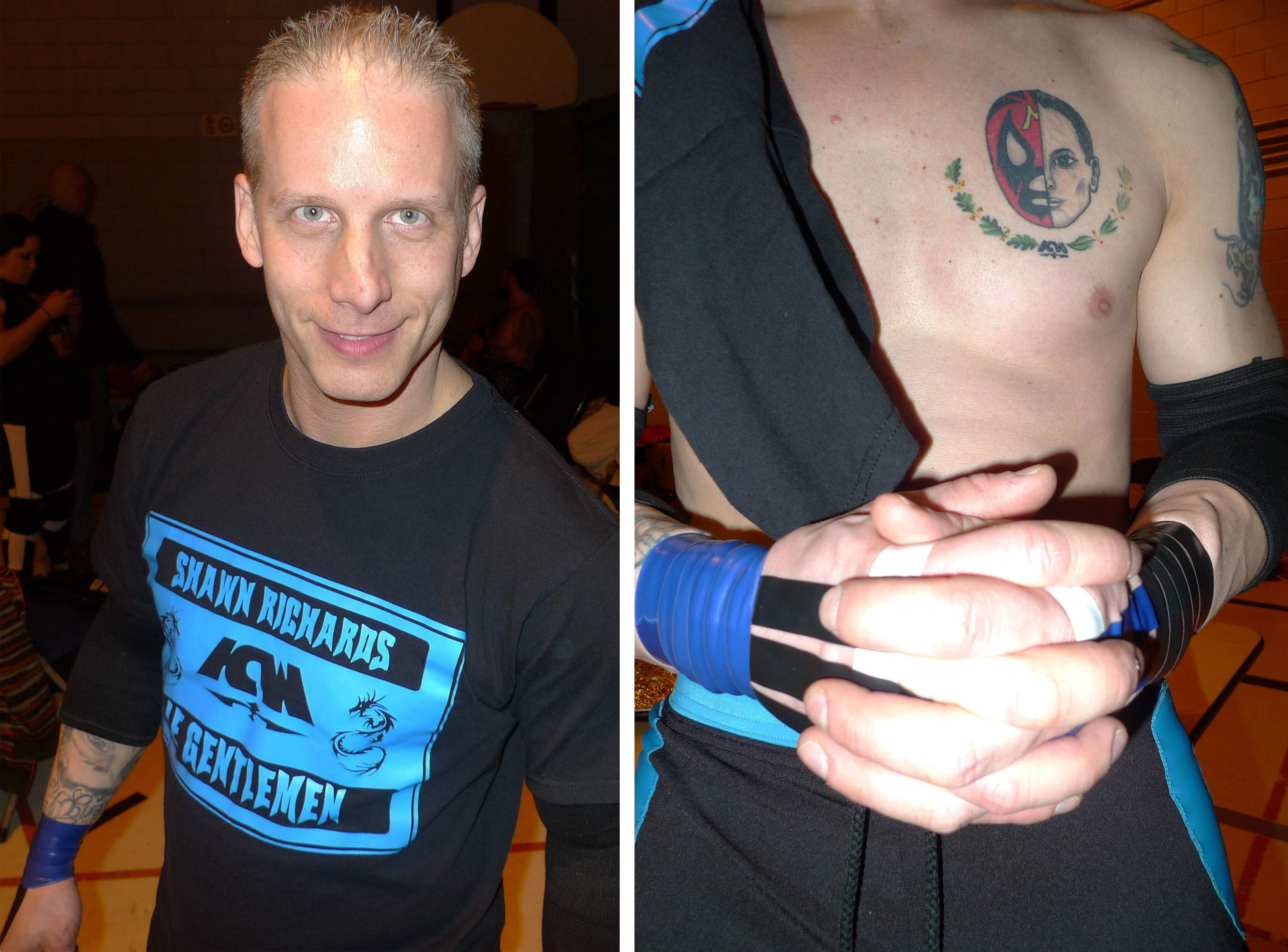 “My real name is Shawn Richards. For me it was important to keep my real name, which creates a more real rapport with fans I think. Plus, Shawn Richards is a good name! This is basically theater and I’m a big fan of the theater. Wrestling is a bit different, you only have 20 minutes to tell a story to a crowd. A fight is a story. There is always a good guy and a bad guy and you want the crowd to participate in that story.” 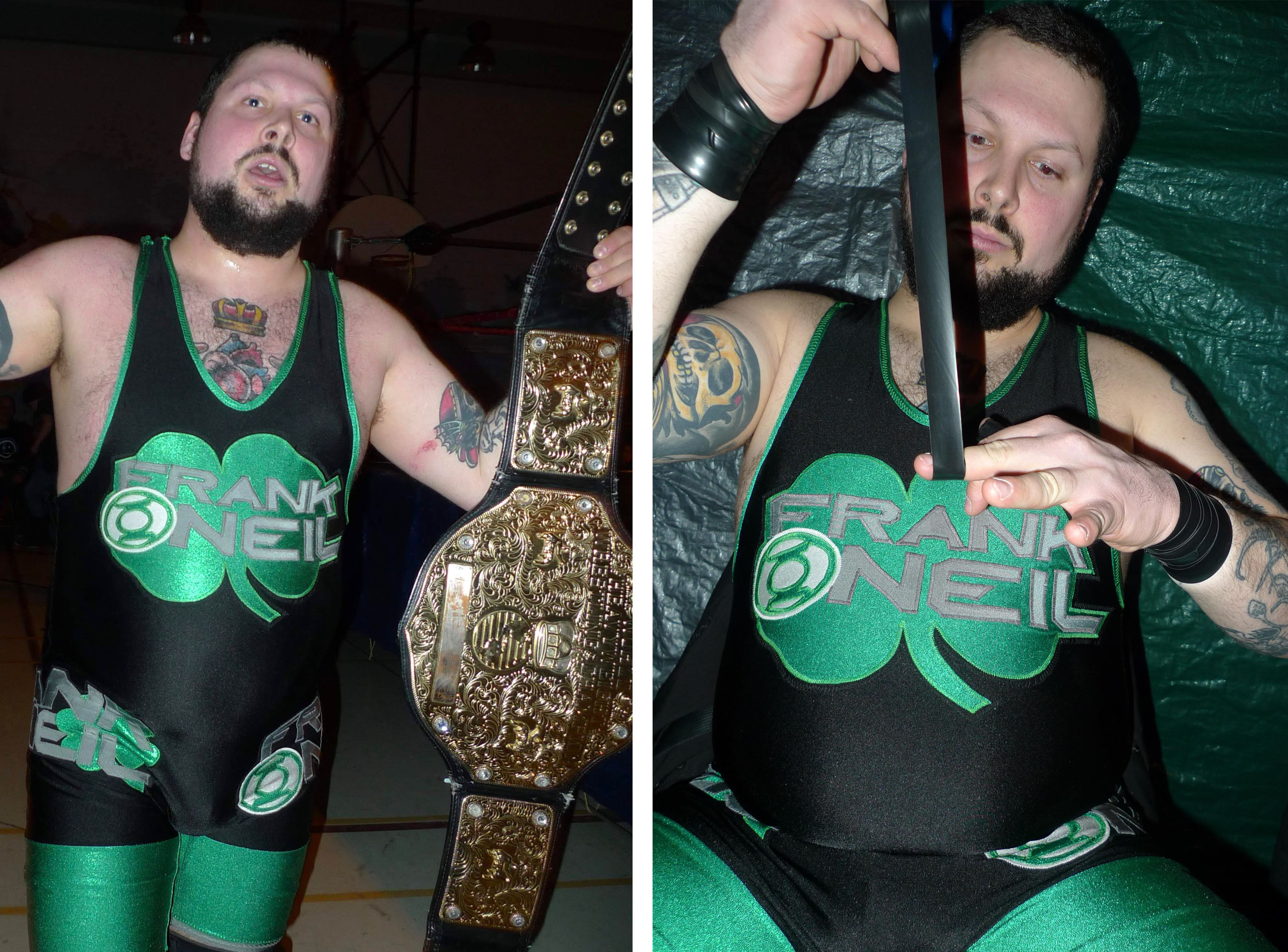 “When I’m Francis Lemieux, which is my real name, I’m a receptionist at a pharmacy. It’s a very normal job, but then I do this on weekends. I grew up watching wrestling with my parents. I was born in Ireland and I came to Quebec at the age of three. I’ve been wrestling since 2011. At first, I was just training, but then I caught the wrestling bug and haven’t stopped since.

“For me, this is extreme theater because you’re selling a story to the crowd. As you as you walk through those curtains, you get the most incredible rush of adrenaline. Before each fight, I go into a bubble until they play my song, The State of Massachusetts by Dropkick Murphys. They’re a sick band and the song works well with my costume.”