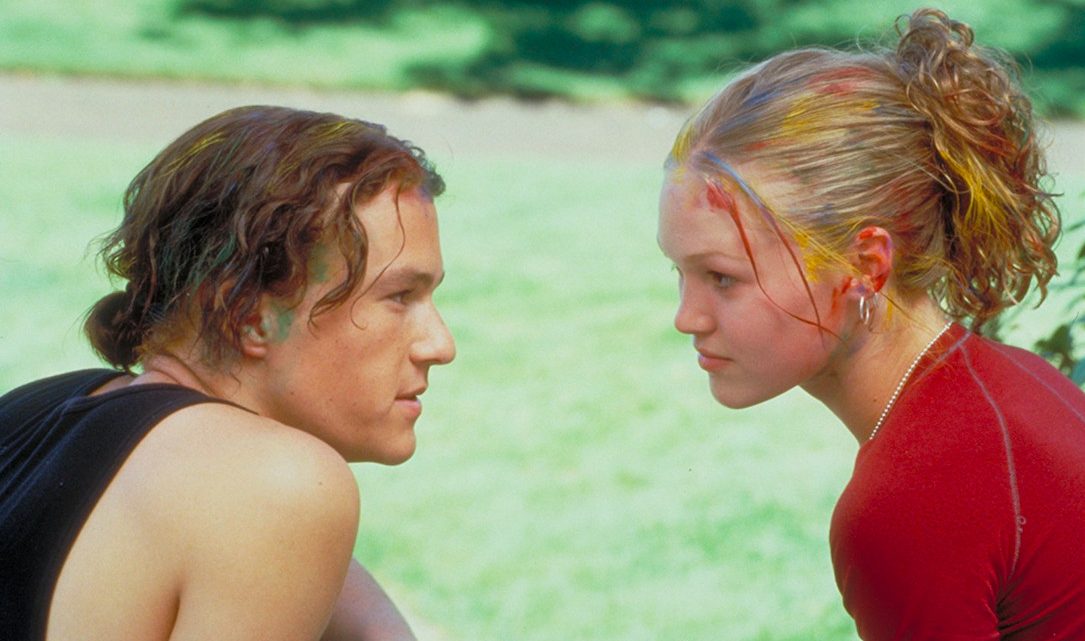 Twenty Years Later, ’10 Things I Hate About You’ Is More Relevant Than You’d Expect

For me and all the other mid-80s millennials, 1999 didn’t signal the end of an era. It was the start of our definitive teenage years, rich with all the compulsive hormone-driven drama that would ultimately shape us into the adults we went on to become.

1999 was the year I started high school; the year that I got what was, at the time, a state-of-the-art three-CD player on which I blasted TLC’s FanMail, Backstreet Boys’ Millennium, and Sugar Ray’s 14:59 on endless loop. It’s also the blessed year that 10 Things I Hate About You was released.

I’m guessing many adolescent girls—and boys, for that matter—at the time could relate to at least one of the characters in 10 Things I Hate About You. There was quippy sidekick Michael (David Krumholtz), doe-eyed and floppy-haired new kid Cameron (Joseph Gordon-Levitt), effortlessly and often infuriatingly twee Bianca (Larisa Oleynik), the tragically underrated Mandella (Susan May Pratt), and of course, the mewling, rampallian wretch herself, Kat (Julia Stiles).

Like Kat, I existed on the fringes of my fairly affluent, mostly white public school’s society, although my banishment was less self-inflicted than hers. Yes, I haunted bookstores in my spare time and plastered my room with torn-out pages from Bust Magazine and dELiA*s catalogs, but I was neither thin, blond, or a voluntary member of any sports team. I couldn’t understand how someone who could effortlessly bare an enviably toned midriff be so bold as to snub male attention, which was the only type of attention I craved as a swarthy 13 year old who had yet to be kissed.

But her defiance of conventional feminine attitudes captivated me. The idea that one could subscribe to their own ideals rather than conform to anyone else’s expectations was a completely new concept in a time when teenage self-discovery was only just taking root. I did give a damn ‘bout my reputation… but maybe I didn’t have to.

In 1999, Kat’s brand of feminism seemed pretty extreme. But looking back on it 20 years later, it’s surprising how mainstream certain aspects of it now come across.

“Every time I watch this movie Kat seems more and more relatable,” explains Sarah Barson, co-host of Bad Feminist Film Club, a podcast that reviews movies through a feminist lens. “At the time this movie came out, I think Kat was supposed to be a super ‘out there’ radical feminist, but the stuff she talks about feels very relevant to modern conversations about pop culture and a woman's right, or even responsibility, to speak up and challenge social norms.”

But according to 10 Things I Hate About You writers Karen McCullah and Kirsten “Kiwi” Smith, Kat may have ended up differently if written for today’s audience.

“I think Kat would have to have a more extreme form of rebellion,” says Smith. “We’d have to dig her even further into a counter-culture, because in that era, it was all pretty simple.”

Rather than merely dreaming of playing in a riot grrrl band, Smith says Kat would’ve already been shredding on her pearly white Stratocaster, playing her angsty songs at different gigs. Had 10 Things been written in 2019, McCullah sees a version of Kat that’s more in touch with the activism of today’s teens.

“Like, kind of the Parkland student vibe, I think. We would add a little bit more of that,” she says. ”I think those kids are amazing, what they’re accomplishing. When I think of teenagers right now, that’s where my brain goes first.”

Smith agrees. “That’s a good point, yeah. When we wrote it, we were kind of in a freewheeling 90s bubble, not really thinking about the larger world around us. Now, as Karen pointed out, the experience of the youth is much different. They’re much more global in their thinking than we were.”

10 Things I Hate About You has its share of shortcomings, although it’s held up better over time than other teen flicks of previous eras, like Sixteen Candles. I’m willing to bet that a fresh audience today wouldn’t laugh quite as hard when Kat flashes her soccer coach to help Patrick (Heath Ledger) sneak out of detention—even with his swoon-worthy dimples—or let it slide when Bianca drops the R-word during an argument with Kat. And let's not forget how “nice guy” Cameron manipulated the entire love triangle just so he could have a shot with the younger Stratford sister. Oof.

Even so, the characters' relationships with one another and even their personal shortcomings hold up relatively authentically in a way that few other movies have been able to accomplish.

“The Craft was the perfect movie for any woman who felt disenfranchised, and Never Been Kissed really did stress the importance of self-confidence and self-acceptance, but 10 Things I Hate About You was about real characters to whom average women could relate,” says Dr. Randall Clark, author of At a Theater Or Drive-In Near You: The History, Culture, and Politics of the American Exploitation Film and associate professor of Communication and Media Studies at Clayton State University.

Dr. Clark’s students have expressed surprise that Kat was open about her sexual experience and yet managed to escape some of the consequences that society tends to heap upon young women who have sex at what they consider to be a young age.

“It was just a fact of her life,” he says, giving credit to the movie for being “not at all judgmental about her past.”

The filmmakers’ non-superficial portrayal of an unapologetic and (one-time) sexually active feminist was a groundbreaking achievement at a time when few other feature films even dared to explore the complexities of teen girl relationships. In the 90s, and to some extent today, feminism is often mistakenly equated with man-hating, an idea that both writers resoundingly reject.

Earlier teen-centric comedies like 1995’s Clueless helped lay the groundwork for 10 Things by weaving together real-life scenarios with tongue-in-cheek banter that managed to entertain, but also illuminate some of the basic pillars of modern-day feminism. The fact that both are remakes of classics— Clueless being a contemporary version of Jane Austen’s Emma and 10 Things I Hate About You being a modern adaptation of William Shakespeare’s The Taming of the Shrew—that revolve around young women with BIG personalities makes perfect sense. Women finding their place in the world, and being tamed by men, is by no means a novel idea.

But one thing that many of these iconic films of the late 90s and early 2000s lack is a sense of intersectionality. Bad Feminist Film Club co-host Kelly Kauffman cites Bring It On as one example of film from this era that addresses issues of race and class that other films—including 10 Things—shied away from.

“There's definitely some parts that haven't aged as well, but on a recent rewatch, I was struck by how the movie [Bring It On] touched on sensitive issues that most mainstream movies try to actively avoid,” says Kauffman.

10 Things I Hate About You may have helped shape the modern definition of “girl power” and inspired movies like Bend It Like Beckham to depict alternative stereotypes of femininity, but it’s not perfect. The one major theme I find particularly problematic upon rewatching is the apparent lack of understanding about consent throughout the film. Kat and Bianca’s father Walter (Larry Miller) doesn’t seem to grasp the concept that sex tends to occur between two people choosing to participate. His fears are clearly distorted for comic effect, but his misguided worldview holds his daughters hostage (as Bianca points out) rather than holding their partners accountable.

This concept extends to the prom scene when Bianca’s BFF-turned-nemesis Chastity (Gabrielle Union) smugly informs Bianca that pretty boy villain Joey (Andrew Keegan) “was gonna nail you tonight,” as though Bianca wouldn’t have had a choice in the matter. Then there’s the entire plot of the film’s inspiration: in The Taming of the Shrew, multiple men scheme and plot over who could obtain the most submissive, docile wife.

But the writers are adamant that the idea of “taming” doesn’t carry over to the film.

“I think at the end of the movie, you never get the sense that her character is going to be controlled by Patrick, in terms of Taming of The Shrew,” says McCullah. “Obviously, she’s not tamed and we don’t think Patrick is the type of guy who would want to control her. That’s why she likes him.” She goes on to call him an ally, or at least a prototype for one.

Seeing a privileged angry white girl like me grapple with trust, relationships, and finding herself inspired me to follow a more unconventional path in my own right. By the end of 1999, I had moved from Sugar Ray to crust punk, spiked my hair, and amassed a collection of ballpoint pen-decorated Chuck Taylors. I eventually dabbled in dating and going to art school, although I unfortunately never did start a band. But seeing someone chase her unorthodox dreams in a world designed to stifle misfits allowed me to dream outside the box in a way I'd never been shown before.

Compared to 2019, 1999 was a relative vacuum of women in media. “There were not a lot of female writing teams when we first started,” recalls Smith. “Now it seems like the appetite for female voices and female-fronted stories is ever-expanding."

Movies like Mad Max: Fury Road and Captain Marvel, with Brie Larson starring in Marvel’s first female-fronted superhero film, prove that we’ve come a long way with female representation. Both Smith and McCullah hope the trend continues, both in their future work, in the entertainment world at large, and with the resonating impact of 10 Things I Hate About You.

As McCullah says, “I hope it keeps inspiring young girls to be badasses and not let other people define them.”

Kris Jenner Is Frequently Compared to the Devil, and the Kardashian Matriarch Seems to Like It

‘Broad City’ Made It Respectable to Be a Reckless, Messy Queen