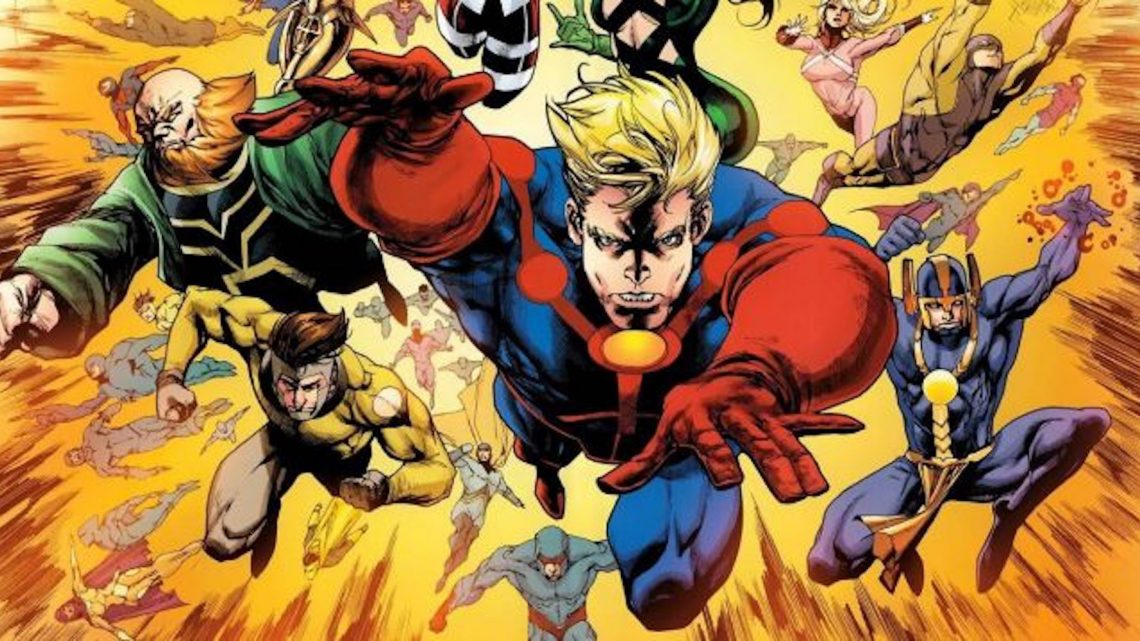 Marvel Studios is trying to keep their string of history-making firsts going. After the massive success of Black Panther and their first female-led superhero movie, Captain Marvel, hitting theaters this month, reports are floating around that Marvel may be breaking another barrier with their first openly gay superhero for The Eternals in 2020. According to That Hashtag Show, an anonymous source over at Marvel says they’re looking for an openly gay actor of any ethnicity to bring into the MCU.

As part of Marvel’s effort to spark new potential franchises, The Eternals will introduce the lesser-known group of superheroes from Jack Kirby's 1970s comics, who are part-human part-immortal beings, created five million years ago by divine entities known as the Celestials. Marvel's looking for someone 30-49 that looks the superhero part, That Hashtag Show reports, which basically means the first gay Marvel lead is going to be a swoll zaddy. Since none of the original characters in The Eternals were gay, it’s unknown whether they'll introduce a new character or alter an existing one, the report explains.

Despite Marvel having a number of queer characters in their comics, like X-Men's Mystique or Young Avengers’s America Chavez, their sexuality has yet to make it to be depicted on the big screen.

Marvel Studios head Kevin Feige has apparently had his eye on changing that for a while now, telling The Playlist last year that they’re working on introducing two new queer plot lines, one for a character that’s been on screen before and one that hasn’t.

It would be a big step for the movie to show queer romance considering Marvel has run into minor controversies for cutting queer love scenes. Tessa Thompson’s character Valkyrie from Marvel’s 2017 movie Thor: Ragnarok is bisexual, but as she told The Independent, the one scene alluding to her sexuality was cut from the movie. And Black Panther got flack from the LGBTQ community for creating a fictional black fantasyland with no queer people, and cutting a scene that had some flirty queer vibes between Okoye and Ayo. And let's not forget that time audiences were gravely disappointed by Marvel's pansexual leading superhero in Deadpool, which was supposed to be a more edgy adult-oriented flick, but had no scenes hinting at his sexuality in the first film, and only a few jokes about it in the sequel, where he also had a girlfriend.

Aside from the plot though, if The Eternals does find an openly gay actor to play their first gay superhero they'd be pushing a newer conversation around representation in the industry. In December straight actor Darren Criss made headlines announcing that he’ll no longer play gay characters because he doesn’t want to be “another straight boy taking a gay man’s role.” He’s landed a number of big roles playing gay characters following his breakout as Blaine Anderson in Glee. But his stance is far from the new norm in the industry as this past Academy Awards saw straight actors take home awards for playing queer roles, like Rami Malek for playing Freddie Mercury in Bohemian Rhapsody and Mahershala Ali who played queer black pianist Don Shirley in Green Book.

Whether Marvel finds their openly gay actor or not, their first leading gay hero is bound to shake things up. After years of not centering queer characters, and making some suspect cuts to queer-friendly scenes, audiences are eager to see Marvel movies match up to the books. The books have been faster to progress, with Marvel introducing their first gay superhero, Northstar, in 1992 and having him get married in 2012, inspired by New York legalizing gay marriage the year before. “Our comics are always best when they respond to and reflect developments in the real world," Marvel comics Editor-in-Chief Axel Alonso told Rolling Stone at the time. "They’re living life on their own terms. It doesn’t matter that it’s a superhero comic, the message is: You can do the same thing.”