When I was seven years old, I tasted a deep-fried oyster for the first time. It would be 20 years until I understood why I felt pangs of joy and guilt whenever I thought about that day.

Crunchy, briny, and golden brown, these oysters were one of my early forays into Japanese cuisine. One day, I came home from school to find this tasty treat awaiting me. Four kaki furai nestled in shredded cabbage in a Styrofoam container, with dark brown dipping sauce. “Mom, what’s this?” I asked, ever nosy when food was around.

“Fried oysters! Try it,” she said. “Dip in the tonkatsu sauce.” I picked up an oyster with my fingers.

The oysters should have been moistened by the steam in the container during my mom’s drive home from Osaka restaurant in Fairfield, New Jersey. But the panko flakes were crispy, exposing soft oyster flesh as I bit into it. The combination of crunch and sweet, tangy, smoky sauce hugged my tongue.

Mom stood next to me as I sat munching and I could smell her. An aura of pungent, savory Japanese food clung to her uniform. “Do you want one?” I said, offering her an oyster.

Even at age seven, her words held a certain weight. I felt guilty. I suspected that if she had a thousand oysters, she would offer them all to me before she ate any herself.

My mom migrated from Taiwan to America in 1985. When I turned six, she went back to work at a Japanese restaurant but would only take lunch shifts so she could spend time with me after school. My dad, a Chinese Burmese immigrant, worked long days at a Chinese restaurant to support us.

Restaurant work is tough. There are the universal struggles, like long hours of standing, lifting heavy plates, and working weekends. But there are also unexpected costs that an immigrant waitress endures at an Asian restaurant in New Jersey. The subtle racist comments like, “Oh, you’re from Taiwan? But you look mixed!” and “Wow, your English is so good!”

These were meant to be compliments. My mom told us these anecdotes with pride. After all, it meant she had assimilated into American culture. But there are hidden fees when adapting to a culture that prides itself on its American Dream—it is supposed to be difficult, grueling even, to achieve it. There, buried in the fine print—adapting means believing America is the best. 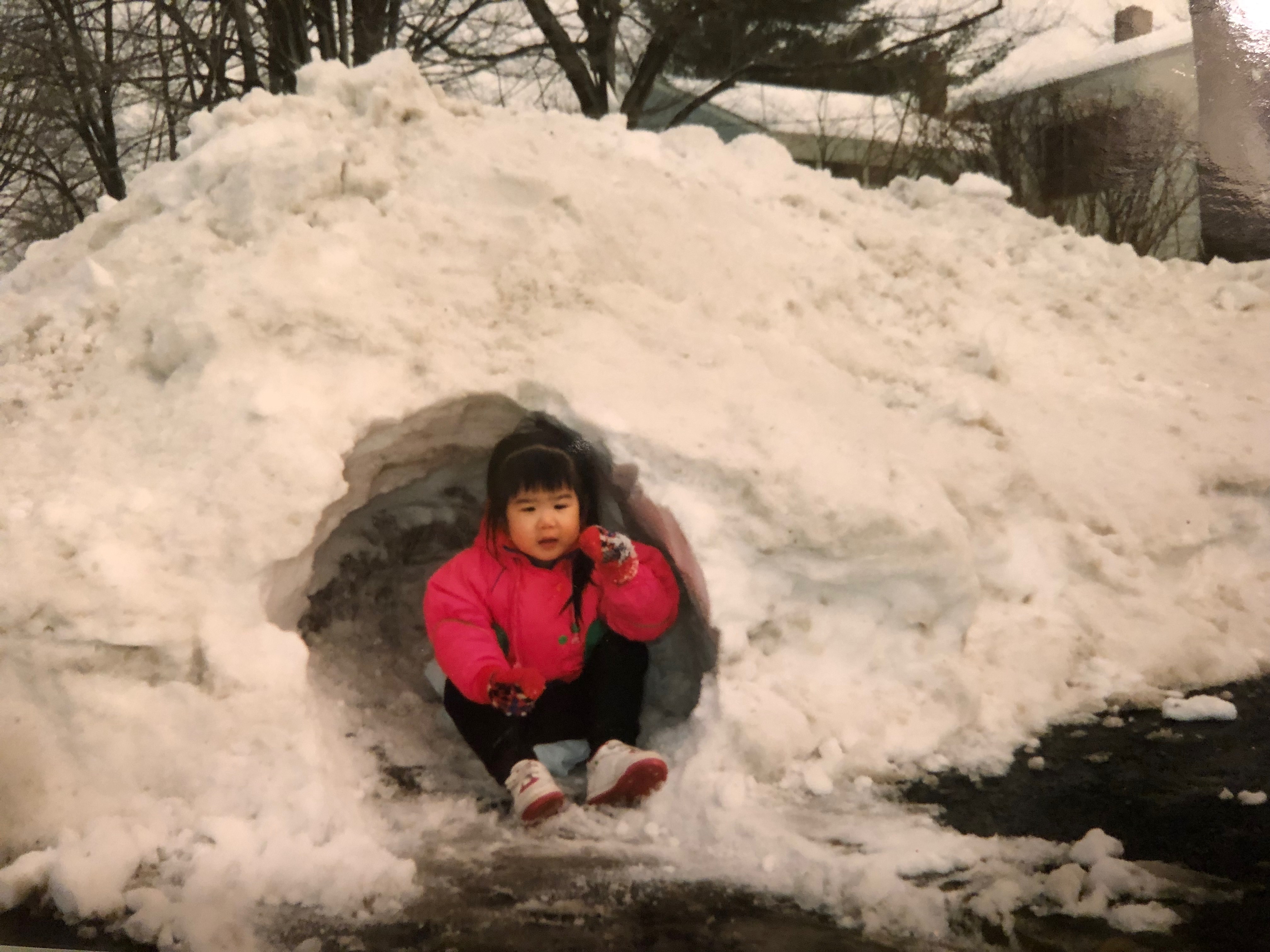 The author growing up in America. Photo from Tiffany Teng

Her friends were other waitresses from Thailand, China, Indonesia, and Korea. They commiserated about their bosses and gossiped about rude customers. They treated each other to ginger chews from their local supermarket or egg tarts from a weekend trip to Flushing. They were kind to the Mexican busboys who were and always would be at the bottom of the totem pole, amigos who cooked up fried oysters for their comrades behind the boss’s back.

Eventually, Mom started working dinner shifts when I was old enough to stay at home without supervision. Sometimes, I would cry when she left for work, wishing we could cook together instead. She prepared dinner for me every night—a well-balanced plate of rice, meat, and vegetables, sometimes salvaged from her staff meal, sealed with Cling Wrap.

In high school, I had friends whose non-immigrant parents also worked night shifts. When the topic came up, I realized that my mom didn’t have to leave dinner for me, that this was an act of love—one that was unusual for Americans, who showed love with hugs and attendance at soccer games. My parents made up for their absence with the fruits of their labor, whether it was plentiful nutritious food, a college education, a car, or a few months’ rent when I struggled to find work.

They achieved the coveted American dream. I was the next generation that they toiled day and night for, their supposed prodigy who could do great things with the abundant opportunities America gave me. Instead, I felt like a prodigal daughter.

For the past two years, I have lived in Yangon, a city in Myanmar that is 8,500 miles away from home. There is a Japanese restaurant here that serves fried oysters, along with ramen and yakiniku barbecue. I hadn’t eaten fried oysters since I was seven, as I rarely see them in restaurants.

The first time I went, I sent a photo of the oysters to my family’s group chat. “Mom, I remember when you brought this home for me from Osaka!” I said.

“You still remember, that was 20 years ago,” my mom replied.

I go there whenever I’m in need of comfort food. The oysters are delicious, but more importantly, eating them fills me with love and immense gratitude—and a twinge of guilt—for my parents’ sacrifices.

All I need is that first bite, and I’m home again.