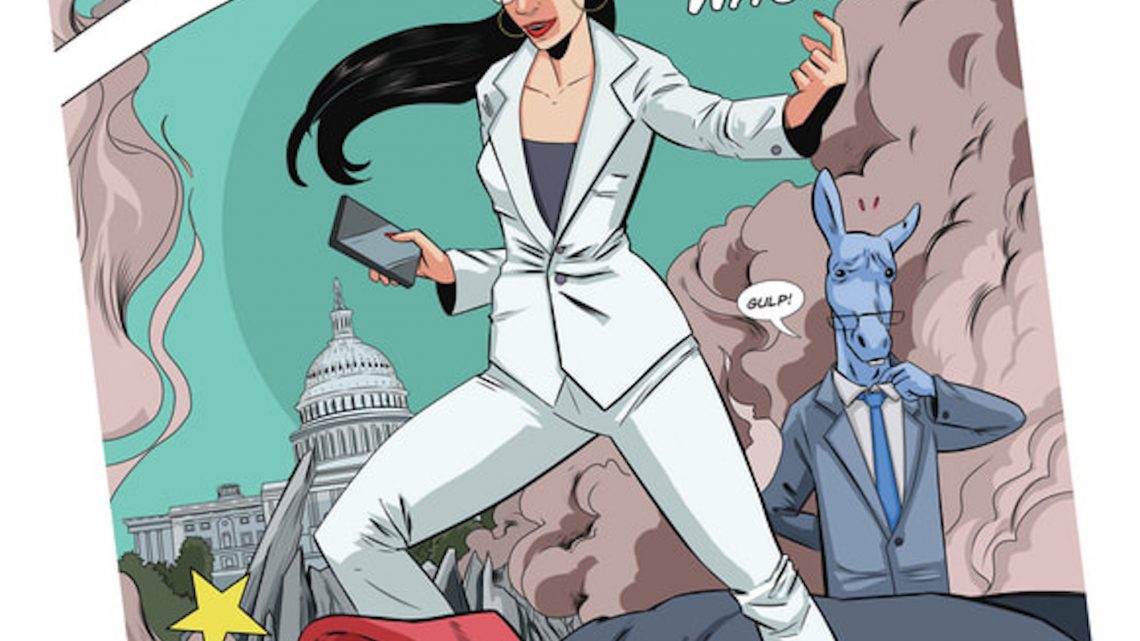 Alexandria Ocasio-Cortez's crusade to take on the Washington establishment is now a comic book specially crafted for the cross section of comic fans and political junkies. Alexandria Cortez and the Freshman Force: New Party Who Dis, out May 15 from Devil’s Due comics, features the stories of AOC and other progressive women shaking up the halls of Congress, created by dozens of artists from across the country.

“The stories run the gamut from cute and sweet, to cathartic venting stories, to just irreverent fun plots, all with the general theme that this is a pro-AOC, pro-new Congress project,” Devil’s Due publisher Josh Blaylock told VICE. As of yet, there's no over-aching plot the stories build toward, but each give their own interpretation of this current moment in politics. In a page given to TMZ, AOC is a super-jacked wrestler who defeats her former Democratic opponent Joe Crowley in the ring and then bumps into an even-more-jacked Nancy Pelosi with a six-pack in the locker room.

Ocasio-Cortez wasn't involved in making the book, but when TMZ tracked her down in the halls of Congress on Wednesday to get her take she said, "It’s an honor people would put so much of their time and talent into that all on their own. I’m especially honored that they’re donating the proceeds to Raices Texas [a non-profit that provides legal services to immigrants and refugees] for immigration protections. So that part of the project, if it can benefit communities that need it, that’s really amazing." When asked what she thought about being a wrestler in one of the stories she said, "I’m just a normal person doing her best. If I can be that for a little girl somewhere where she can see herself being a superhero, I think that’s important for all of us to see we all have a super hero inside of us."

The comic's subtitle, "New Party Who Dis," is from an AOC tweet she sent in January responding to old-school former Democratic Senator Joe Lieberman, who told Fox Business he “hopes she’s not the future” of the party.

"That was an awesome lightning-in-a-bottle moment,” Blaylock said. "It was hilarious to see Joe Lieberman, a perfect example of this tired old outdated system, commenting on the future, and Ocasio-Cortez with such a millennial response." But what really “lit a fire” under Blaylock to work on this project was a tweet from AOC in which she quotes the popular Watchmen graphic novel, sending comic fans into a frenzy. The tweet was in response to a quote tweet that linked back to a Politico article with the headline "Exasperated Democrats Try To Reign In Ocasio-Cortez." She wrote: To quote Alan Moore: "None of you understand. I’m not locked up in here with YOU. You’re locked up in here with ME.”

"When I saw her Alan Moore quote, on top of her jumping into a feed of a guy playing Donkey Kong 64 to talk about trans rights, and seeing that she’s a League of Legends fan, I thought there’s too much nerd press going on here," Blaylock said. "If we don’t do this right now somebody else is going to beat us to it."

Blaylock got the book on the radar of comic book stores just in time for a May release and started calling up dozens of friends in the comic world. "The response was immediately great. We have a great diverse group of talent," he said. "We have people from all over the country, and I’m excited to see everything coming in." Contributing artists are also some of the biggest heavy-weights in the industry, like Jill Thompson, known for her work on Wonder Woman comics, and Tim Seeley, whose working on G.I. Joe and Transformers comics. 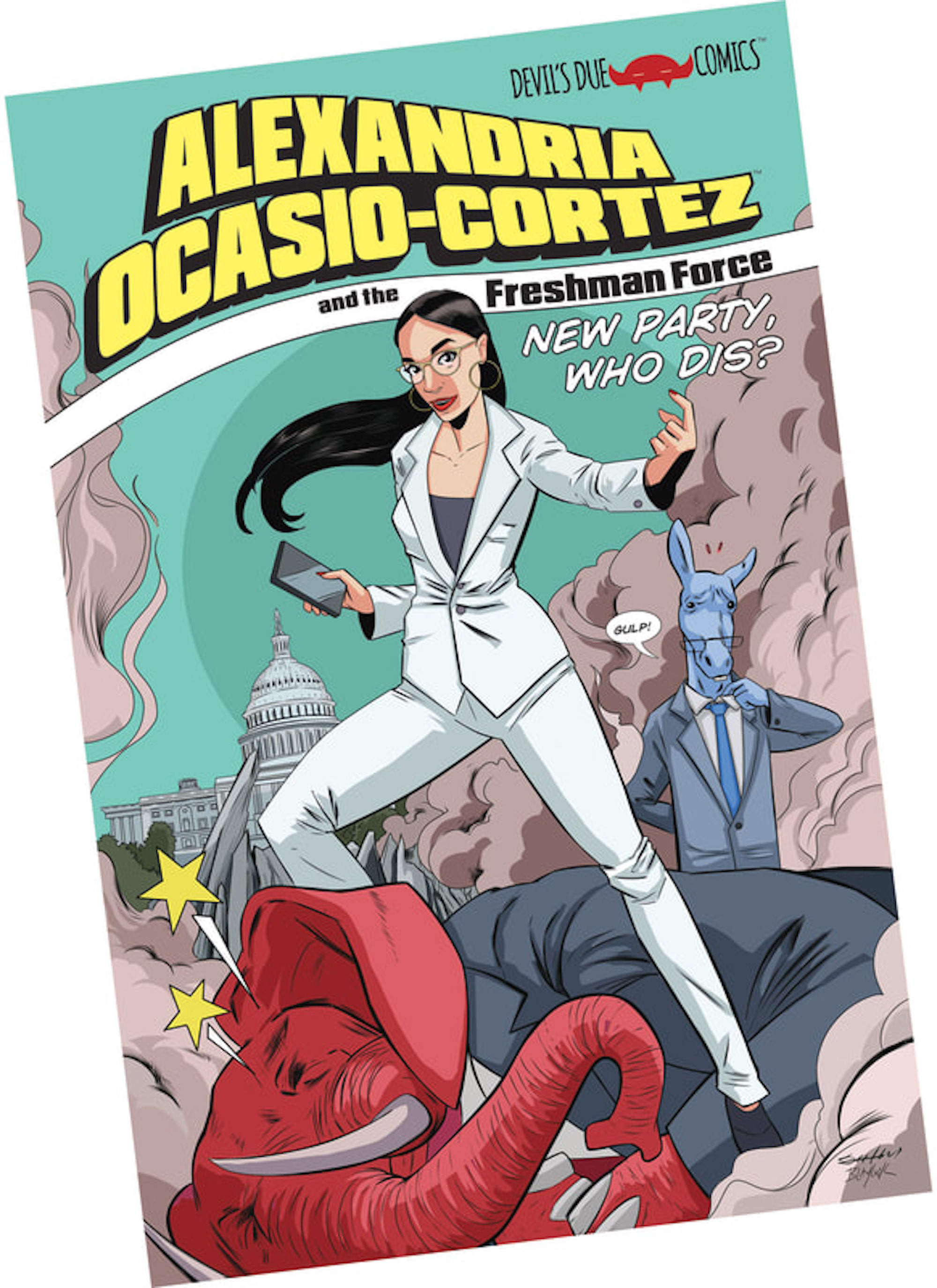 Art by Tim Seeley and Josh Blaylock, with Nick Accardi, courtesy of Devil's Due

The comic, which according to the website is printed on recycled unpaid medical bills, features witty references and hot takes on a cast of political characters, from entrenched players like Nancy Pelosi, Bernie Sanders, and Mitch McConnell, to Ocasio-Cortez’s fellow wave-makers Ayanna Pressley, Massachusetts's first black congresswoman, Kyrsten Sinema, the first openly bisexual Senator, and Ilhan Omar and Rashida Tlaib, the first Muslim women elected to Congress. The first two Native American congresswomen, Sharice Davids and Debra Haaland, are also part of the "Freshman Force." It's currently a one-off project with two different cover image options, one where AOC rocks a superwoman-esque 'fit tackling an elephant to the ground, and another where she hits the same moves in a power suit.

The book is meant to capture the excitement of those ready for a change of guard in Congress. “I feel like we’re having an intervention, like someone sitting a family member down saying, ‘Look we have a problem and we need to fix it right now. There’s no more tip toeing around these issues,’” Blaylock said.

“There are so many issues that so many of us have wanted to see addressed that have been completely ignored by all politicians it seems," added Blaylock. "And now to have 100 people in there—obviously we haven’t heard from all of them—but just to see such a good mix of representation and hear conversations happening now about topics we’re really all concerned with, I like to say it’s been a jolt of smelling salts to a comatose system.”

Vacuum Cleaner Gangs Have Stolen Over $100,000 from UK Parking Meters