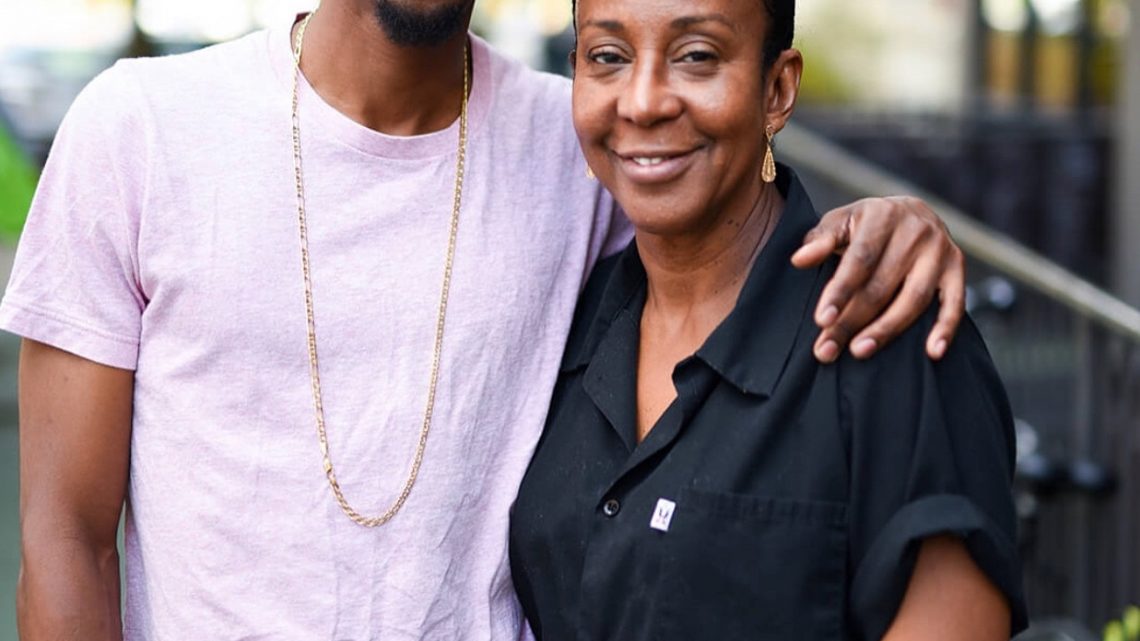 VICE's #BlackLove series celebrates the bonds between Black people through intimate, powerful, and uplifting narratives of love in all its forms. Through these stories, we honor the art, activism, and beauty that grows from black love.

Harlem’s Seasoned Vegan feels like your mama’s house. There’s black art on the walls and a steady stream of soul tunes slipping from the speaker as you walk in. If you’re lucky, you may dine right next to some of those artists, like Stevie Wonder or India Arie, both of whom are fans of the restaurant. There are plates of macaroni and cheese, BBQ crawfish, and chicken parmesan. And as is tradition in any black home, there’s the matriarch in the kitchen, orchestrating these foods as their aromas waft into the other rooms, making your mouth water. If it weren’t for its name, you may not even realize Seasoned Vegan is a plant-based restaurant.

Brenda Beener, known as Chef B., is the founder and head chef. Her secret, I believe, is the perfect combination of love and, well, seasoning. Her restaurant is built on the idea that food is love, which translates into every aspect of the place and accounts for the warm feeling that envelops you as soon as you step inside.

Beener’s 33-year-old son, Aaron Beener, is general manager and co-owner. Their family has been vegan since the 1990s, when her husband emerged from a 21-day fast with a desire to remove all animal products from his diet. Chef B. was a stay-at-home mom at the time, and she welcomed the chance to make her already delicious food even more nutritious for her family. She “veganized” the Southern and creole staples passed down from her mom and created meals that eventually brought the whole (skeptical) neighborhood knocking. Together, Brenda and Aaron officially opened Seasoned Vegan in 2014.

I sat down with Brenda and Aaron to talk about Seasoned Vegan, how they “veganize” Southern food, and the love that’s kept them in business for five years.

VICE: Seasoned Vegan literally grew from a mother’s love. Chef B, how did you ease the family into its new vegan diet?
Brenda Beener: It wasn’t easy. My food spent a lot of time visiting the garbage pail as I was trying to perfect it. [Laughs] I would use my children as my taste testers, and it was not passing the test.

Aaron Beener: It wasn’t that your food wasn’t good. It was that you weren’t cooking how you normally cooked.

Brenda: I was following a lot of recipes from a few vegan cookbooks. The food was very bland. One day, I decided to just cook my old dishes and eliminate all meat products. And when I started veganizing my food, it started tasting better. “The food you love veganized.” That’s Seasoned Vegan’s slogan, which came about through the genius of my son. I imagine in the 1990s veganism seemed like an extreme—and not necessarily a healthy one. 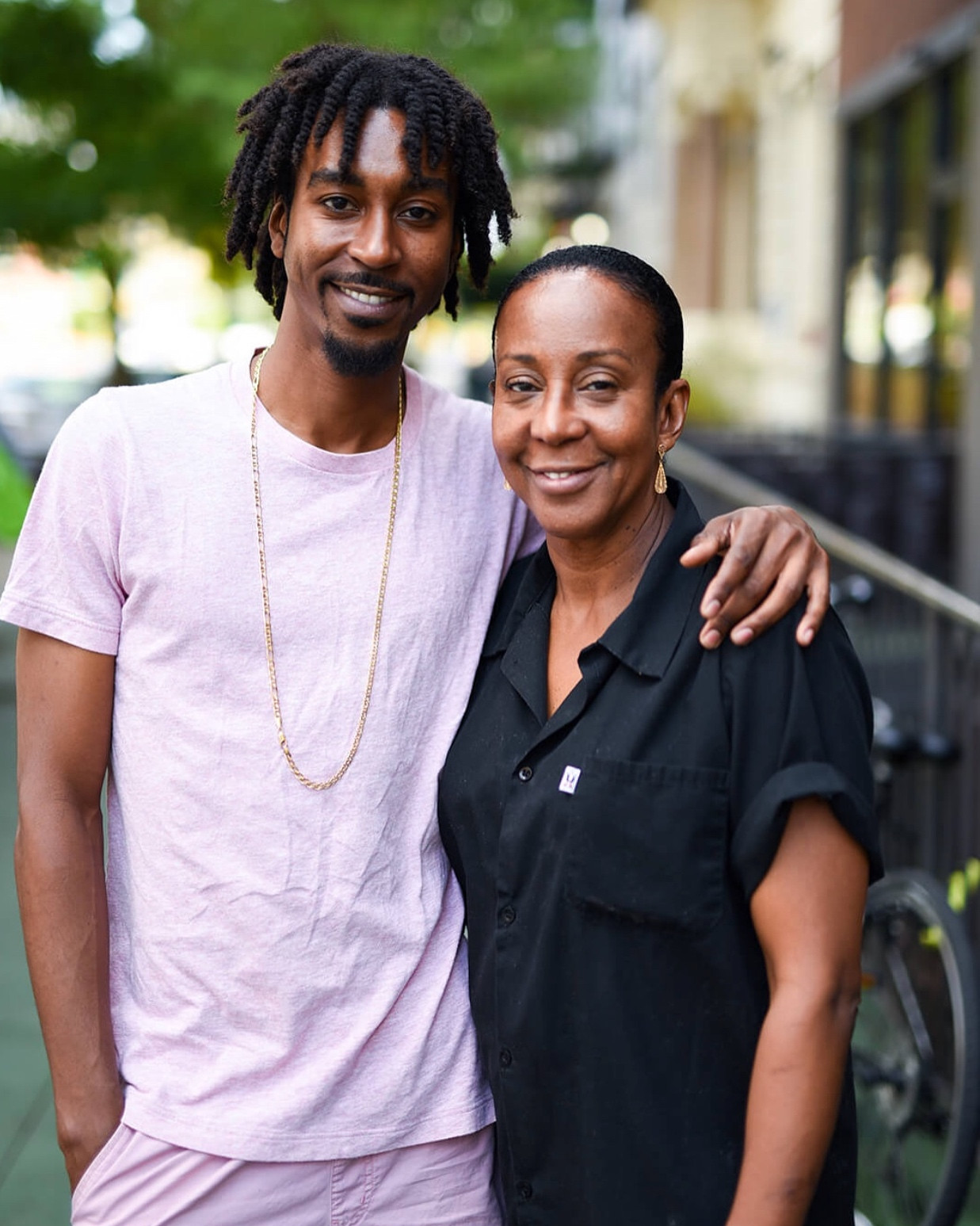 VICE: Was it difficult eating vegan in Harlem at that time?
Brenda: There was no real support from family or friends.

Aaron: I had already been the weirdo at school, just by not eating red meat and pork.

Brenda: The whole family was considered pretty weird. If you didn’t eat meat you were strange, there was something wrong with you. It was taboo. We were stepping outside of culture. We were not invited to quite a few places.

VICE: Aaron, did you ever question your mom or dad about being vegan as a kid?
Aaron: No, because my only other option for food was school lunch. And school lunch never looked better than what I had—ever. It always smelled good in our house, too. Like, mad good.

Brenda: I was always cooking.

Aaron: She made dinner every night.

Brenda: That’s what I was accustomed to with my mom. You know, on Sundays, people cook big meals. My mom would have Sunday dinners every day. I raised my children the same way. So we had big, full meals every day.

Aaron: We had rice, yams, spinach, a mock meat. My favorite were the stuffed shells, the manicotti. Mom’s got a special power with her palate. She can eat something, and then come home and make it, and then add stuff to it to make it taste better.

Brenda: I was determined to make the food taste good because the few vegan places that were open, they were just opening packages and heating up the food. I always felt that was so disrespectful to the food and to the people they were selling it to. You owe people a plate of food that tastes good, that’s seasoned, and I couldn’t understand why it wasn’t.

Aaron: Once it got good, though, it was, like, a thing. People would just “randomly” show up at our house for dinner. You’d see them in the kitchen sneaking food into foil. They would always say, “If I could eat like this, I could be vegan.”

VICE: Is that where the idea for opening up Seasoned Vegan came from?
Brenda: I really wanted my mom to open a restaurant when I was younger. I grew up in Louisiana and my mom used to feed just about the [whole] neighborhood. If you came to my house, you were eating. If you knocked on the door and said, ‘Oh, can you fix me such and such,’ my mother would give it to you. That was a Southern thing.

VICE: What did you grow up eating as a kid in the South?
Brenda: We would have gumbo a lot. We had a lot of seafood, stewed shrimp, roast beef, stewed chicken, baked chicken. My mom was a fresh vegetable preparer, so we would have fresh mustard greens, fresh collard greens, string beans, snap peas, sweet peas.

Aaron: Come on now, keep it funky. You were just telling me the other day all those nasty things y’all would eat.

VICE: Chitterlings?
Brenda: Yeah, we ate chitterlings. But you know how chitterlings smell [bad]? My mom was the only person whose chitterlings never smelled. It was the way that she would clean it. My mom was really into cleaning her food. When she was making chicken, you would see just a pile of fat and she would peel all of that off of her food. So I grew up doing that, when I was preparing chicken and stuff, scraping all the fat that’d be gelled and stuck under the skin. And we didn’t really do pork ribs, but we did beef ribs. My brother became a Muslim when I was very young. He would come home talking about, “We can’t eat pork.” So pork was eliminated from our diet. And one good thing about my mom, she really listened to what we wanted to eat.

VICE: What made your mother’s food so good?
Brenda: I now wonder was the true cleanliness of my mom’s food what made the difference? I think it shows when someone really cares about the food they’re making and the people they’re making it for. That energy transfers into the food. Now, it might just be that they’re spending more time preparing, making sure it’s clean or making sure they’re using the freshest ingredients, but I also think that love transfers.

VICE: I feel like, in a lot of black homes, food is love. How have you brought that idea into Seasoned Vegan?
Brenda: I set an example by that. One thing I’ve told my cooks is the same thing [my mother told me]: If you don’t feel like cooking or you come in with an attitude, don’t go near my stove. Stay away from my stove, because that vibration goes into the food. If you’re going to step to my stove, step to my stove with love. I don’t need you stepping to my stove when you’re angry or upset, ’cause then my food is going to be no good.

Aaron: I feel like “Food is love” is the founding principle of Seasoned Vegan, because that’s just what it is—it was, like, supporting our dad in being healthy right from the beginning and then spreading that healthy idea to [my mom] and then to me and my sister, and then being an example for our community with the people.

VICE: So you see Seasoned Vegan as a way to provide Harlem access to better eating?
Aaron: Just healthy living in general for everyone. When we were writing our business plan we said we wanted Seasoned Vegan to be a beacon of healthy living for all of us. We have to raise our vibrations in all areas of our lifestyle. Eating plants helps because they’re mostly alive still. They’re metabolizing, so they’re giving you life energy, and it helps to raise your overall vibes. We wanted it to have good music here, we want it to be a spot that feels good, we want it to be a spot where you’re not afraid to meet the person next to you and maybe you foster a relationship with them. We want you to come through and get hugs and stuff. We wanted to be a living example of how our neighborhood could—all those aspects of our culture could be increased.

Brenda: I used to love the show Cheers, and I’d always say I would love to have a place where you come and people know you and they greet you. Once we opened this restaurant, a customer said to me, “Wow, this is just like Cheers.” I almost sunk through the floor because that’s exactly where I was going.

VICE: How has your relationship as mother and son grown or shifted as you’ve built this restaurant?
Brenda: All of my life, I’ve always just depended on myself. If I wanted something done, I would just do it. I walked into this business the same way. I was just concerned with cooking, I wasn’t concerned with the business side of it. So we clashed a lot because of that. Mainly on my part. But I needed my son, and I had to humble myself a lot. I had to step back and have other people give me advice or we had to come together before we make a decision—that was rough. This is my son, I’ve always told him what to do, and now I have to sit back because he knows more about the business part than me. I had to learn to truly trust my son. I’m stepping back more and more and I’m liking it because he’s amazing. He is amazing. I tell my son I am so blessed he came through me. And so happy for the person that he is. I couldn’t have done this without my son.

Brand Twitter Is Absurd, and It Will Only Get Worse

This Florida Man Destroying Roger Stone on Infowars Is So Satisfying