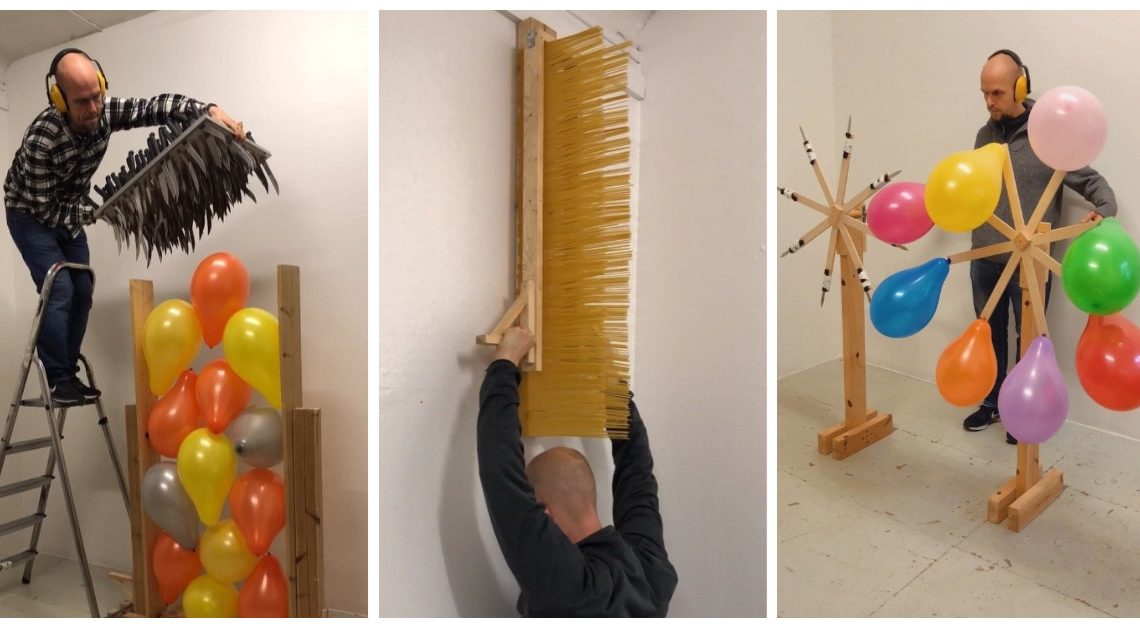 That’s a lot to sort through, but I’ll add one more instantly gratifying craft to the mix—the art of balloon and pasta destruction, of which Norwegian visual artist Jan Hakon Erichsen is Instagram dot com’s foremost purveyor.

As Erichsen notes in his Insta bio, “You should really, really, not try this at home.”

The Oslo-based artist has only been posting bite-sized clips of his ruinous creations to Instagram for just a little over a year, but has already racked up an impressive online following. Though he also uploads compilations of these “Destruction Diaries” to YouTube, the project certainly feels Instagram-first, and unsurprisingly that’s where it has really taken off—his new posts almost always garner six digit view counts on the platform.

Besides people @’ing their friends over and over again in the comments, Instagram users often ponder some version of “WTF is this?” on Erichsen’s posts. So, I hit up the dude and asked just that, albeit phrased a bit more professionally (maybe).

As opposed to some sort of grand pronouncement about the world or life or love or whatever, the artist told me via email that the genesis of the videos was basically boredom and spare materials.

“I had just finished a longer time consuming art project and just wanted to make something short and funny for my own amusement,” he said. “I just took some parts I had lying around my studio and decided to make a contraption to destroy something. I filmed it with my phone and decided to share it with a few friends on Instagram and it has just escalated from there.”

And thus, begun, the spaghetti war, has.

Though, again, I do not recommend attempting anything like this at home, Erichsen told me he “hasn’t ever gotten badly hurt” in the making of his art, “only some scratches and bruises.”

“I try not to rush into things and always test the more dangerous contraptions thoroughly before filming,” he said. “I’m more scared that other people will get hurt trying out my stunts, I sort of know what I’m doing.”

The bulk of the knives, he says, were bought at a dollar store, with the rest being more “typical carpenter knives.”

“The knives obviously don’t really need to be [too] sharp to pop [balloons], but most of them are quite sharp anyway,” he adds.

Personally, I think the secret sauce to these often viral vids is the potent mix of DIY kinetic art mixed with some Japanese mascot-esque tomfoolery (Erichsen uploads his failed experiments as well as his successes, and often shows moments of flailing before a successful balloon pop or pasta smash). Also, it doesn’t hurt that there are often sharp things (knives) involved in the clips, an often critical component to #oddlysatisfying art.

“If people only see the humor in the videos that is fine by me,” he said “Hopefully some of my more dedicated followers will see that it is more to it than just laughs, but it is by no means necessary to understand my references to enjoy my work.”

Government Workers Are Still Waiting on Payouts from the 2013 Shutdown