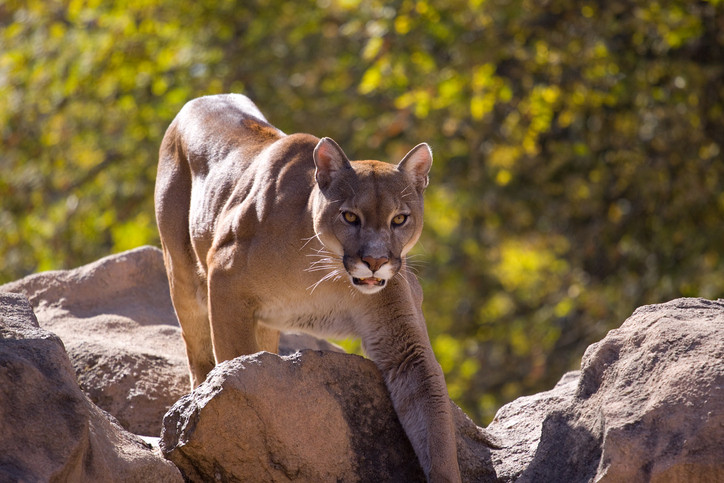 Imagine this: You're out for a pleasant, casual jog in the Colorado mountains, sucking down deep breaths of crisp pine-scented air, staring out at the grassy foothills, when suddenly you hear a strange sound behind you. It's getting louder, getting nearer, as if something (or someone) is closing in on you. You turn around, and there it is: A mountain lion—a fucking mountain lion—coming straight for you. It pounces at your head and bites you in the face, rips at your wrists, tears into your arms.

This is it, right? This is where most of us would probably just give up, accept the fact that there's no goddamn way we are going to come out on top here, curl up into a ball, and get mauled to death. But somehow, a jogger managed to survive just that attack on Monday, fending off a mountain lion with his bare hands until, eventually, he killed it—and no one knows exactly how he pulled it off, the Denver Post reports.

The man, who hasn't been identified, was trail running on Colorado's Horsetooth Mountain when the cat charged him from behind. It bit his face and wrists, and left him with cuts on his arms, legs, and back, according to Rebecca Ferrell, a spokeswoman for Colorado Parks and Wildlife. He "partially blocked" the mountain lion with his forearms, started brawling with it, and scrambled away. Then he went on the attack.

According to Ferrell, he managed to get on top of the cat and "suffocate" it with his bare hands. Whether that means he smothered the thing somehow or actually choked it to death, no one knows.

“It’s an amazing story. Everyone is baffled and impressed,” Ferrell told the Denver Post. "He had no weapons, no knives or trekking poles with him. How did he do it? It’s pretty rare."

Battered and bleeding, the guy hiked off the mountain and took himself to a nearby hospital, where he's currently being treated for injuries. He asked Colorado Parks and Wildlife officials to grab the gear he left at the scene of the attack, which they've since found—along with the animal he killed.

There's no word on how long the man might be in the hospital—the Denver Post described his injuries as "serious"—but Wildlife officials plan to interview him about what went down Tuesday. Hopefully, they'll get a clearer picture of how in the actual hell he managed to kill an 80-pound, fang-toothed cougar using nothing but his bare hands.

SOTU Address: Trump Delivered His Speech Very Well, But Too Little, Too Late