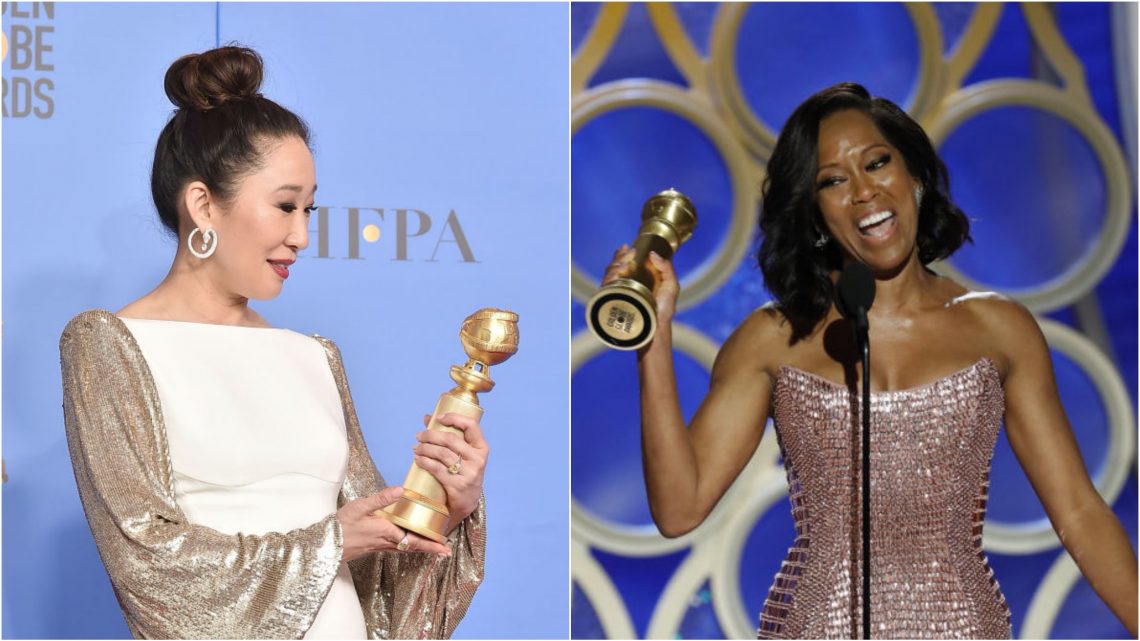 Why It’s Important for Diverse, Emerging Artists to Win Awards

The 2019 Golden Globes talked the talk, but didn’t walk the walk.

At face value, the Golden Globe Awards were the picture of progressive values: Sandra Oh and Andy Samberg skewered Hollywood for being overwhelmingly white and male. The camera lingered on actors and actresses of color, heralding a changing of the guard. It was super queer and sexy—remember when Olivia Colman called Rachel Weisz and Emma Stone “her bitches?”, or when Lena Waithe walked onto the stage looking like a besuited snack.

But at the end of the day, the Hollywood Foreign Press Association mostly gave out awards to the same white men it always does, with just a few exciting and notable exceptions. The two women of color who visibly won Golden Globes last night were Oh and Regina King, and their acceptance speeches were two of the most poignant, memorable moments of the entire broadcast.

The gap between bonafide movie stars and emerging talent can be tricky to navigate during awards season. It’s assumed that Meryl Streep will take home a statue or two most years, and we know what to expect from her when it happens.

This year, we got Glenn Close winning best actress in a drama for her role in The Wife, and while she seemed utterly shocked to be receiving the statuette, she managed to use her time at the microphone to advocate for women. “It was called The Wife. I think that’s why it took 14 years to get made,” Close joked before delivering a rousing, impassioned plea for women to buck expectations and follow their dreams.

On the other hand, winning an award can be career-defining for emerging artists. “That’s how stars are made. When you are nominated, you instantly become recognizable and known in ways that you might not have been before, [...] and it tends to bode well for the rest of your career,” says Dr. Darnell Hunt, Dean of Social Sciences at UCLA and co-author of the annual UCLA Hollywood Diversity Report.

But when it comes to the opportunities afforded to award-winning actors, it helps if you're white. Actors like Emma Stone or Timothée Chalamet come to mind as examples of young artists whose careers have been boosted by awards recognition, whereas POC award-winners like Jennifer Hudson or Jamie Foxx haven't had the same post-win exposure or opportunities.

Actors whose moment in the spotlight could be a once-in-a-lifetime opportunity tend to make the most of it. When she won best actress in a supporting role, motion picture, Regina King began by recognizing the other POC creatives behind If Beale Street Could Talk and thanking her loved ones—including her son, who was at the Golden Globes wearing a #TimesUp pin. King told screenwriter and director Barry Jenkins, who adapted James Baldwin’s novel, that when her son watched Beale Street, he said it felt like the first time he’d seen himself on screen.

Then, as the orchestra began trying to play her offstage, King seized the moment to vow to achieve gender parity on all the projects she produces in the next two years, and challenged other employers—within and outside of Hollywood—to do the same. It was a stunning moment of proactive activism.

Sandra Oh kept her acceptance speech for best Actress, TV drama short and sweet, by contrast. (Technically, as a co-host and a winner, she had the largest platform of all.) But her speech was incredible because it was so genuinely joyful. “Oh, daddy,” she yelled triumphantly to her father, who was watching from the audience. “Oh my god!” After thanking her coworkers on Killing Eve, Oh turned her attention towards her parents, speaking to them in Korean and bowing in thanks. Alongside the Roma creatives, who accepted their awards in both English and Spanish, Oh helped normalize intersectional language representation at the Golden Globes, which is important.

Oh used her opening monologue with Samberg to earnestly acknowledge the importance of representation, saying she took the hosting gig as a way of showing viewers her “face of change.” The producers of the Globes then cut to closeups of other actresses of color in the audience like King, Indya Moore, Lucy Liu, and Octavia Spencer.

Except for King and Oh, those women were seen but not heard during the 2019 Globes. Imagine how moving a speech by Moore, one of the trans actresses of color starring in POSE, would’ve been. Or what Billy Porter, who also stars in POSE and was perhaps the best dressed celebrity last night, may have wanted to say. It was great hearing from Alfonso Cuarón, the director of Roma, but I wonder what his breakout star, Yalitza Aparicio, could have added to the conversation.

It's important to train decision makers to not only recognize diverse artists, but enable their career trajectory beyond awards season. “I think Hollywood has traditionally loved young, white actors. Period,” Dr. Hunt adds. “Look at someone like Jamie Foxx, who won an Oscar several years ago, and has had a decent career, but you’re not seeing him in the same way you see some of these other actors, who seem to be working all the time in these major films. [...] The Emma Stones of the world are much more likely to get that. That’s just the way Hollywood has operated over the years and the way the industry is structured.”

It’s important to remember what awards actually represent: the opinions of a small group of industry insiders. But awards are used as barometers of artistic quality, and winning best picture will ensure that movies like Green Book and Bohemian Rhapsody are included in the pantheon of “great films” of our era, whereas others will get overlooked. Awarding these films also incentivizes studio execs to make similar films down the line, to recreate their success.

Groups like the Hollywood Foreign Press Association wield a lot of power in these situations. They’re offering Bohemian Rhapsody the opportunity to be known as a Golden Globe-winning film, instead of one directed by accused rapist and abuser Bryan Singer. And they’re enabling Green Book to perpetuate a revisionist narrative, instead of confronting America’s racist history and learning from it. They recognize and award the same people, over and over. Controlling a narrative is a form of power. It’s important that we’re choosing the narratives we want to uplift.

The Wild Story of Whitaker Wright, the Con Man Who Killed Himself in Court