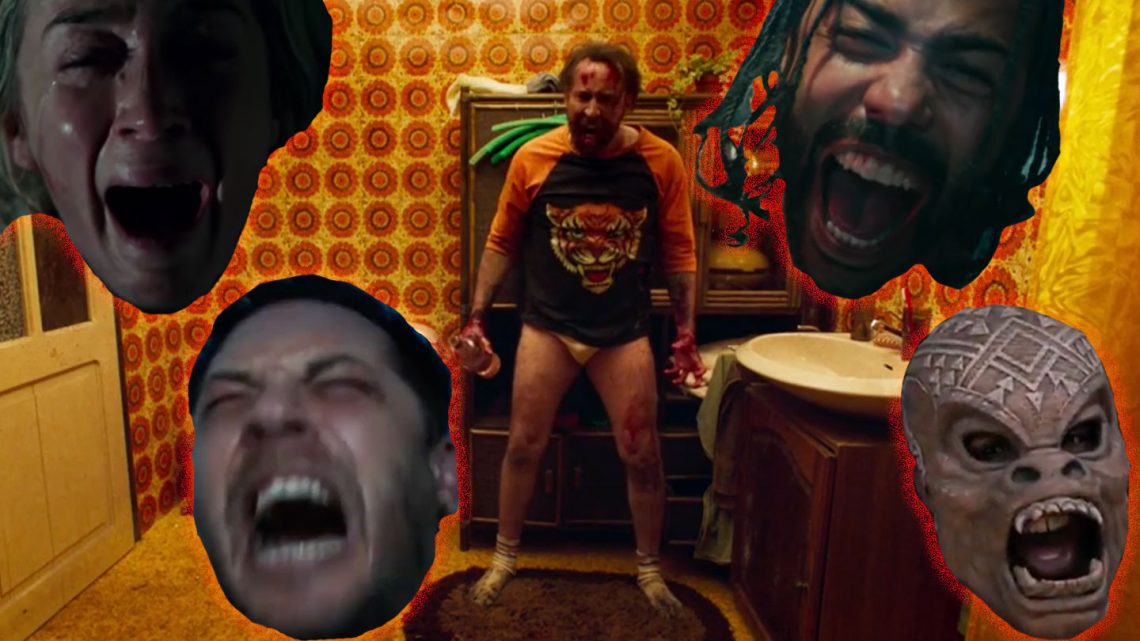 The Ten Most Blood-Curdling, Heart-Pounding Movie Screams of 2018

The last 12 months have essentially been one ceaseless, unending shriek. The news was dominated by stories of school shootings, wildfires, climate change, volcano eruptions, poverty, income inequality, that Eagles fan who ate horse shit, Brett Kavanaugh, and children in migrant detainment camps. The list could go on and tortuously on.

Intentionally or not, Hollywood responded in kind. This year’s movies included unusually high-quality screams that capture the mood du jour in the United States and beyond. Bellows, howls, shouts, cries, hollers, roars, squeals, wails, and yelps conveyed dark shades of emotion for which words are simply too weak.

Some of the best screams come from movies that won’t win Oscars, or even Golden Globes, come awards season. But this list is about the screams themselves. These aren't mere jump-scare grunts, blurted out of gut instinct. Ranked below are the ten most powerful, earth-shaking, soul-wrenching verbal utterances we heard in theaters this year. Beware of spoilers.

You know something’s about to go down when an MRI machine shows up in a movie, especially a superhero movie. Either someone’s getting a devastating diagnosis, or something really creepy is about to happen in that machine. Tom Hardy as journalist Eddie Brock lets out a literally inhuman shout as he almost transforms into the unhinged beast that makes this Marvel film so fun.

In a year where Nic Cage is on screen and screaming, it would be a grave offense to not include him on a list like this. He’s got a lot to holler about in Panos Cosmatos’s Mandy, a psychedelic occult horror vengeance film involving apocalyptic bikers, niche religious zealots, a giant crossbow, and a homemade battle ax. After a devastating blow to his hermetic life as a lumberjack, Red Miller (Cage) goes on a coke, vodka, and LSD-fueled rampage. In between the devastating events of the setup and the devastating carnage of the resolution, Cage delivers a devastating, carnal howl while swigging liquor and wearing only his underwear and a shirt with a tiger on it.

As in every Marvel movie, there’s a lot of screaming in Black Panther. There’s the time King T’Challah fights Erik Killmonger, loses, and falls off a cliff, the time King T’Challah fights Erik Killmonger, falls off a cliff, and then wins, and of course, “WHAT’RE THOOOSE?” But there’s no yelling in this movie more iconic or memorable than the monkey king M’baku’s rhythmic war chant. It shows up again as one of the most thrilling moments in Avengers: Infinity War, and someone even remixed it into a song. Delivery is this guttural bellow’s biggest strength, since it’s such an addictive rhythm for creating hype in any competitive situation.

The strongest part of Carlos López Estrada’s hallucinatory statement about the criminal justice system, cultural appropriation, gentrification, friendship, masculinity, and mental health was Daveed Diggs’s performance as its star, Collin. For most of the movie, he absorbs the overwhelming number of topics Blindspotting addresses while serving his last few days of parole. He lets loose a climactic scream when he’s face-to-face with a cop he saw gun down a black man earlier in the film. The catharsis is tangible.

6. The House That Jack Built

Lars von Trier’s latest film was so violent, 100 people walked out of one festival screening. He got in trouble with the MPAA for screening an ultraviolent version of the film. One of the most devastating screams in a movie full of serial killer torture and murders is when Matt Dillon’s Jack invites his victim to belt her guts out when she realizes he’s going to kill her. Given von Trier loosely based the premise of the film on the moral depravity of the Trump presidency, it’s a highly relevant scream.

5. Sorry to Bother You

Lakeith Stanfield is wonderful in this movie and pretty much every project he’s part of. One of his screams in Sorry to Bother You comes at a pivotal moment when the movie transforms from quirky corporate satire a la Office Space into something bigger and weirder. It’s the kind of scream you only let out when the entire nature of your reality has been flipped on it’s head. So like, every three months of 2018 tbh.

Every single loud noise is gut wrenching in John Krasinski’s directorial debut, A Quiet Place, which takes place in a world where aliens kill anything making a sound louder than a whisper. If your first thought at this premise was, “Well then how does childbirth work,” then Emily Blunt’s climactic scream toward the end of the film is for you. The predominantly quiet film leading up to the moment Blunt’s character is literally trying to have a baby silently is designed to make this scream impactful.

The saddest scream on this list comes courtesy Toni Collette, who delivers a howl so raw it'll make your throat hurt just listening to it. It’s also unique as it happens offscreen, as she discovers her daughter’s now headless body in the car her son was driving the night before. Shit is whack.

One of the most disturbing scenes in Alex Garland’s biological horror art film Annihilation was when the death knell of a traveling companion is somehow absorbed by an undead-looking bearlike monster. The bear uses the devoured woman’s voice to lure in its human prey, and in one scene it bellows directly into another woman’s face with the voice of her dead friend. Cannot unsee or hear.

The moment in A Star Is Born's breakout hit "Shallow" where Lady Gaga just fucking unbuckles and belts out the thick, juicy “Ahhhh aaahhhh aaaaaaAAAAAAAA” is the scream we should all aspire to scream. Maybe next year.