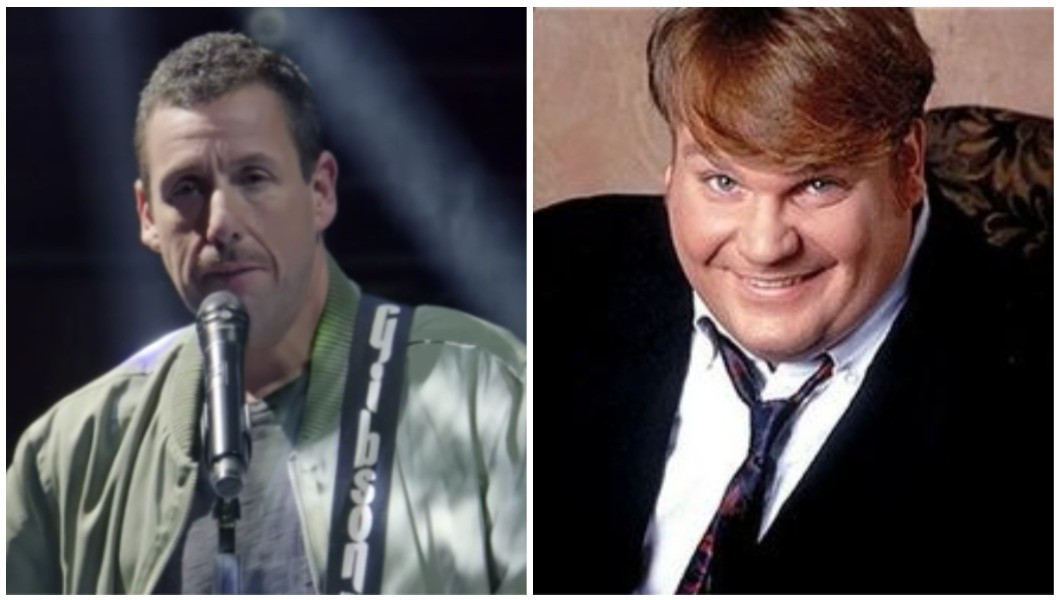 It's been 21 years to the day since Chris Farley, the frenetic god of physical comedy, passed away. His wild and raw bits on SNL were sometimes gravity-defying, like his fluid, ballet-like dance in the iconic Lunch Lady Land sketch, and just as often used gravity to painfully funny effect, like when he crushed a coffee table during his turn as motivational speaker Matt Foley. His influence was so widespread that he's had documentaries made about him and been memorialized in countless rap songs.

Adam Sandler sang a tribute to his longtime friend and collaborator in his latest Netflix special, 100% Fresh. The melancholy, Don McLean-sounding ballad revisits in equal measure Farley's most rib-splitting antics, his friendship with Sandler and fellow SNL alum David Spade, and his untimely death at the age of 33. There's a show-stopping moment where Sandler describes one of the last times he saw Farley alive, which was at actor Tim Meadows's wedding. The next time he saw his friend, Sandler sings, was at his funeral.

Netflix released the song in full today in remembrance of the iconic comedian. You can check it out, along with a tear-jerking montage celebrating Farley's life and accomplishments, in the video above.

Each Chicagoan Owes $140,000 to Bail Out Chicago Pensions

So Maybe Twitter’s CEO Did Ask Azaelia Banks for a Magical Amulet?