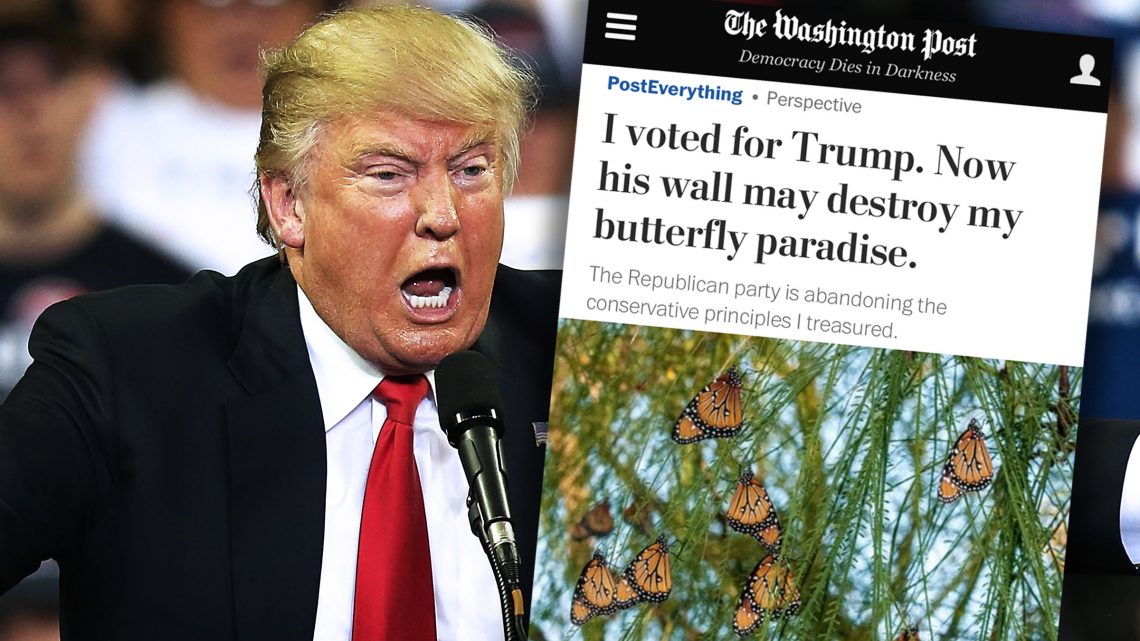 "What does it take for a Donald Trump voter to renounce their decision?" is a question worth exploring as 2020 approaches, especially considering the fervency of his followers, who often seem less interested in policy, and more fixated on the bogus immigration threat and alleged conspiracies against their beloved leader.

On Monday, the Washington Post published an op-ed headlined, "I voted for Trump. Now his wall may destroy my butterfly paradise" by Luciano Guerra—an educator at the National Butterfly Center in Mission, Texas, near the border—who said he voted for Trump because he's a small government–loving "lifelong Republican" who doesn't "want open borders." Guerra maintained that he never took Trump's threats to build a wall literally. But with the wall—funding for which the president has threatened, however credibly, to shut down the government over—poised to damage his butterfly sanctuary and the surrounding environment, as well as a wildlife refuge and a state park, Guerra is rethinking everything.

"We dread the destruction that will come when the bulldozers arrive, which could be as early as February," he writes, explaining that he went to his first protest to voice his opposition to the wall. "When the president says there’s a crisis at the border that requires an action as drastic as building a massive concrete wall, he either knows that it’s not true or he’s living in an alternate reality."

"If Donald Trump runs for a second term, he will not get my vote," Guerra concludes.

Perusing the online response to Guerra's op-ed, the impulse was to mock. "Owned," one person wrote. "Trump has gone too far," another deadpanned. But Guerra's case offers interesting insight into how Trump's behavior can actually cost him support—one of his policies might materially harm Guerra, so the butterfly enthusiast is turning his back on the president.

Of course, this isn't a hard and fast rule. As the Washington Post reported in July, in the 15 states hit hardest by Chinese tariffs issued in response to Trump's "trade war," his approval rating remained high—at 57 percent, according to their survey. “President Trump has my support now, but that could always change,” a supporter whose farm business was negatively impacted by the tariffs told the paper. “Personally, I’m in wait-and-see mode.”

Earlier this year, in a piece for Vox, Dylan Matthews questioned "an unspoken assumption of most political punditry"—that policy and political platforms "play a significant, perhaps decisive role in determining the outcomes of elections," asserting that except in extreme cases, there isn't a "plausible position a politician or political party can endorse" that would have "a meaningful impact on their likelihood of retaking political power." Guerra's decision to vote for Trump—despite the border wall being one of the president's central campaign platforms—illustrates the disparity between who someone votes for and what they believe in.

Of course, Trump's rise to power in itself is the perfect illustration of the notion that politics is not about policy, but, rather, cult of personality. Matthews framed the average American's interest in politics as a hobby, which can be picked up and dropped at ease, noting that, according to one study, a mere "20 to 40 percent of Americans 'hold stable preferences on salient economic public policies.'" That is, less than half of the public seemed to have a consistent worldview as expressed in a set of coherent stances on the things politicians talk about, which might in turn allow them to hold said politicians to account for their actions. But Guerra's story suggests that when a leader's policy directly threatens their day-to-day existence, the average person's hobbyist approach to politics can fade away.

So where does this leave anti-Trump candidates vying to win the 2020 presidency? It might make sense for them to emphasize the ways in which Trump's policies have directly hurt (some of) the people who voted for him in 2016, and in general, focus on how their own policy proposals would better those people's lives. But if Trump's electoral success has taught us anything, it's that if a Democrat wants to win in 2020, they won't do it on policy alone. When it comes to elections, a strong personal brand is the key to triumph—the policy stuff comes later, if at all.