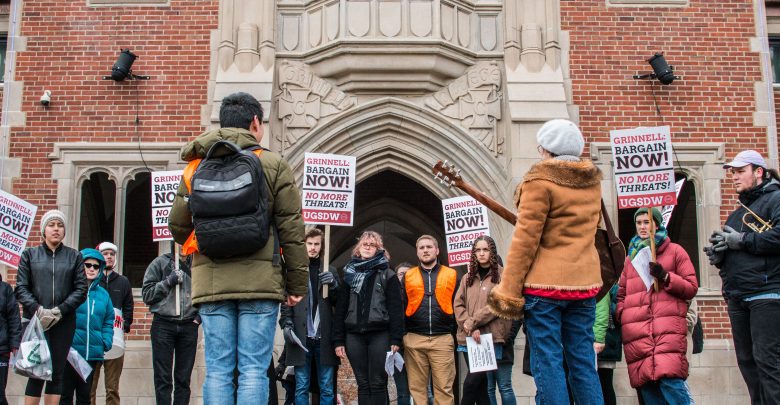 A small college in the middle of Iowa has become the focus of labor activists across the country, as student workers brace for a long-term battle against their administration and the feds. Grinnell College, a hallowed institution that boasts about its social activism, self-governance, and "graffiti in the library bathrooms," on Monday appealed to the National Labor Relations Board (NLRB) after the body's regional office in Minnesota declined to deter students' unionization efforts. It's a simple story riddled with bureaucracy: Though undergraduate student employees in dining services successfully formed a union at the college in 2016, the first of its kind in the United States, they now want to unionize all student employees across campus.

The powers that be do not like this idea.

But administrators had not previously sought to deter the Union of Grinnell Student Dining Workers, or the UGSDW, as they're called, and the recent pushback came as relative shock to the student workers. It's just the latest example of outwardly liberal institutions across America panicking when workers exercise real power and threaten their bottom line.

"One of reasons I applied here was because of that commitment to social justice the school talks so much about and market so much," Andy Pavey, a freshman at Grinnell and the press secretary for the UGSDW, told me over the phone. "It's really disheartening to see that that might have been a façade."

The administration, for its part, has primarily cited the concern that certain student-work positions might ultimately interfere with learning and the general atmosphere at the school. But it retained Proskauer Rose LLP, a law firm that has teamed up with Ivy League universities in the past and gained plenty of notoriety for fighting against workers, particularly in pro sports, to assist.

"Our concern is not with the union," Debra Lukehart, the vice president of communications at Grinnell College, wrote in an email, citing the institution's relationship with the Teamsters, its need-blind admissions process, and its particular approach to education inside and outside the classroom. "It is with the expansion of union representation to include students serving in roles that are academic opportunities first and foremost and how this could negatively affect the Grinnell community."

But Pavey said the union had won 9 percent wage increases and bonuses for students working up to ten hours a semester, established a formal grievance procedure (for those believed to have been fired or reprimanded unfairly), and even equal pay for high school students on staff.

The unfolding saga has heightened national relevance because it may push the NLRB to reverse a precedent from 2016 in which it determined that, yes, student workers at the nation's private colleges have the right to unionize. It's a stance the feds have flip-flopped on repeatedly, as the politics of the NLRB tend to shift with the partisanship of the person living in the White House. (The commander in chief appoints board members to five-year terms.) In 2000, student workers were deemed employees, after a ruling in favor of teaching assistants at New York University. In 2004, after a few years under George W. Bush, they were suddenly not employees, after a decision regarding graduate students at Brown.

The 2016 decision reestablishing the right to unionize came amid a dispute over student assistants at Columbia University in New York, after Barack Obama had left his mark on the board.

"It's surprising and ridiculous that the college has gone from fair concerns—like privacy and the academic liberty of professors, which we addressed—to what I can't find any rationale for," Nate Williams, a junior who's heavily involved in union, told me over the phone. "They're putting the entire country, putting all working students in the entire country, on the line in order to bust up this union of undergrads at Grinnell College."

The real question at the moment is less about whether Grinnell or another college or combination of them will push to overturn what was settled on with Columbia, and rather when.

"I would say the chance of the Columbia decision getting reversed in the next year or so is very high," Jeffrey Hirsch, a law professor at the University of North Carolina, Chapel Hill, told me over the phone. "Whether it's this case, or another, I'm less sure about. And that goes to the undergraduate issue. I could see the board wanting to use a graduate student case to flip Columbia, just because it fits with what more schools are dealing with."

In recent years, student workers have been able to unionize largely by avoiding getting the NLRB involved in the matter, and affiliating themselves with other national unions, primarily the American Federation of Teachers or United Auto Workers. (According to the Guardian, Harvard, Brown, and Columbia have all stated that they're willing to bargain with their respective student unions, and graduate student workers at Brandeis in Massachusetts ratified their first contract in September.)

The Grinnell situation's focus on undergrad workers stands apart from most recent precedent.

"That definitely makes it unusual," said Cynthia Estlund, a professor of law at New York University. "Undergraduates tend not to do teaching, for example, like graduate workers. But I don't think the Board that it would come before would be in any mood to be drawing those fine distinctions. In theory, they could say Columbia stands, but this case is different... I think they can and probably will use it to overturn Columbia, if they get the chance."

The NLRB declined to comment for this story, but did direct me to the case page, as well as a flow chart about the next steps—which appeared, from my eyes, to point to a process that will play out for a long time.

"Sometimes, this process can go fast, but the board certainly isn't the quickest ajudicator in the world," Hirsch said. "And when you have a big issue, where they're reversing—if they use this case to reverse Columbia—it will take longer, because the majority decision will be longer than a typical decision, and you'll also have lengthy dissents. So it could easily be a year, or more, even.

That leaves the students stuck in a sort of limbo, waiting for a decision to be handed down. They're doing so actively, though, gathering support from alumni (more than 100 of whom who signed a letter to the student newspaper), and trying to galvanize their fellow classmates as finals week approaches. Meanwhile, even if this might seem like a small-bore saga at a tiny institution in the middle of America, albeit one with the potential for ripple effects nationally, it comes with the country at a crossroads pinning corporate behemoths against citizens, and populism and direct action on the upswing.

"We're at a moment in history when unions go beyond, even more than they have in the past, the workers and the unions," Williams, the student activist, said. "In addition to the implications on our campus, this is really a site of seeing where the next decade will take us in terms of: Will we continue to see a sort of rise in corporate power and these large institutions that get to say what goes on in people's lives, or are we going to see a rise in democratic and popular power?"

In ‘Mary Queen of Scots,’ Even Queens Are Screwed Over by Men Around Them