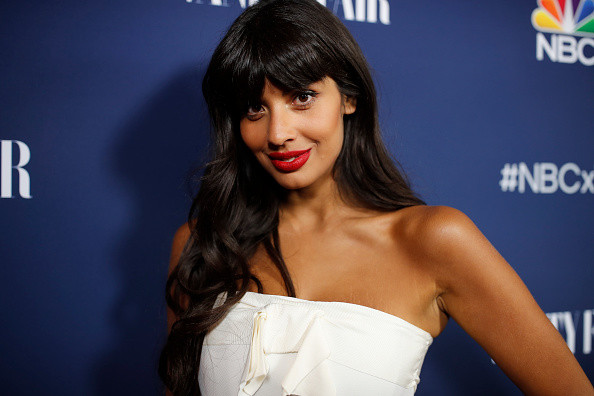 Breakout actress Jameela Jamil, who plays Tahani Al-Jamil on The Good Place, has been wooing fans with her larger-than-life personality on social media, where she finds funny, offbeat ways to discuss serious social issues. Most recently, she dragged Cardi B and other influencers who peddle harmful diet products, practically turning the whole twitter-sphere into eyeball emojis. In her next venture, she’ll apparently be using her skills as a provocateur to ask a bunch of "cringeworthy questions" as the host of a new game show, Deadline reports.

On TBS’s The Misery Index, two teams will rank a series of funny yet terrible real-life experiences on a scale of how miserable they are, based off of the card game Shit Happens. Each team will be made up of one contestant and two people from Impractical Jokers, a hidden-camera show on TruTV.

We couldn’t think of a better person than Jamil to cut through contestants’ BS and shatter the facade that life in 2018 is a-okay, which, you know, it definitely isn't. The show will reportedly rely a lot on her keen ability to find the funny side of life’s absurdities. For her part, Jamil told Vulture she’s excited to get a chance to focus on other people’s problems for a change.

“As someone whose life is just a series of mortifying incidents strung together, it’s going to be brilliant to take a break from my own mishaps, and feast in the disasters of others,” she said. “I cannot wait for the misery to commence. This show is brilliantly ridiculous.”

Hopefully, we’ll be getting a few personal stories from Jamil, too—a lot of her biting jokes are punctuated by her spilling her own tea about why she developed whatever gripe she might be riffing on, with this latest tirade against diet products being a prime example.

The Misery Index has the potential to be pretty funny, maybe even a little cathartic. And with Jamil heading the ship, it’ll probably also go a good bit deeper than just your average game show.

Artists Like Damon Davis Are Transforming the Image of Blackness

Democrats Still Don’t Seem to Know What Winning Looks Like