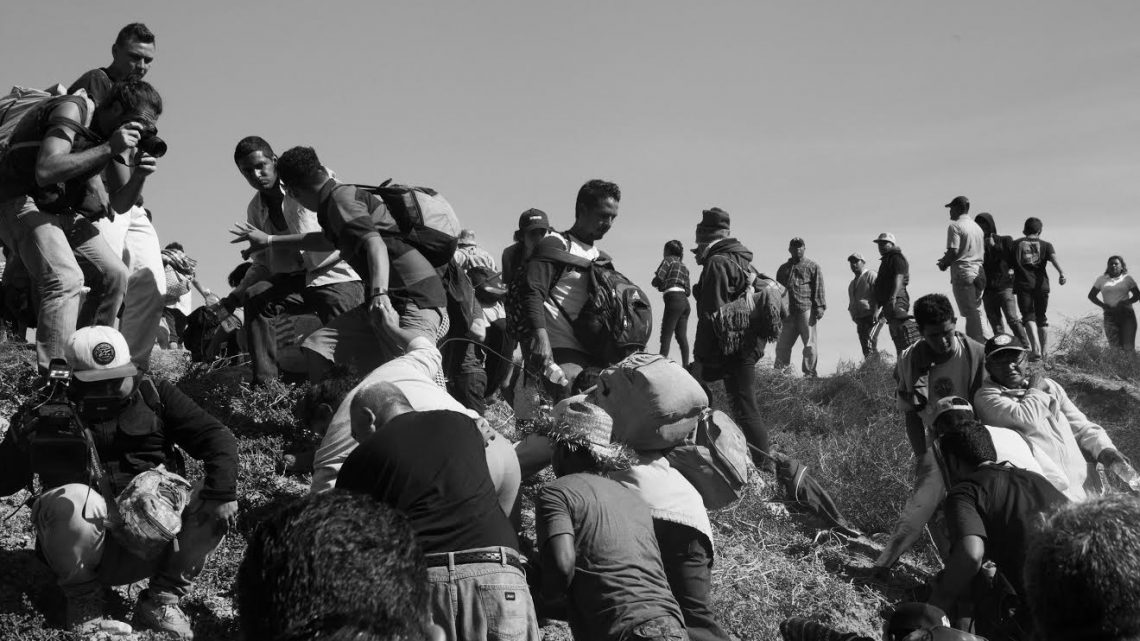 On Sunday morning, Edsel Ariel Benitez got a familiar call from his boss, urging him to come into work and relieve the other cook at the San Diego KFC. For the 19-year-old community college student, who was born in San Diego and lives in Tijuana, picking up a shift means navigating the largest land border crossing in the world. And on Sunday, things were extra complicated: The San Ysidro Port of Entry was shut down as US law enforcement met a border protest by migrants with tear gas. So he made his way toward the Otay Mesa Port of Entry, about 15 minutes east.

“Once I got to Otay, you don’t even know the surprise that I got. The line was something I’ve never seen before,” he said. “Easily it would have taken three to three-and-a-half hours to cross that day.” He waited an hour, barely moving forward, the stress of angering his boss hanging over him. Then he saw the San Ysidro border had reopened after hours of closure. He headed there and found it nearly empty except for the armed border guards, the dirt mounds, and the barbed wire, all intended to ward off migrants.

“Honestly, it looked like a war zone,” he recalled.

It wasn’t until after he finally made it to his job after a seven-hour-trek, worked a two-hour shift that paid him less than $20 after taxes, and headed back home to Tijuana that panic set in. “I don’t know when it will happen to me that I’ll be in the border when the Central Americans think to cross again by force, and maybe in that moment the US agents grabs me and, I don’t know, beat me and blast me with pepper spray,” he said. “Just because I’m there.”

This is the new reality for transborder, or transfronterizo, students—young people who cross the border daily to go to school and sometimes work. The transborder experience starts as young as preschool for some, and extends to college for many others, including Benitez, who crosses to attend San Diego City College about 25 minutes away from the border. Crossing for these students comes with a particular set of traumas and anxieties. They endure intense scrutiny and discriminatory practices from Border Patrol agents, aren’t sure how long a crossing will take—a long delay can mean getting fired or suspended from school—and worry that a confrontation with authorities could lead to issues for them or family members who might be undocumented. Even those who are US citizens or legal residents can feel intimidated and dehumanized by the grind of this routine.

After 9/11, a crackdown at the border resulted in more walls, longer wait times, and harsher inspections and questionings. Under Donald Trump, the government has cracked down further on the border, with the president seeking to restrict asylum seekers’ ability to come to the US, spreading fear about the “caravan” of Central American migrants now at the border, and demanding that a border wall be built.

At the US-Mexico port of entry dividing Tijuana and San Diego, there is already a wall, and the people who cross it every day, including transborder students, are now concerned that a repeat of Sunday’s event will further disrupt their lives. “I’m afraid that this situation will continue this way because you never know when they’re going to close the border,” said Benitez. “Not only that it will affect those of us who have to work. It prevents us from getting to work on time, and that takes money away from us, or causes us to get suspended.”

While closures and violence at the border are far from new, the last few weeks have seen an uptick in closures. Customs and Border Protection (CBP) told VICE that there have been five incidents of lane closure since November 13, which were caused by the installation of “port-hardening materials” (like jersey barriers and wire) to prepare for the arrival of the migrant caravan, the removal of portions of those hardening materials, and additional preparations for and responses to the demonstrations by migrants in the caravan.

The heightened level of militarization has given rise to a deeper sense of fear and intimidation for daily commuters. Countless photos and video have appeared on social media showing armed military personnel standing watch, barbed wire and fencing erected around sections of the border, and armored vehicles on patrol. An Instagram post shared by the arts group Border Click claims migrants, protesters, and one of their photographers were shot with rubber bullets by CBP officers on the US side during Sunday’s protests. In response to questions about the incident, CBP told VICE, “Trained CBP personnel employed less-lethal devices to stop the actions of assaultive individuals attempting to break into the U.S.” 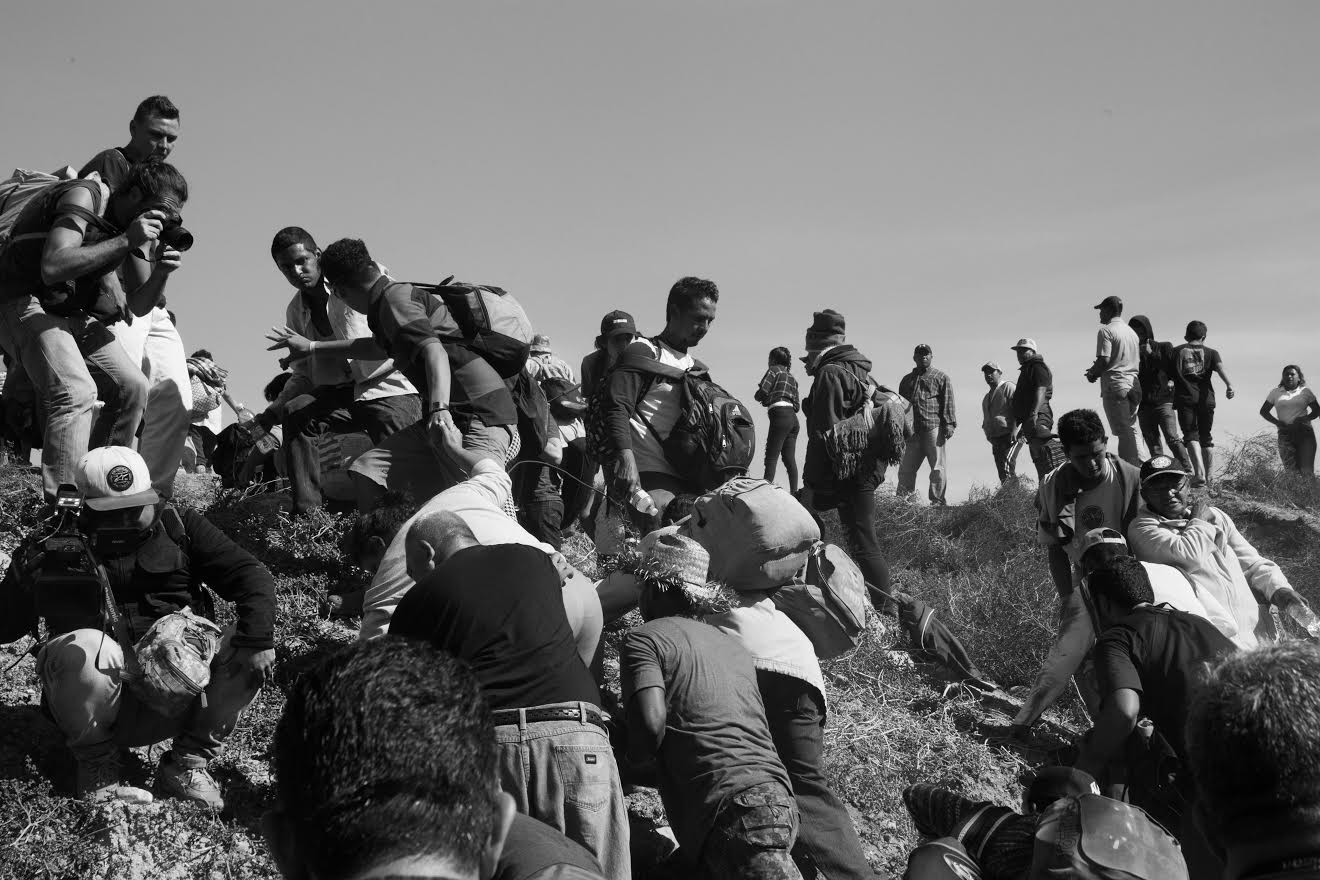 “I guess I was just used to it, crossing and seeing fucked-up things, seeing deported people, people struggling, people waking up really really early just to make money to support their families. But I don’t think I ever saw CBP in riot gear, and now they are,” said Andrea Dominguez, a 28-year-old student at City College. “It makes me sad. No one wants to leave their home country. No one wants to cross the border. No one wants to do all that. They’re strategies of survival for the working class in Tijuana, and people in San Diego, too, who are coming to Tijuana because of the housing crisis.”

Central American refugees are still waiting in uncertain conditions at the border, activists continue to provide aid and document the situation, and at least some of the troops are staying in place, where they could remain through Christmas.

When it comes to the refugees waiting in camps in Tijuana for their chance to apply for asylum, many transborder students are conflicted. The fears and frustrations they feel are often pointed at the migrants, though they are empathetic to their struggle.

“I understand what they’re going through. I don’t think they way they’re going about it is correct, but I’m not angry at them,” said Benitez. “I know they are also looking for a better life and looking for opportunities just like we are.”

Students Say They Prefer White Male Professors: We Cannot Allow That, Can We?