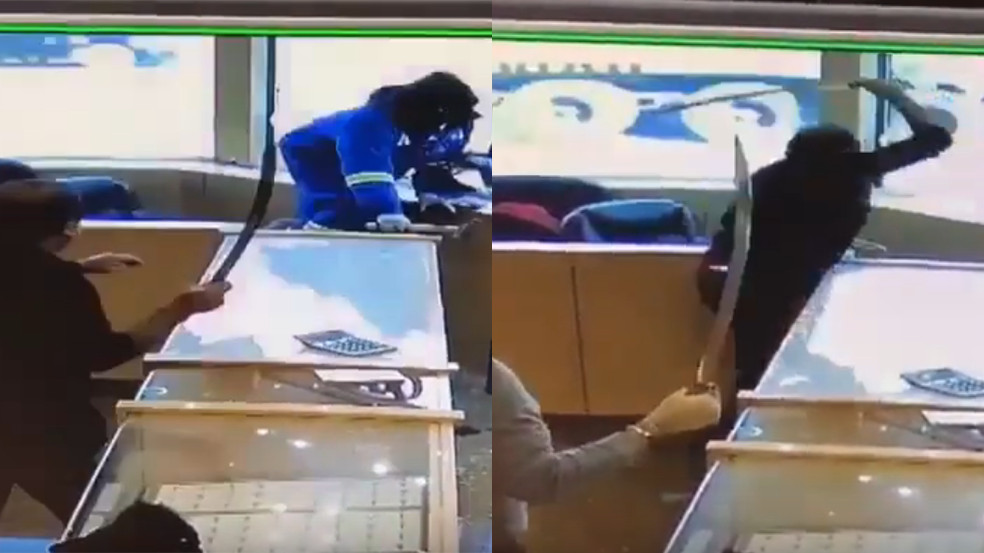 There are a lot of things people use for home protection—guns, dogs, baseball bats, a mean uncle, etc.—but few are as intimidating as a giant goddamn sword.

If someone comes at you with a sword that is a person who doesn’t give any fucks about getting blood on their shirt. That sentiment only doubles if that person uses a sword to fight off someone with a gun.

It also makes for one hell of a video and that’s exactly what we’re here to talk about. On Wednesday, at Ashok Jewellers, a small jewelry store in Mississauga, right outside of Toronto, three men with swords chased off four would-be robbers, at least one who was armed with a handgun. Now, thanks to a video released by the Mississauga Police alongside the original security cam footage means we can offer you, our fair readers, a multi-cam breakdown of this insanity.

We’re going to start with the crew pulling up to the store in a Dodge Durango (just imagine some good Stones cut playing as they pull up—maybe I suggest something from Sticky Fingers?)

Let's get going, shall we?

The crew hits the sidewalk and empties out immediately. Sprinting to the window is our main antagonist, Man In Blue Coveralls #1 (we’ll call him Blue 1 for brevity’s sake), well, Blue 1 gets to the window quickly and is followed by two people in dark street clothes.

Now, the reason I’m showing you this portion isn’t the group of three getting to the building lickity splitly, no, it’s the straggler who waits a few seconds after the heist crew gets established at the window to finally get out of the car and catch up. This is Man In Blue Coveralls # 2 and I have lots of questions about him. Why is he so tardy? Did he have trouble getting his seatbelt off? Did he slip? Was he asleep? Is his heart just not in this life of crime?

Smash cut to the interior of Ashok Jewellers.

Here a nice man seems to be helping a nice woman look at some jewelry. All of a sudden though, CRACK, that sense of calm is shattered when the window is… well, shattered. Blue 1 just fucking takes a giant hammer to the window and buddy just goes to town. Glass goes everywhere as he starts knocking it all away so he can climb in. The woman and salesmen exit out of the videos frame as Blue 1 finishes up clearing it.

It will be entry time soon—this is going well for the robbers.

Look this, in all honesty, might be the perfect five-second gif. The man leans in with the hammer triumphantly leading the way to riches and glory but then, out of freakin’ nowhere, this man in black, who we haven’t seen yet, comes into frame with a huge curved sword and he’s handling it like a pro. He’s backed up by the salesmen who also has a giant sword, and both seem ready to hit the robber.

Now, the man breaking in sees this obviously panics and takes a tumble out of the window that would make a silent film star jealous. Time to regroup, he must be thinking on the outside, we can do this, at least there were only two people with swords.

NOPE! WRONG AGAIN! As the nice salesmen doing shuffle steps makes his way to the window he slips and falls backwards. But don’t fret because ENTER A THIRD MAN WITH GIANT GODDAMN SWORD as reinforcement.

Again, many questions. Where are they getting all the swords? Is this also a sword store?

This is when shit gets real though, as Blue 1 fell from the window his friend in dark street clothes steps in an brandishes a gun at these men. You think that a man with a pistol entering the store would be it, right? This would be the end of the sword men's journey. Well, you would be wrong.

The man continues his crawl through the window and, as one of the defenders would later tell the CBC, his gun jammed. So, seeing this, the first man who entered with a sword—the primary defender—reaches at the gun and rears back for a giant goddamn strike with the sword. This threatening action is enough to get the man (who has a fucking gun, remember) to turn tail and flee. It’s a good thing he does too because our hero follows through with his swing and clangs his sword off the window sill.

As the would-be heisters leave our primary defender brandishes the sword again, this one as a threat and a victory salute.

Smash cut to the exterior footage.

The group chased away by the men with the swords stand around the corner for a time for just a little too long, longer than you think that a group who, I needn’t remind you, just attempted to rob a jewelry store but was chased away by men with swords. The hold up seems to be one guy who, like a Scorsese character, just can’t let go of the job. You can just hear the one guy pleading with Frank, our main robber, to just leave—”it’s botched, man, it’s botched.” Finally, they load up the Durango and leave.

Now, you would think that this broken window and attempted robbery would shake up the men at Ashok Jewellers but it didn’t really seem to phase them. They remained open and the wonderful lunatics actually said, to the CBC, “it was good luck for us.”

Apparently, this wasn’t even the only heist blocked by sword-wielding owners on this very block this summer. In July an owner just 100 metres away chased away would be robbers with a sword after they rammed a car into his storefront multiple times. Police are searching for four men in connection to this latest attempt and multiple units are investigating. In response to these absolute maniacs defending their stores with swords, police are, you know, recommending you don’t do that.

But, hey, you can’t really argue with the results, can you?

Sign up for the VICE Canada Newsletter to get the best of VICE Canada delivered to your inbox.

Yet Another Plunge in Crude: Down 7 Straight Weeks and Negative from Year Ago