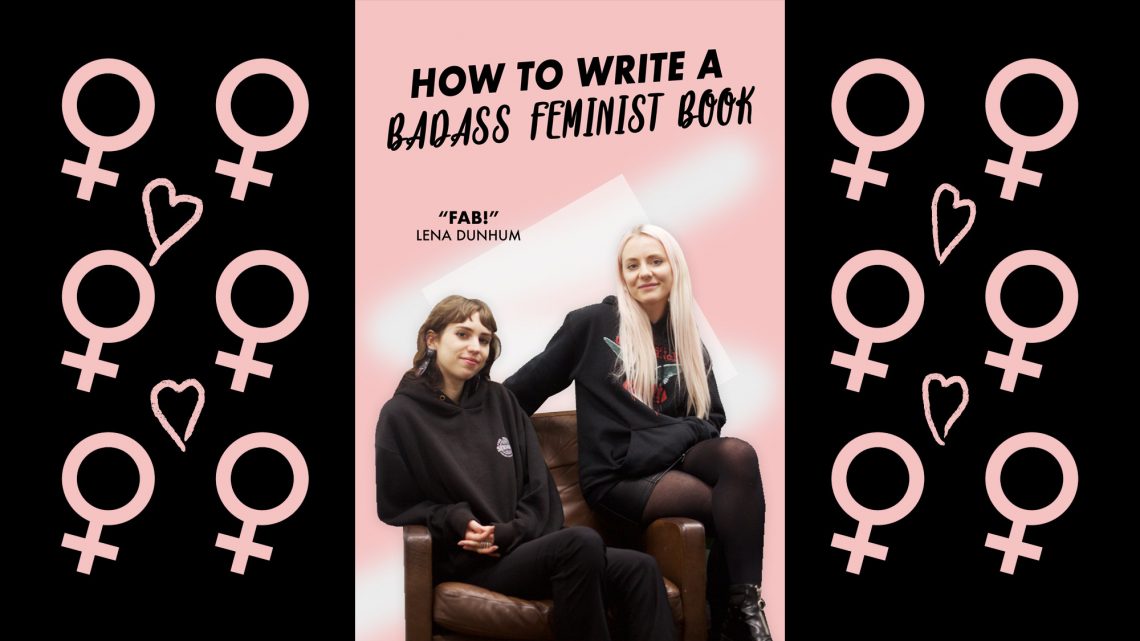 How to Write a Best-Selling Feminist Book

As two powerful writers who have both worked at VICE, we've each naturally been offered countless book deals. For most in-the-know writers, it will come as no surprise that they were largely self-funded books – something that we, as #groundup feminists, welcomed with open arms.

However, at 22, we were in no position to publish anything of real merit, not having cut our teeth on the grindstone of London media for long enough to have anything valuable to say. How times have changed. At 23, fresh from a work hiatus, we bounced back with a groundbreaking book idea that we hope will teach women across the UK: 1) what feminism is; 2) that it's OK to be a feminist; and 3) why we need to smash the patriarchy (with a pair of baby pink stilettos).

We're absolutely delighted to announce the release of our collection of essays written by other people, entitled The F Agenda: How To Be a Feminist & Other Stories. We’ve curated snippets from all the inspiring millennial women and femmes we've met on our journey, resulting in a kind of badass bible of girl bosses for girl bosses. This manual will show ladies everywhere it's more than alright to be loud, quiet, fragile, problematic and woke… and just a little bit messy.

There are so many of these fantastic pop-feminist books out there now – the marketplace is absolutely booming! – what better time to release our own unique offering. 2018 is the year to cut through the bulls*** and drag first, second, third, fourth, and fifth-wave feminism kicking and screaming and swearing (hear us roar!) into the modern age.

Never ones to pull up the ladder behind us, we see it as our unspoken responsibility as white women to bust some myths, carry the torch and help diversify the publishing industry. Are you a creative with a humanities degree and 8k+ followers on Twitter? Do you embrace the F-word? Do you have existing relationships with fashion and lifestyle brands? Would you write an essay for our book for free? It's time for you to join the revolution. Read on for our verified guide on how to publish a feminist best-seller. Fluffy pencils at the ready, grrls.

CHAPTER ONE – YOUR BIG IDEA

We've always been told that an original concept is everything. That's the patriarchy speaking. Don't worry about having an idea that's too radical – we can't all be the next Simone de Beauvoir (and she was hardly brand friendly). Don't be intimidated by the scale of the task, either. Remember, the industry people calling the shots are women, just like you. Only older and whiter. Top insider tip: it is standard that once a proposal has been snapped up, every publishing house commissions an identical feminist tome. So look at what's already out there and get that thinking beret on.

A great way to get inspired is googling "general statistics about women". Warning! This is likely to make you seriously angry, but getting angry is the first step towards having an opinion, so stick with it. For example, did you know that loads of women in developing countries aren't even allowed to work full time? Doesn't that just make you seethe? Fab!

Now you've lit a fire in your belly, we recommend you become the founder of a movement (or, as they're called now, a hashtag). Once you've harnessed some interest from the couple-thousand followers you previously accrued thanks to a Kooples campaign and a viral tweet about being hungover at work (that's right, men – women drink too), you’re primed for the publishing hounds.

Start a podcast either before, during or after the book. Or forget the book and do the podcast instead. Apparently Will Self said the iTunes chart is the new Booker prize on a panel last week.

If you're struggling, here are a few ideas we left on the cutting room floor to start you off:

Feminists As…
An illustrated series (can you hear those dollar signs, ladies?). Feminists imagined as babies (check that's not been done), feminists as ex-boyfriends, feminists as your old school teachers, feminists as footballers. Make sure to include misunderstood queens like Margaret Thatcher and to show you're rewriting herstory.

The Womanboss Theory
This girlboss is all grown up. Learn how to monetise your hobbies/whatever brings you joy, exhaust yourself in the freelance market and build your career around the fact you've based your entire self-worth on work achievements since AS Levels.

Witches Vs. The Patriarchy
Harness the power of crystals to cast feminist spells to dispel misogynistic ghouls (your boss, amirite!) and call in a new job in the creative industries, a hot man and an even hotter bank account [In Collaboration With Goop].

War, Drones and my Wardrobe
How to purchase a unique look to emphasise your everyday radical activism.

On My Own
Why owning a home on your own is the daring new face of emancipated femininity.

Spot Of Bother: A Memoir
How my struggle with acne allowed me to develop a sensitive understanding of race relations.

Penned to Paper
A guide for a generation of disadvantaged young women on how to use cute pencil cases and personalised stationery to slay in the workplace.

Feminists F***!!! : Naughty Stories For Naughty Modern Women
"I'm on the tube and feel something brush against my lower back. I turn and see an attractive man, who I believe to have perpetrated sexual harassment – in the post #MeToo era, no less. But he smiles and passes me my copy of Caitlin Moran’s How To Be Famous: A Novel. He compliments my Monki statement necklace and asks me for a gin and slimline tonic…"

Concept locked and loaded. Now you need a sisterhood to back it. Leveraging a young, hungry online feminist community around your project is going to be crucial to success. Luckily, thanks to the adult playground that social media has bestowed upon us (BTW, we really miss school!! We were such a pair of boffins – Hermione much??) locking down a collective of outspoken, influential thought-leaders has never been easier. Make sure that throughout your successful career you always lend a hand to other ball-busting babes with growing social media footprints. All those good vibes will ensure that once your turn in the limelight rolls around, they’re happy to repay with RTs.

Collaboration is also key when it comes to writing the book, though we’ve been legally advised against using the word "writing" in relation to this project. Modern feminist theory is all about crowdsourcing, which is feminist and empowering because it's a word used in tech, and tech is an overwhelmingly male industry (blech!). We decided to band together and "create" this "book" as a duo, commissioning even more women (share the love!) to provide the "essays", which are the longer pieces of text that come after the contents page. Women love to creatively collaborate. Why do you think we always go to the toilet together?

If there's anything a millennial woman loves, it's a book that's actually a long list, bought from the gift section of Urban Outfitters. You probably don’t want to bother with too many words. Phrases, idioms, illustrations! These are your friends. 40,000 words, abso-max. Do you want a cute pocket book that fits in your handbag or no?

Colors say what words don’t, or would if we used more of them. We’re not supposed to like pink, because we’re supposed to like pink. But maybe we can like pink now and it’s subversive? Or is it anti-subversive? Is it woke or post-woke to like pink? See, the patriarchy STILL has us so confused. Try millennial yellow or peach. Women love an illustration, too – they’re fun and warm and remind us of our childhoods. They also provide another opportunity for – you guessed it – a feminist collab.

Empowered women love to buy, buy, buy – badass tees, badass stuff with slogans, little trinkets and also little trinkets with badass slogans. More than the book, your followers are hungry for the merch. How about "Wild Feminist" and "Mind your own uterus" and "Don't you wish your girlfriend was EMPOWERED like me" on shirts with your book's hashtag underneath, plastic iPhone cases that read: "Serious about changing the world. And shoes." and branded sanitary towels where 5 percent of the proceeds go to an End Period Poverty charity?

Fans should be hysterical over your weekly podcast that provides sage adulting advice from interviewees with inspiring trajectories. Women who’ve gone from total obscurity growing up in north London with theatre director parents to the cutthroat entertainment industries they’ve arrived in via raw talent and girl graft.

Get your gal-pals at Stylist and ES Magazine to write up interviews with you. Thank them by hosting an exclusive "women in media" dinner celebrating a diverse roster of hard working full time columnists from every borough of London (zones 1 and 2). Polenta and cupcakes! Make a big deal about wine in the invite because feminists respond to the promise of wine as though they haven’t drunk a drop for a decade! Also: women love to be heard, so panels are the perfect safe space for that. Culminate in a sharing circle at The Library on St Martin’s Lane, sponsored by Baileys.

Voilà! You now have a supportive male-feminist fiancé with a culture or media career, a future spot as a newspaper supplement columnist talking about why certain consensual sex acts are not empowering for women, enough brand relationships to keep you in sponcon for a lifetime, and, of course, your feminist masterpiece. You – yes, you, girl – have changed undecided hearts and minds of people, who now think women should be equal and empowered, by becoming the next-best-face of feminism. Check out this groundbreaking She-E-O in the making.

The Netherlands’ Master Weed Growers Are Flocking to Canada