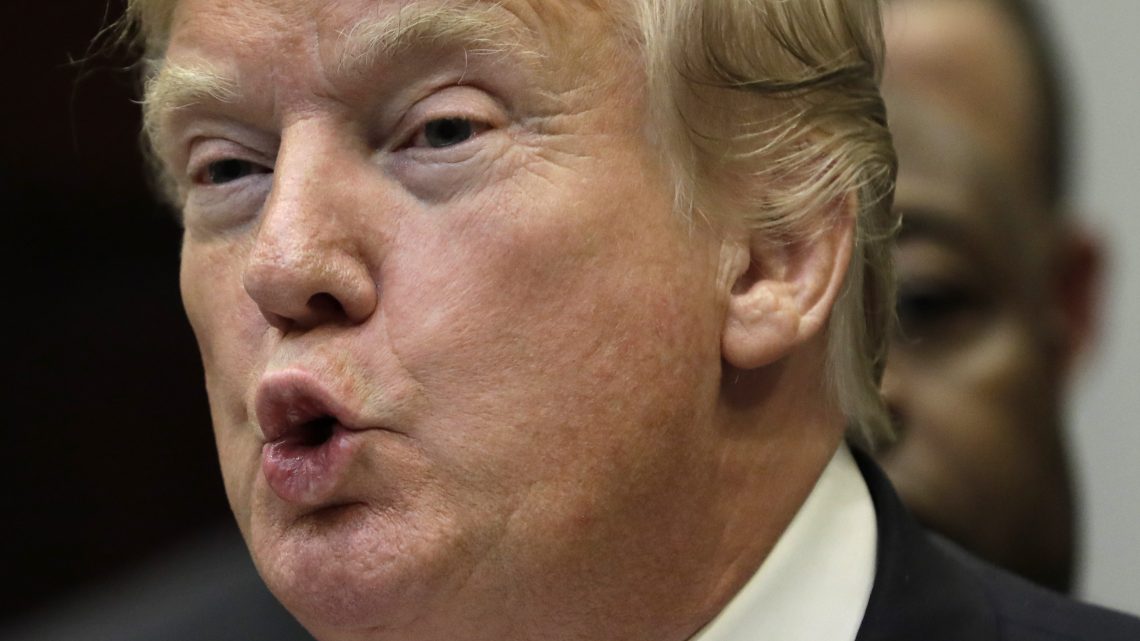 If you've been conscious between 2015 and today, chances are you're aware that Donald Trump, the president, has pretty unorthodox beliefs. I'm not talking about the blatant racism and overt corruption that has marked his administration—I'm talking about the straight-up weird parts of Trump's worldview. Like how he hates sharks because they are "disgusting creatures" and once said, according to Stormy Daniels, "I'll donate to just about anything, but the only shark charity I would donate to is one that promised to kill all the sharks."

Becoming the most powerful person in the world hasn't altered his deeply odd perceptions. In an interview on Wednesday, Trump claimed, “If you buy a box of cereal—you have a voter ID.” Trump's apparent unfamiliarity with buying groceries falls in line with the sad fact that the wealthy and famous are often out of touch with the world of us plebeians—Trump's good friend Tom Brady tried his first strawberry at the age of 40, Hillary Clinton hasn't driven a car since 1996, and multiple celebrities legitimately believe the earth is flat.

Still, despite our already incredibly low expectations for Trump, he is the president, and thinking about what he believes is a genuinely frightening exercise. So let's take a journey through the most fucked-up, dumb things the commander-in-chief of the world's most powerful military legit believes:

1. You need ID to buy cereal

In an interview with the Daily Caller, Trump harped on one of his favorite issues: voter fraud. “If you buy a box of cereal—you have a voter ID,” the president said. “They try to shame everybody by calling them racist, or calling them something, anything they can think of, when you say you want voter ID. But voter ID is a very important thing.”

A regular person who visits a grocery store on a weekly basis could tell you the thing about cereal is not true. But how would Trump know otherwise? He grew up rich, which makes you wonder whether he's ever visited a grocery store at all.

"He considers exercise misguided, arguing that a person, like a battery, is born with a finite amount of energy," the New Yorker reported in 2017. And a biography of the president asserts:

After college, after Trump mostly gave up his personal athletic interests, he came to view time spent playing sports as time wasted. Trump believed the human body was like a battery, with a finite amount of energy, which exercise only depleted.

Do I even have to debunk this?

Despite his promises of healthcare for everyone throughout his campaign, Trump has only made insurance more expensive for the average person during his time in office. Maybe that's because he never understood how much healthcare costs the average American—in a 2017 New York Times interview, the president said, "You’re 21 years old, you start working and you’re paying $12 a year for insurance, and by the time you’re 70, you get a nice plan." Actually, insurance costs young people at least $100 a month.

4. Asbestos could have saved the World Trade Center

I shit you not, in 2012, Trump tweeted, “If we didn't remove incredibly powerful fire retardant asbestos & replace it with junk that doesn’t work, the World Trade Center would never have burned down.”

5. And the mob is the reason we think asbestos is bad

Per Politico, Trump asserts the following in his book, The Art of the Comeback:

I believe that the movement against asbestos was led by the mob, because it was often mob-related companies that would do the asbestos removal. Great pressure was put on politicians, and as usual, the politicians relented.

Trump has often bragged about only sleeping four hours a night, and honestly, it shows. “Don’t sleep any more than you have to,” he said in his 2004 book, Think Like a Billionaire. "I usually sleep about four hours per night... and it gives me a competitive edge. I have friends who are successful who sleep ten hours a night, and I ask them, 'How can you compete against people like me if I only sleep four hours?' It can rarely be done."

In Think Like a Billionaire, Trump also warns against the evils of technology, foreshadowing one of his main 2016 platforms, "but her emails."

"Don't depend on technology," Trump advises. "If you have something important to say, look the person in the eye and say it. And if you can't get there, pick up the phone and make sure they hear the sincerity in your voice. E-mail is for wimps."

Next time Trump tweets, I hope he thinks about that.

In a 2015 GOP debate, Trump said, “I am totally in favor of vaccines," but nevertheless asserted the following misinformation about them:

"You take this little beautiful baby, and you pump—I mean, it looks just like it is meant for a horse, not for a child, and we had so many instances, people that work for me, just the other day, 2 years old, beautiful child went to have the vaccine and came back and a week later got a tremendous fever, got very, very sick, now is autistic."

10. Wind power is bad because it kills birds

As he's established, Trump is not a fan of environmentally friendly energy. Just look at his musings on wind turbines:

Unlike some of Trump's other beliefs, this is at least a myth in wide circulation, but it's still a myth—bird deaths due to turbines are relatively rare.

A notorious germaphobe, Trump has said "the simple act of shaking hands" is "barbaric" and a "curse of American society."

Calling others dogs is one of Trump's go-to insults, and according to the Washington Post, it's because he "has an aversion to dogs and other pets," and thus "considers canine comparisons to be among his most devastating put-downs."

In a July, Trump cited an imaginary poll that found he was a more popular Republican president than Abraham Lincoln. “You know, a poll just came out that I am the most popular person in the history of the Republican Party—92 per cent. Beating Lincoln. I beat our Honest Abe," Trump said.

As an exhaustive Task & Purpose rundown of Trump's comments showed, the president lavished the expensive stealth plane with praise to the point where he implied that the fighter isn't just hidden on radar but literally impossible to see. "It wins every time because the enemy cannot see it. Even if it’s right next to it, it can’t see it," Trump said last year. Say what you will about the world he lives in, it's not a boring place.

What Will Amazon’s HQ2 Mean for Transit in Queens?