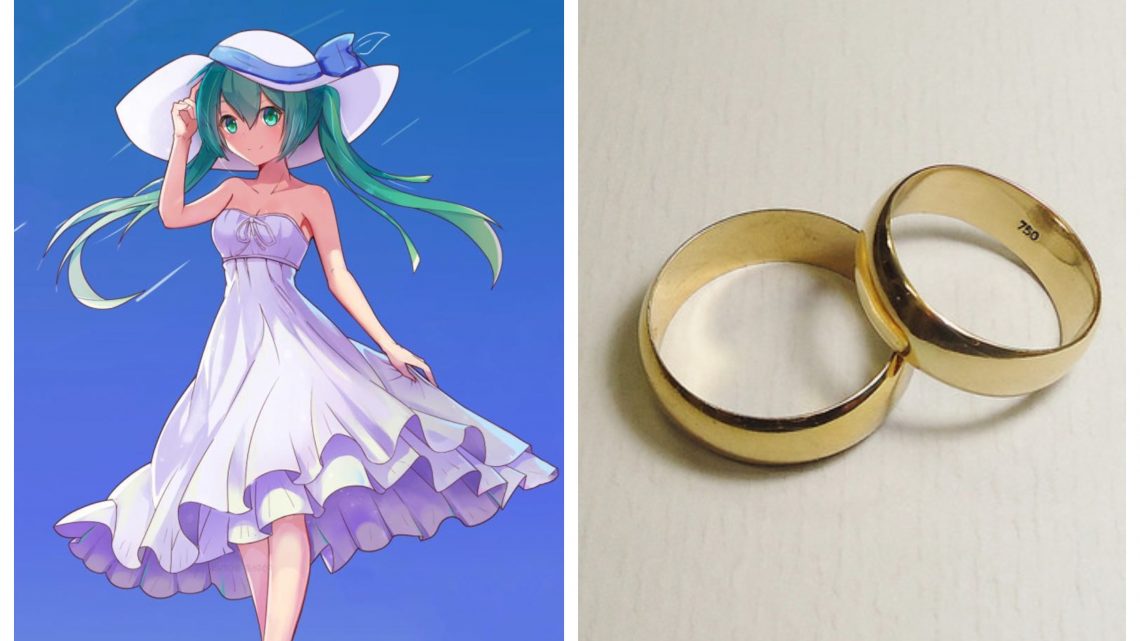 When a man marries a fucking hologram, it's sure to make headlines worldwide. That's exactly what happened this week, when a man named Akihiko Kondo "married" a desktop hologram of an anime character called "Hatsune Miku." Miku isn't real. She's a cartoon character who's 16 years old and has hair the color of cotton candy. She's also a pretty big pop star in her own right who sells out concerts in Japan, New York, and Los Angeles, despite the fact that she doesn't really exist. Are you still with me? OK, good.

So how does a flesh and blood man fall in love with a hologram? It has a lot to do with these desktop holograms made by Gatebox, a company making a killing off the sexual predilections of lonely people. These glass boxes project a holographic version of popular anime characters that you can actually interact with—albeit it in a far more limited way than you could talk to a real-life woman.

Watch: This Holographic Anime Character Could Be Your Next Girlfriend (HBO)

Now, back to the "wedding." Kondo, told AFP that he wasn't in love with Miku the pop star, per se. No, it was the Miku who lives on his desk at home he was really in love with.

“I’m in love with the whole concept of Hatsune Miku but I got married to the Miku of my house,” he told AFP in a weird bit of logical wordplay that only makes sense in 2018. There is no one real Miku here, only a concept and a bunch of private Mikus you can buy for $2,800.

Now, his Miku is more than just a hologram that talks. Aside from telling him goodbye when he heads off to work each morning, he can also send Miku a message from his cell phone when he's on his way home and she'll turn the lights on. She even tells him not to stay up too late and, presumably, can wake him up as well, which is nice and all until you realize that everything Miku does for her new "husband" is the same stuff an Amazon Echo could do. It makes you wonder if Amazon would get a bunch of marriage proposals if Alexa looked like a pre-pubescent cartoon with chipmunk eyes instead of a futuristic coffee can.

Gatebox, in a sign that it knows its audience way too well, offers customers a "marriage certificate" for their Miku. It calls these unions "cross-dimension" marriages and has sent out more than 3,700 of them to date, according to the report by AFP.

But what about the stuff a hologram can't do, like sleep in bed with you or take a trip to the alter? Well, Kondo told AFP that he sleeps with a waifu dakimakura, or a body pillow of his girlfriend Miku, each night. And on their wedding day, he carried a tiny stuffed version of Miku, which was about the size of a puppy, with him to the alter.

An audience of 40 people or so attended his $17,500 wedding ceremony. But, sadly, Kondo's mom, as well as the rest of his family, declined the invitation.

“For Mother, it wasn’t something to celebrate,” Kondo told AFP.

Yeah, OK, so all of this is definitely weird. Just like it was weird nine years ago when a different Japanese man married a character from a popular dating game that lived in his Nintendo DS. Or when a man in South Korea married a body pillow with an image of Fate Testarossa, an anime "magical girl," on it in an actual ceremony.

But it's also indicative of an actual problem in Japan—a demographic shift that some economists are now calling a "time bomb." Here's the short of it: Japan, as a nation, is getting older. Way older than its neighbors. The average age in Japan is 46.1 years old. In China, it's 36.7. In Indonesia, it's 29.2. The Philippines is even younger at 22.4.

This aging-up of Japan comes with consequences. There are more people leaving the workforce because of their old age than are being born to replace them. This is why economists are calling it a time bomb, the idea being that, eventually, this will have a very real and dramatic effect on the national economy.

There's now an epidemic of old people dying alone in sad apartment complexes completely devoid of young people. And there's so few new workers to take care of these elderly people that a recent survey found that 80 percent of people in Japan feel pretty positive about leaving the care of the aging up to robots. (Never mind that, to bring this full circle, there's actually an anime about this very thing going way wrong.)

So why is all of this happening—a declining birth rate. Japan's birth rate is 1.41, way below the rate of 2.2 that most experts believe is needed to keep a country's population healthy and economically viable. And it's not because Japanese people don't want to have sex, despite what some stories may tell you. It's because most of them can't afford to have a child.

Japan has one of the most-overworked workforces in the world, so much so that it's actually killing people. Add that with a serious glass ceiling issue for women and you have a work culture that prioritizes staying childless for as long as humanly possible. Can you blame people for feeling a little lonely?

So when a man marries a hologram, maybe it's weird Japan. Or maybe it's just late capitalism.