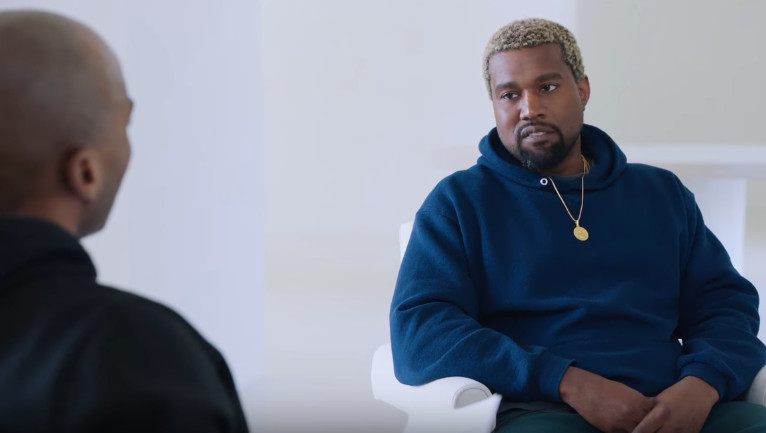 Every interaction has given me anxiety, from the random phone call, new employee handshake, knock on door, to the food delivery dude—everything. Today’s source of anxiety is an interview with Charlamagne tha God.

In my rational mind, he’s a host from one of the most popular radio stations in America, The Breakfast Club. He's a complete hip-hop/R&B aficionado and TV personality. That’s it. Nothing crazy or telling. No bit about that is a statement of danger. But in my heart, the beat is fast. The blood is pumping because he’s a stranger. That makes him unpredictable, and my anxiety doesn’t enjoy unpredictability.

In moments like this—when every minute leading up to an interaction sends my heart racing, creating Jello’d nerves—I'm extra appreciative to be talking about the source of my fear, which is my anxiety.

“My whole life in general man, honestly... I've just really been scared for a lack of a better term,” Charlamagne admits during a phone call. “I've always been this way.”

And I feel him for obvious reasons. The New York Times best-selling author, interviewer, and radio host has been openly talking about anxiety to the masses, and now he’s doing it through his latest offering, Shook One: Anxiety Playing Tricks on Me, a blueprint for breaking away from anxieties and fears. Over the course of a life that involved a whirlwind of highs and lows, Charlamagne has ample reasons to be anxiety-ridden, and I took the opportunity to talk to him about it all.

VICE: I appreciate you taking on this topic, especially as someone personally who deals with his own issues. I mean, what’s the response been like?
Charlamagne tha God: The response has been good man. Second books are always interesting but it's sparking the conversation that I wanted to spark. It's creating the energy and ecosystem that I wanted to create, and all I’ve ever wanted to create was conversation. I'm a big believer in evolution, growth, and in being the best you that you can be, and I feel like the first step to doing that is getting mentally healthy. Everything starts with a thought. Your thoughts become things and anything that your mind can conceive, you can achieve. A lot of times when you have a lot of these distractions going on in your brain, whether it's dealing with anxiety which leads to insecurities, low-esteem, doubt, depression, and fear, it takes sitting down and seeking professional help through various means of therapy, spiritual advisers, meditation or all three. It’s when you can organize all of that clutter in your brain.

I imagine it like you've got a real junky closet. And when you head in there with all the boxes, you begin to pack up all of the stuff you don't need while organizing the clutter you want to keep. By then, you’ve got room for new material. Mental health in that sense is wealth man, and this book is starting that conversation... I'm not even going to say starting it actually, it’s loudening the conversation.

You were one of the few who took a sympathetic approach to Kanye West’s antics as well. And it leads me to ask if you believe mental health is treated unfairly across the board and why.
The problem is that we just don't believe that celebrities can go through anything. And we don't believe celebrities when they say that they do. We believe that they’re always being disingenuous and we don't look see them as human beings. So a celebrity will scream at the top of their lungs, about having a mental illness, and we'll dismiss it because it’s like, whatever, you're just trying to sell records, sneakers, or you're making excuses because you support Donald Trump. Kanye West isn't even the first person I've done that to if people really pay attention. I used to give Azealia Banks Donkey of the Day a lot until I actually started having actual conversations with her, and now I like her. She’s an intelligent and very articulate woman, and she's put me onto some things that have happened in her life that let me know that she's got a few things that she's got to work on too. Once you know that about a person, you tend to look at people different like I do with Kayne. And you are more empathetic to whatever it is that they're going through.

But I have to say that I definitely think we're hypocrites when it come to the whole mental health aspect as it relates to celebrities because we really, truly, honestly feel like celebrities aren’t allowed to go through anything just because of their status.

There’s a distinction you make about viewing fear with the right lens. One of the better examples in your book is you were scared over the allegations of sexual assault tied to your name. Tell me about your mindset at the time.
It didn't scare me so to speak. It was more so like, OK, you can't escape your past. That's just the truth of the matter. And it isn’t something that I've ever hid. None of that stuff was a secret. I spoke about my criminal sexual misconduct charge with a minor from 2001. And I always spoke about that. Hell, I wrote about that in my book. That was nothing for me to hide. Literally the next day, I fully cooperated with authorities, provided blood samples, and did everything I was supposed to do. And if anyone really looked into at that case, they’d see that something didn’t add up there. Thinking back, the only thing that I was tripping off of was the old audio clips from 2015 that surfaced from my podcast, which I always found strange. When I made those rape comments three years ago in regards to my wife, people understood the context that it was in. I was having some unrefined discussions about rape culture, and I believed to be doing a good thing because I wanted to school young men on how not to move. And inform everyone in how a lot of things we've done back in the day were considered the norm, and how now, it would be considered sketchy. So don't even put yourself in those situations. When that happened and everybody blew it out of context, I was like damn, it was never about the incidents, it was an attack. If I'm being totally honest, it’s one of those things that has always given me anxiety.

I'm not mad at that though. I'm not mad at any of it because all it does is make me just continue to grow, evolve, and help me to become a better communicator. And I'd be lying to you if I told you that I had any of those conversations on my podcast correctly. I can look back and see how some people were able to take that totally out of context.

What was the most challenging aspect about writing this book and putting it all out there?
The biggest challenge for me was actually trying to transcribe what my therapist was informing me of. And then to realize that it wasn’t my place. My therapist was telling me things for me alone and for my benefit. So that's when I reached out to a separate expert in Dr. Ish Major to be my actual expert in speaking on the experiences that I was attempting to explain. I thank my therapist separately for giving me the energy and proper knowledge to explain what I was feeling and going through. And that's the beauty of therapy, it helps you to be more vulnerable. I've never had a problem being transparent. I mean, you just asked me about my sexual assault allegations, and I'm like, yo, if you really sit back and look at it, I don't have any sexual assault allegations. The only thing I’ve got is the things that I've told y'all. This is the stuff that Charlamagne told you. There’s no women lying saying Charlamagne did this or that to me, I told you guys about a story with my wife. I told you about a story with my home girl who she herself wrote a deposition saying, are you crazy? He didn't rape me. We were kids. These are the stories that I shared with people. It's I who told you all of this. So again, I've never had a problem with being transparent, it's just that I've never been vulnerable. The difference between being vulnerable and transparent is that vulnerability comes in telling folks how you felt in a situation as opposed to just telling you about it. That was the hardest aspect. And I would never have been able to write this book without going to therapy. Because I didn't have a real understanding of these feelings, issues or why I felt the way I felt about certain things.

What are you hoping most that people get out of Shook One: Anxiety Playing Tricks On Me?
That you truly can't heal what you don't reveal. And I want them to know that everything is mental, and that everything starts with a thought. In order for us to be the best that we can possibly be, it has to come from a cerebral aspect. I'm a stern believer in the law of attraction and your thoughts becoming things, and I think that a lot of times we don't think with clarity because we've got so much baggage. It's okay to get help. That's all I want people to know. That it's OK. You can admit that something is wrong, and that you don't have things figured out. I know we live in this social media, Google everything era and it's so easy to sound so smart, and easy to say the perfect thing on social media all the time. And we got all these amen corners, and we're playing to the crowds, so as long as these crowds are giving you these ooo's and these aaah's, you love it, and you embrace it. But that's wack. In order to truly lead the orchestra, you've got to turn your back on the crowd. That's what I'm doing with this book. I'm turning my back on the crowd and saying look, ya'll can continue to front like y'all got it all together, I know that I don't have it all together, and I'm not going to let y'all make me go crazy.

The Smiths Reinvented Celebrity Social Media with a Purpose