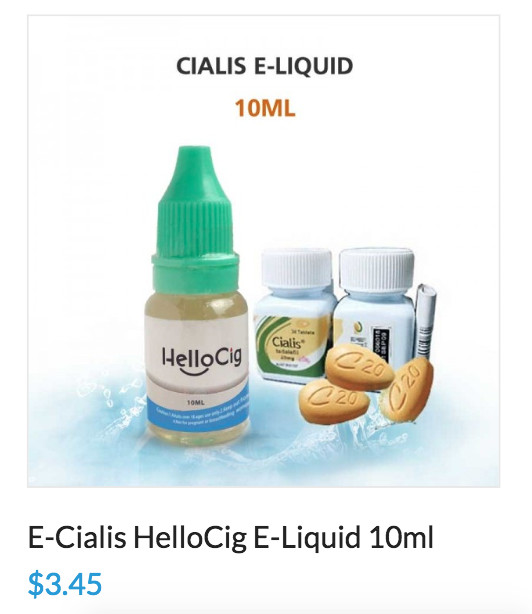 FDA: No, You Can’t Sell Vape Juice Spiked with Viagra

The FDA has been cracking down on e-cig companies lately, mostly focusing on the flavors and marketing that have fueled what it's called an "epidemic" of teen vaping—but last week, the federal agency busted a Chinese-based company for marketing to a bit more of a mature clientele in the States.

According to the FDA, a brand called HelloCig Electronic Technology Co., Ltd was cited for "unapproved new drug violations" for putting erectile dysfunction meds into its vape juice and selling the stuff as "E-Cialis" and "E-Rimonabant." Not only did the agency find traces of the active ingredients in both Viagra and Cialis in those products, but it was marketing the mixtures online as "healthcare" flavors using photos of the vape juice next to the related prescription pills.

"An advertisement for 'E-Cialis HelloCig E-Liquid' on Twitter and Tumblr state 'Cialis' with an image of the product and a partially undressed couple embracing. The caption states, “WOOOOW, Have you tried our E-Cialis? It is amazing LOL Check out: http://www.hellocig.com/e-cialis-hellocig-e-liquid-250ml"

Along with the bootleg ED meds, the FDA tested a flavor that wound up showing traces of an outlawed anti-obesity medication linked to causing psychiatric health disorders in its healthcare line. HelloCig has since scrubbed all traces of the spiked mixtures from its website, but the so-called "healthy" product line is still up online, save for the flavors the FDA called out in its warning.

As FDA Commissioner Scott Gottlieb explained in a statement, the agency hasn't approved any kind of e-cigarette juice laced with prescription medication—and regardless of whether or not it's legal, inhaling Viagra through a vape rig probably isn't a great idea, medically speaking.

"Vaping active drug ingredients is an ineffective route of delivery and can be dangerous," Gottlieb said. "There are no e-liquids that contain prescription drugs that have been proven safe or effective through this route of administration."

Despite the fact that it was flagrantly violating FDA policy, HelloCig lied about being cleared by the agency on its site, where it advertised its vape juice as being an "FDA approved product with FDA," according to the warning letter. Now, the company has about two weeks to stop selling their weird, ED e-liquid and address a handful of other "violations"—or risk facing fines, seizure, or even criminal prosecution, according to the FDA's press release.

It's hard to imagine who the hell would even want to vape Viagra; folks who are in the market for ED medication and the JUUL crowd don't really seem like they'd intersect. But people have, in fact, sucked down E-Cialis, and if you're curious, one reviewer claims it tastes like "a cross between cheap vodka and Listerine."

What You Should Know About the Mysterious Trump ‘Elevator Tape’