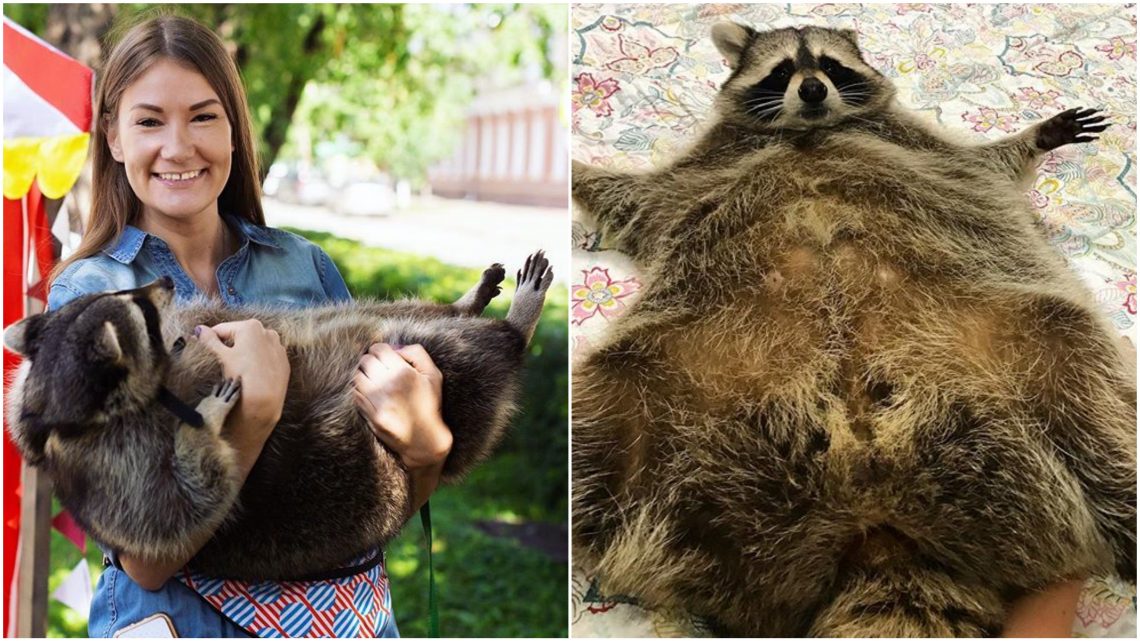 In a video that went viral a month ago, a woman lifts up a mattress and uncovers an adorable raccoon far too tubby to scale a building or ride a garbage truck. (If he got super stoned, he would probably wind up stuck in a gutter.) He lays on his back covered in what looks like popcorn. The overstuffed trash panda is being kept as a pet, and its owner shames the beast, asking him in Russian why he has been so naughty.

That raccoon is Tema, a two-year-old meaty mammal who has over 130k followers on Instagram, no doubt due in part to his impressive girth. He’s huge, thanks to a diet of premium quality dry dog food, seafood, veggies, fruits, and nuts. He lives with a dog, two humans, and a cat with whom he also shares a litter box. His human mom, the one expressing her disappointment in the viral vid, is Lena Troskina, who got him as a baby from her husband, who she says was a manager at a zoo at the time. “When I saw him at first he was so tiny, my heart melted. It was truly love from the first sight,” she wrote VICE in an email.

Troskina professes her love for Tema despite his destructive and devious nature. She tells VICE she's gone to great lengths to keep him home and happy. When he was a baby he required bottle feeding every two to three hours each day, followed by a belly massage to aid his digestion. Troskina says she can’t watch TV shows and movies because Tema tries to tear apart her laptop. If she tries to clean the house, Tema spills water everywhere. When she eats, Tema tries to steal her food. “Despite all these things," Troskina says, "I try to spend most of my time with Tema."

When Tema got older and started packing on pounds, Troskina says she and her husband had to remodel the whole house to keep their possessions safe. “Raccoons are very intelligent. They know how to open all the doors. They can access the cupboards, wardrobes, and drawers. They know how to open the fridge and switch on the tabs on the oven. Tema has destroyed the floor in the kitchen, torn apart wallpaper, curtains, and broken pipes in the bathroom. So, for now, we have locks on all the doors,” she said. In fact, what appears at first glance to be popcorn in that first Tema video is actually stuffing ripped from the mattress. “You gotta be ready that your house will no longer be yours,” Troskina added about the waking nightmare she's signed up for but somehow loves.

Like opossums, raccoons shouldn't be kept as pets. “People buy them as adorable, cuddly babies and within eight months they turn into bite-y destructive monsters. So people do what you would expect…and let them go,” says Dr. Suzanne MacDonald, a behavioral psychologist documenting raccoon behavior for the City of Toronto—which has been dubbed "the raccoon capital of the world." Troskina and a handful ofother Insta-famous raccoons seem to be the exception, but places like Germany and South Korea have been overrun with ring-tailed beasts, where they've become experts at coexisting with humanity, but terrorize the rest of the ecosystem, and spreading disease. Outside of North America, they’re an invasive species.

Still, people keep trying to domesticate them. MacDonald says she has been interviewed about trendy South Korean raccoon cafes on multiple occasions. “I continually find myself saying, ‘Wow, this is such a bad idea,’ to South Koreans, and I would say the same to the Russians,” she said.

In the face of all the evidence, Troskina remains unabashedly devoted to her pet. She's turned that devotion into a market for t-shirts, mugs , and calendars, plus an audience for ads about for dog treats, toys, and aspiring celebrity pets. Around 40 to 80k people regularly tune into her videos.

“At first, it was quite difficult for me to accept Tema being so naughty,” she says. “I cried coz [sic] I couldn't do anything about it, especially when I came home and saw the curtains were torn apart and the pipe in the bathroom was broken. But now our flat is adapted for the raccoon. We have short curtains and all the doors are locked. Now I'm really OK with everything that Tema does. I really love him and can't imagine my life without him.”

This Guy Made a 200-Pound Bomb to Promote His Bizarre Ideology, Feds Say