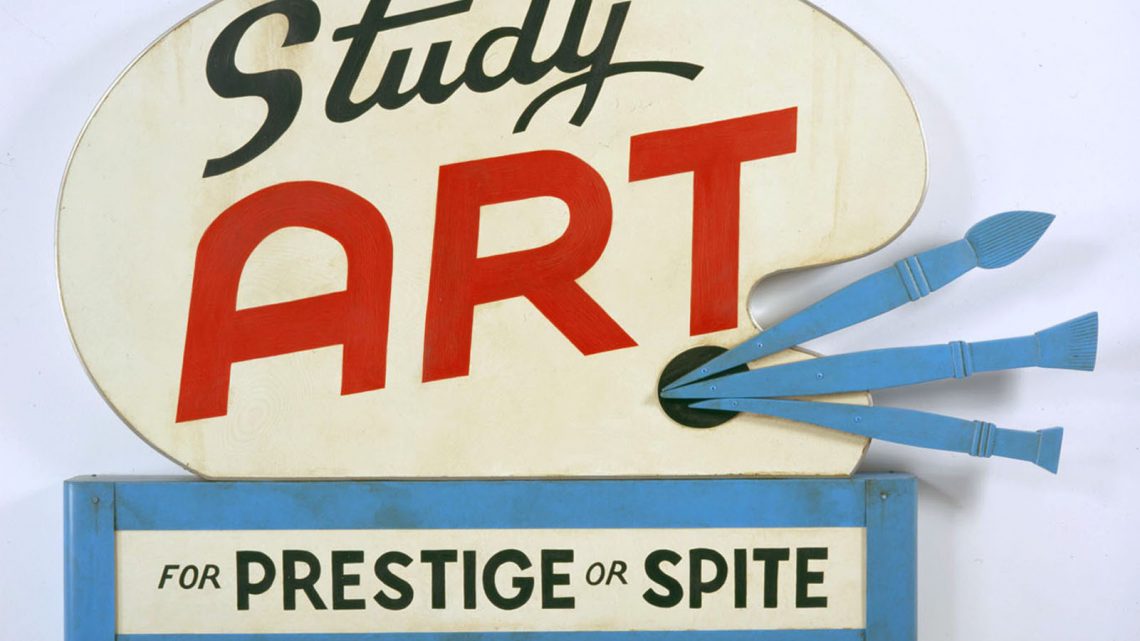 John Waters Has Some Crude Advice for Aspiring Artists

John Waters is much more than just a cult filmmaker. The “Pope of Trash” is also an artist. Since 1992, in fact, he has been making sculptures, photos, and paintings with the same trademark sass that infuses his films, shedding a sardonic light on show business.

Waters opened a retrospective of his artwork at the Baltimore Museum of Art on October 7 titled Indecent Exposure, which features 25 years of his artwork. Featuring everything but his films, the exhibition offers a punk twist on contemporary art, as Waters is a master at poking fun at the more-serious-than-thou art world with slogan-driven snarky pieces that read “Contemporary art hates you” and “Make art for hobby or profit.”

But Waters is more than just a naysayer; he’s a pop culture connoisseur—he put Michael Jackson’s head on a sculpture of a baby, spoofs the National Enquirer for the #MeToo era, and proffers photos of would-be film credits with casts too good to be true. His humor-driven artwork has been hugely influential to artists like Mike Kelley and David LaChapelle, as well as fashion designers like Comme des Garçons’ Rei Kawakubo and John Galliano. Waters, who will release his forthcoming self-help book Mr. Know It All next year, spoke with VICE from his home in Baltimore about bad taste, selling out, eating shit, and the problem with being politically correct.

VICE: You started making art in 1992. Is it hard to shift the focus away from your filmmaking?
John Waters: I go to great lengths to do that. Colin de Land, the great art dealer, once said, “Do you ever do any artwork?” and I said, “Yeah, I have these little pictures.” He said, “What do you mean, these little pictures?” By the time he looked at them, I had an entire first show.

You kept going with it?
Yeah, I kept going with it and got into it completely. It’s just a new way for me to tell stories. I’m asking you to watch a movie in a different way. Don’t pay attention to the plot, pay attention to the pictures on the wall of the apartment, which have nothing to do with the plot. Look at movies almost like a detective or a snipe hunter. Or a burglar. Noticing things the director doesn’t care if you notice. The original director.

You might be too entertaining for the art world, which takes itself very seriously. Do you agree?
I make fun of it, but I always love what I make fun of. I speak that language, I collect contemporary art. A lot of the art I have bought, I did hate it first. I like things that can surprise me. I have one piece that mocks getting close to art. If you get too close to it, it squirts you with water. It’s like candid camera!

How so?
There is a piece in the show called Art Market Research, which is a parody of focus groups for the art market, which we don’t have yet. It’s something you do in the film business. It’s exactly the kind of focus group that is known in the business as the “fuck us group,” but could that ever happen in the art world? Imagine saying to Nan Goldin, “Can it be more pop?” Or “Does it have to be junkies?” Or to Richard Serra, “It’s too heavy for my floor.” It’s a parody of that. But who knows? It could one day be true. I have an image of Lassie with a facelift in the show. Would pets get facelifts? One day, I bet they do.

You have a 2006 artwork which says, “Ed Sullivan Raped Me!” Does it have different significance today?
That was a real headline in the National Enquirer. I thought, God, it was so hideous. I isolated the headline for the artwork, but really, who would ever put that over their couch? But now, with #MeToo, it probably was true. It probably wasn’t a crazy, tabloid, made-up story. That’s how things can change so much over the years.

With your own legacy, do you think you will make art history?
I never say that. When people ask if I’m an artist, I say, “I hate it when people say, ‘I’m an artist.’” Is it for me to decide or history to decide? I never say, “I’m an artist.” That’s up to others to decide, really.

I hear you’re not a fan of social media?
What do you mean? First of all, I’m not on Twitter because why would I give away all my jokes? I have to make a living. What would I put in my spoken word shows? I wouldn’t have any material left. And secondly, I’m not interested in what you had for lunch, really. I’m on my computer all day; I work ten hours a day. I don’t have time to look at all that, to be honest.

What is your advice for artists today? As someone who has done everything.
My advice is to get on the nerves of the person you thought was the coolest in high school one year ahead of you. It’s to surprise them. It never works if you think, “How can I be an artist?” First of all, go to every gallery. Read art magazines. Participate in the world you want to enter. And figure out how it works. Then don’t show anyone anything until you have a real body of work. If you get accepted too early, it’s not good. Probably the work isn’t great. If you are immediately embraced, something is generally wrong.

How do you feel about that in relation to your art? You’ve been a filmmaker for over 50 years and made art for 25 years.
I always wanted people to appreciate my art and see it. I tell kids who say, “I don’t care if anyone sees my art,” [that they] won’t get far, because somebody has to [see it]! It’s not like we live in Europe where the government supports radical artists. They don’t do that here in the US. They try to stop them! People have to like it, so you have to figure out a way to weirdly be commercial, but at the same time never appear to be.

Do you feel like you’ve never sold out?
Oh, I always wanted to sell out! It’s just nobody wanted to buy me.

I don’t believe it!
Selling out? I wanted to have hits! I never made a movie I thought people wouldn’t come to see. When people didn’t, I was really surprised. I never knew why one did better than the other. They all were the same to me, really. I love to tell stories and the subject is always stuff I don’t understand, as I never really understand human behavior. That’s what interests me. If I focused on something I understood, I would lose interest really quickly.

You didn’t study art or film?
No, I didn’t have a good academic record. Schools never let me do anything, and I was too angry and nuts then. I learned how to do it on my own. I think you go to school when you don’t know what you want to be.

But you released a book giving advice called Make Trouble, which was based on a commencement speech you gave?
My new book is even worse. It’s called Mr. Know It All, and it’s my opinion of what you should do with your life in every aspect.

Oh my god, it’s like you’re Dale Carnegie. It’s a self-help book!
Yeah, I am. But the irony is that it was pretty amazing to do a commencement speech, considering I never graduated from anywhere really. They gave me an honorary award, which is lovely, but I joked I was instantly demanding tenure. I was flattered by that, but there is irony.

Are you able to grasp the cultural influence you’ve had on Hollywood?
Well, I just came from John Waters Camp, an annual event, which was staggering. People came from Australia and Japan. It’s almost like a Star Wars convention, but they all come dressed as my film characters. Even one woman was dressed as the flames in the trailer of Pink Flamingos. I mean, it was pretty crazy. Mink Stole and Traci Lords were there. I did my whole spoken word show. The most surprising thing was a girl came up and asked if she could eat dog shit in front of me, and I said, “Well, I don’t know.” She had a deli tray with a little piece [of dog poop] on it, and she did! I turned my head.

Everything You Need to Know About the Miss Universe Trump Tape