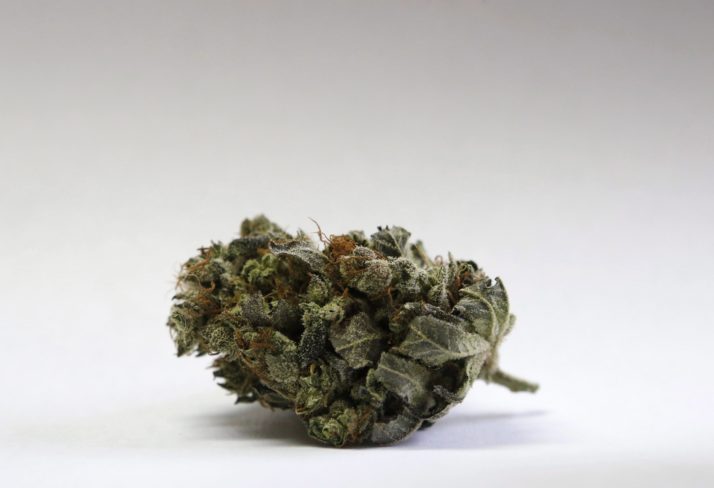 Learning to use cannabis well is an underrated life skill. Smoking circles are a fast and easy way to make friends, and they’re way more intimate than dollar beer night at the trashy local bar. It's no wonder 22 million or so American adults use cannabis monthly, according to a 2015 study, and a June survey found that daily use is on the rise. It's the third most popular mind-altering substance in the country, after booze and nicotine.

Despite the persistent march toward legalization, about 87 percent of weed in North America was purchased on the black market, according to a 2016 survey. That means most of cannabis culture looks different based on the rules and regulations implemented by different states. Whether buying from an authorized dispensary or a friend's cousin's weed guy, there are real risks that come with your first experience with pot. They range from simply getting ripped off with weak product to health issues to serious punishment. Here are a few tips that will keep you safe, happy, and maximize your enjoyment.

As with any legally ambiguous activity, it’s important to understand the law of the land before potentially breaking it. The more you know, the more confident you’ll be if something goes wrong. "Even states where weed is legal have strict rules about how it’s bought, sold, grown, and consumed," says Tim Johnson, veteran law enforcement officer and the founder of Ohio-based security firm Cannabis Safety First.

US weed prohibition laws have changed in spurts since Oregon first decriminalized the plant in 1973, so they’re inconsistent state-by-state, Johnson explains. The federal government still considers cannabis to be a Schedule 1 drug, even though eight states and Washington D.C. say it’s legal for recreation and 30 for medical use. Legalization doesn’t mean everyone can buy, smoke, or grow on a whim. In California, for example, it’s illegal for anyone under 21 to buy weed. Even those of age can only purchase an ounce per day of flower and eight grams of concentrated oil. Johnson advises looking up whether your state has laws against certain types of paraphernalia, as well.

Brandon L. Wyatt, Esq., an army veteran and Howard University School of Law alum who serves on the board of the Minority Cannabis Business Association, points out that the ramifications of getting caught can go beyond fines and jail time. "Cannabis use can have an effect on your federal entitlements," he tells VICE. For example, you can be evicted from a public housing project or military barracks for possessing cannabis, even if you have a medical card. Private landlords and employers also reserve the right to evict residents or fire employees for consuming cannabis, even in states where it's legal.

"Even though it's a great thing, it still requires a level of discretion. Don't post publicly about it on social media. You are not protected," says Wyatt.

In states where recreational cannabis isn’t legal, understanding the different patterns of enforcement is key. Earlier this month, New York City stopped arresting people for smoking weed in public, opting instead for a court summons and a $100 fine. Statistics also show that cops treat cannabis possession very differently depending on race. The ACLU reports cannabis use is "roughly equal among Blacks and whites, yet blacks are 3.73 times as likely to be arrested" for possession.

It’s not as fun as getting stoned, but researching local laws and police behavior in your community will make your high safer and sweeter. “Even the first time you take a J, you have to answer some of these questions for yourself, or at least be at peace them," says Wyatt. "Because you can lose your job. You can lose your housing, you can lose your federal benefits. And if you’re a minority, you need to be extra careful, discrete, and informed. It’s about the more you know.”

If the above hasn't seen you abandon the quest, the first step to getting high is finding a reliable connect. Tony Greenhand, an artist who makes a living selling custom smokeable sculptures and who rolled a joint that was at one point the largest in the world, recommends finding the highest quality bud possible for your first experience. “It can be tempting to buy a cheaper or weaker alternative,” he said in an email, but that’s a rookie move. “More often than not, a cheaper option has had something go wrong in the growing process or curing process. This is most true of weed found on the black market. A cheaper black market option may contain pesticides, mold, bugs or debris.”

When buying the not-so-legal stuff, it’s important to find a safe, honest and competent dealer. Ask around and find one who is trusted by people you trust. Whether you’re at a dispensary, buying from a neighborhood dealer, you can vet weed from someone you don’t know with a few simple questions. Greenhand says you shouldn't be afraid to ask the name of the strain, where it was grown, and if it has been tested for mold and pesticides. The most important thing is that the person supplying the drugs is dependable.

When you’re buying weed for the first time, the salesperson will categorize it with three different labels that refer to its effect: indica, sativa, and hybrid. Indicas have a depressive, physical effect that can melt you into the couch. Sativas are psychoactive, cause trippy visuals, and act as stimulants. Hybrids combine the effects of both, though often lean more in one direction than the other. There are tons of online resources for learning about different strains, so feel free to look up what your dealer is offering for more info.

The first time you buy, Greenhand recommends purchasing as little as possible. “If you don’t want to smoke a lot, don’t buy a lot,” he says. “Your first time you shouldn’t need more than a gram. Just remember that cannabis can take some time to reach its full effect so take your time and you should be fine.” Even for the pros, there’s such a thing as too much weed.

If you’ve just been offered a hit of something by a friend, ask what strain you’re dealing with. If it’s an indica, take it easy unless you’re comfortable turning into a puddle where you stand. If it’s a sativa, make sure you don’t need to operate heavy machinery or sign any legal documents for a few hours.

Now that you’ve acquired the weed, it’s time to smoke it. Both Greenhand and Wyatt stress that it's best to pick a familiar, private location for your first time. "Don't be somewhere that's going to cause you paranoia," says Wyatt. Surround yourself with people you know and feel comfortable around. Going to concerts, theme parks, and festivals stoned can be fun, but best to avoid the first go around. The same goes for mixing alcohol, cigs, and other drugs with weed. Let yourself learn what a cannabis high feels like on its own.

Next, choose a method. Greenhand suggests first-timers use a small pipe, since they’re cheap, easy to find, and easy to use. Most gas stations and smoke shops throughout the country have them regardless of cannabis laws, though glass pipes are illegal in some states. In a pinch, you can make a pipe out of just about anything, but Greenhand recommends avoiding DIY at first.

Greenhand says vaping the flower is also a good method for first-timers. It’s more expensive and may require ordering the rig online, but the experience is gentler since the cannabis doesn’t combust. Others argue that the humble joint is the best way to smoke, but if you’re inexperienced it can be difficult to roll one.

Bongs, dab rigs, and edibles should be avoided by first-timers, our experts say, until you build up a bit of resistance and start to understand your limits. “When you try weed the first few times you have little to no tolerance to it,” Greenhand says. “Over-indulging without building a tolerance can result in anxiety, paranoia, or panic attacks.” If you’ve had enough, clearly communicate that you’re good. Give yourself time to feel how high you are before continuing.

There are also some techniques that are downright dangerous. Certain off-brand vape pens have been known to explode mid-use, and there have been documented deaths due to “fake weed.” Triple check that your sources are trustworthy.

Pick the right spot to get high. Location can be the difference between a great experience and an awful one. Even seasoned cannabis users can get lost in the mountains or ground an aircraft by getting high in the wrong place or at the wrong time.

"Don't be in a car, and don't drive," Wyatt says. "You can be hit with a DUI, whether you're a recreational or medical cannabis user. A lot of minorities fall victim to that because of how our community policing is done. Even if the smell is on your clothes during a random stop, that can get you in a lot of trouble."

Also, don’t give weed to your dog. Just don’t.

Come down if you’re too high

If you’ve gotten too stoned, you may experience hallucinations, nausea, paranoia. The first thing to do is not call 911. Then, breathe. Greenhand’s strategies for lessening an overpowering high are eating a big meal, exercising, and if all else fails, crawling into bed and going to sleep.

Congratulations! You’ve gotten stoned. Now it’s time to have fun. Most pleasures of the body and mind are enhanced when you’re loopy, so prepare a suite of activities in advance. “You’re going to want to eat and drink, so go shopping BEFORE you smoke to prevent buying a five pound bag of gummy bears,” warns Greenhand. There are dozens of TV shows, movies, music, and video games that are tailor-made to appeal to stoners. “But when you’re high, you’ll see time will fly by. You’ll enjoy simple things, making it pretty easy to stay entertained.”

Fuck! You have a drug test coming up

You’ve just smoked weed for the first time. You’re stoked—and then you remember your future employer/probation officer/welfare provider expects you to pass a drug test soon. What do you do?

THC can stay in your system for around 30 days, since it embeds itself in your fat cells. There are a number of detox drinks that claim to clean your piss enough to pass a standard drug test, but only one seems to work flawlessly. Experts recommend asking the local headshop for its best detoxifier—but don’t say it’s for a drug test.

So now you've smoked your first weed and, ideally, gotten your first high. There's a whole world of giant bongs and fancy weed-infused cuisine and wacky ways to get stoned ahead of you. Be prepared for feelings of anxiety and potentially finding yourself stuck in a storm drain. Be prepared for backlash from mainstream culture. Be prepared to take a tolerance break or even stop completely if it turns out not to be the drug for you. Go forth, learn the law, get stoned, and have fun.

How to Smoke Weed Out of an Oil Lantern

This Photographer Shot Portraits of His Famous Friends in the Tub