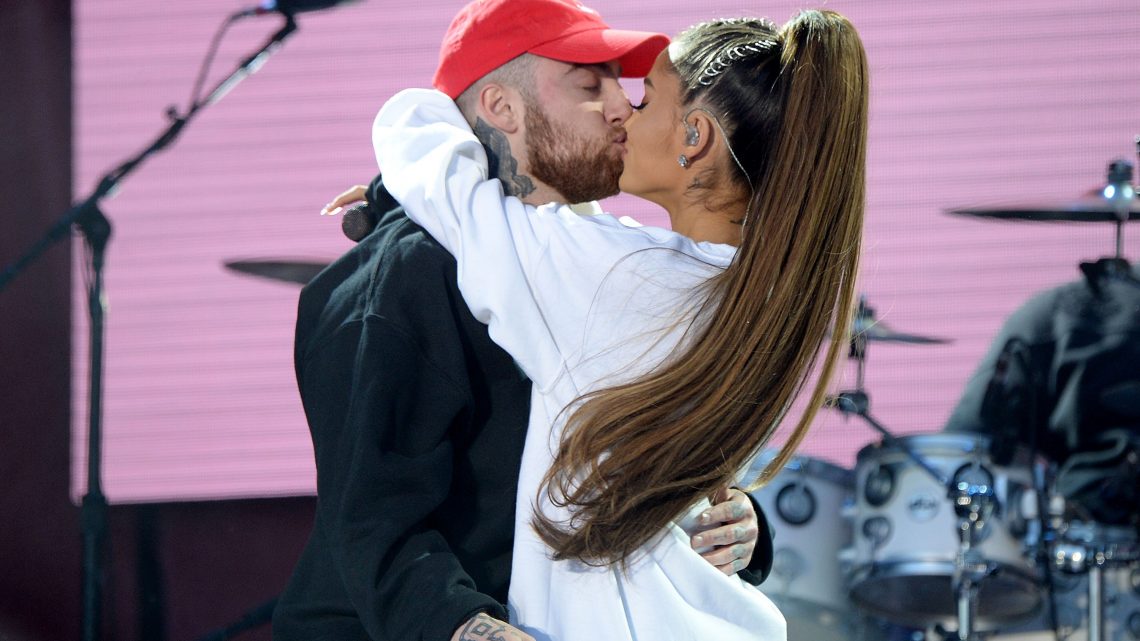 Ariana Grande, Mac Miller, and Why We Blame Women for Male Substance Abuse

Before he died of an apparent overdose on September 7, Mac Miller was forthcoming about his long, complex history of substance abuse. The mixtapes that catapulted him to stardom were unfiltered snapshots of the exhilarating highs and devastating lows of addiction. 2014's Faces, for example, opens with Miller deadpanning, “I should’ve died already," and is peppered with lines like, "I’m fucking with drugs and now I’m a junkie."

In a 2016 FADER documentary, he spoke openly about his narcotic of choice, lean (a combination of codeine and promethazine), saying, “Weed didn’t relax me from everything, it made me more paranoid about all the shit happening. So I needed to get a drug that was a little more numbing if you will. And less, like, in your head. So yeah, that’s what sparked me doing other drugs because I hate being sober. I wanted a drug to do."

Despite this transparency, in the hours after TMZ broke the news of Miller’s death, online discourse wasn’t focused on the grim realities of substance abuse. Rather, grieving fans lashed out at Miller’s ex-girlfriend Ariana Grande, blaming her for the rapper’s untimely death.

"It's deeply unsurprising to see a cyber mob descend. There’s a very quick snowballing that happens, where it’s maybe one or two people, then all of a sudden people almost get permission from other people doing it," Danielle Citron, a law professor at the University of Maryland and author of Hate Crimes in Cyberspace, tells VICE. "It seems normal, and the mob moves to pretty strong extremes. It goes from like, ‘I hope you feel bad,’ to like, ‘Bitch, you should die.’ They see other people saying it and think it’s not so bad to say that, and it becomes somewhat like a game. But of course to the person being targeted, it’s not a game."

The harassment was so vitriolic that Grande—normally a prolific social media user—disabled comments on her Instagram and went silent on Twitter. As the hateful missives piled up online, the media was quick to call out the sexism of the situation. Miller’s friend Shane Powers defended Grande on his podcast saying, “There was no one... more ready to go to the wall for him when it came to him being sober, and she was an unbelievably stabilizing force in his life.”

“The very fact that [Grande] felt she had to withdraw, that she had to exit the public sphere, is profound,” Citron says. She adds that part of a pop singer's job is engaging with fans, so being forced to retreat is a professional blow. "It’s significant for anybody to be silenced. I hate to say that it’s incredibly common, but it is, and it’s depressing.”

Grande broke her silence to pay tribute to Miller, posting a black-and-white photo of him on September 9 and a video on September 14, paired with the caption:

i adored you from the day i met you when i was nineteen and i always will. i can’t believe you aren’t here anymore. i really can’t wrap my head around it. we talked about this. so many times. i’m so mad, i’m so sad i don’t know what to do. you were my dearest friend. for so long. above anything else. i’m so sorry i couldn’t fix or take your pain away. i really wanted to. the kindest, sweetest soul with demons he never deserved. i hope you’re okay now. Rest.

Her words are heartbreaking, partly because Grande has shouldered more than her fair share of pain in the last two years. After a terrorist attack outside her 2017 concert in Manchester, England, killed 22 people, many of them young fans, the singer reportedly suffered from PTSD.

Grande’s words are also devastating because they imply partial responsibility for Miller’s drug use, as though overcoming addiction were her battle, not his. Grande’s harassers echo this sentiment, criticizing the pop star for not staying with Miller while he struggled to get clean. They’re focused on the timeline of her whirlwind romance with SNL star Pete Davidson. (Grande broke up with Miller on May 9, was reportedly dating Davidson by May 21, and was engaged by June 11.) They argue she broke Miller’s heart, driving him to use and act recklessly.

After Miller was arrested for a DUI and hit and run on May 17, Twitter user @FlintElijah wrote, "Mac Miller totalling his G wagon and getting a DUI after Ariana Grande dumped him for another dude after he poured his heart out on a ten song album to her called the divine feminine is just the most heartbreaking thing happening in Hollywood."

Grande responded with a statement defending herself. “How absurd that you minimise [sic] female self-respect and self-worth by saying someone should stay in a toxic relationship because he wrote an album about them,” it begins. "I am not a babysitter or a mother and no woman should feel that they need to be. I have cared for him and tried to support his sobriety and prayed for his balance for years (and always will of course) but shaming/blaming women for a man's inability to keep his shit together is a very major problem.”

Van Pelt explains that this mindset is pervasive and insidious. “From the beginning of time, women have always been expected to accept the blame,” she says. “I mean, you can even equate this to what we see going on with sexual harassment and sexual assault, and women not coming forward after they've been assaulted, because they're blamed for the men assaulting them, as if their very existence, their very role, makes them blameworthy.”

It’s a sentiment echoed by Patrick Wanis, a human behavior expert and therapist who counts celebrities among his clients. He adds that patriarchal religious traditions bolster sexist values. “Who do religions fear the most? You're going to say to me: Satan, the devil. It's actually women,” he tells VICE. He and Van Pelt both mention the story of Adam and Eve and point out that the original sin narrative has shifted over the centuries to blame women for the fall of man.

When a celebrity dies, the resulting media circus becomes a macabre form of entertainment. Jacque Lynn Foltyn, a professor of sociology at National University in La Jolla, California, has studied the public's fascination with celebrity death for years. "There has been a kind of hysteria of the Grim Reaper slaying celebrities, one after the other," she tells VICE. "I view these deaths as part of the larger obsession with not only drugs and celebrity in contemporary culture, but also death itself."

An untimely death like Miller's is an objective tragedy, but it's amplified by tabloid rubbernecking and grieving fans who feel like they've suffered a personal loss. Wanis calls this one-sided connection a "para-social relationship." "There are very few fans that can say, ‘I actually know Mac Miller,'" he says. "People will say, 'I know him because I’ve heard his music, and I saw him on tour, and I watched an interview, and read these quotes.’ But no, you don’t know him. You only know parts of him that he chose to reveal."

When legions of fans lay claim to a famous artist, it can be easy to discount the grief of their actual friends and family. The public is particularly cruel to women who lose a celebrity loved one. Yoko Ono was accused of profiting off of John Lennon's murder in 1980 and conspiracy theorists still allege that Courtney Love killed Kurt Cobain in 1994.

When Heath Ledger overdosed in 2008, paparazzi hounded Michelle Williams so relentlessly she fled to a small town in upstate New York with the couple's two-year-old daughter. Her friend Daphne Javitch told Vanity Fair, “To have that kind of attention, in such an aggressive way, around you and your child, when so much of it is coming from what truly is tragedy for a family… it’s a kind of violence.”

Similarly, when Cory Monteith overdosed in 2013, his girlfriend and Glee co-star Lea Michele hid out at Kate Hudson's house to escape the press. "It’s pretty intense,” she told Ellen DeGeneres. “And then if you smile, it’s like, ‘She’s so happy!’ And then if you look sad, they’re like, ‘She’s terrible.’ It’s really hard—there’s so many different types of emotions—to have people watching every step of the way."

Like Grande, Asia Argento was blamed for Anthony Bourdain's death by suicide this summer, because she was photographed holding hands with another man in Rome. Van Pelt tells VICE that the tendency to blame women for a man's self-destruction is troubling. "What does this say about our culture?" she rhetorically asks. "Does this say that people believe that women are stronger, more self-sufficient, more responsible as individuals than men are? That men are the weaker sex? They are not responsible for themselves? That they can't take care of themselves?"

The lives of the rich and famous provide a lens through which to look at larger societal trends, and the spate of celebrity overdose deaths in the news lately mirrors the larger opioid epidemic plaguing the nation. According to the National Center on Health Statistics, overdoses have become the leading cause of death for Americans under 50, and celebrities are hardly immune. “Addiction will kill you no matter what you do for a living,” says Howard Samuels, an addiction therapist who works with celebrity clients.

He adds that overcoming addiction is rarely a linear process. "I have many people in my practice, whether they're high-profile or not, that have been in recovery but they've relapsed,” Samuels says. “Now, the problem with relapsing is there's a good chance you could die, and that is what happened in [Miller’s] case. In the last few years, I have never seen so many people die of addiction, in my 25 years of doing this. Never.”

Samuels blames heroin cut with fentanyl, an extremely powerful opiate, for the deadly epidemic. He is adamant that fame doesn't cause addiction, saying most of his patients are genetically predisposed to abuse drugs and alcohol. "Everybody sort of treats celebrities like they’re some kind of alien race, that they fall into a special category for drugs and alcohol, which really isn’t true,” he explains. But he admits that being a celebrity can exacerbate the struggle to get clean.

He cites confidentiality issues, especially if a famous patient shares personal details in group therapy sessions. But more insidious is the risk that a recovering addict will be tempted to use again by people in their inner circle. "If you know a high-profile person is using, the way into that inner circle is with an eight-ball of blow, or whatever the celebrity's drug of choice is," he says.

The problems highlighted by the Ariana Grande-Mac Miller saga are numerous and complex. But Wanis argues that changing the culture starts with fans, who can't presume to know what Miller was feeling before he died. "The bottom line is we have to stop blaming other people for an individual's choice. If Mac Miller turned to drugs or alcohol, that's not because Ariana Grande broke his heart. People don't create your issues. They trigger your issues. And that's a big difference," Wanis says. He points out that in the wake of their breakup, Miller wished Grande well and took responsibility for the consequences of his drug use.

"This is a potential moment for fans of Mac Miller to get really clear in their own lives: For what am I responsible?" says Wanis. "Do I blame everything on things outside of me, or do I accept responsibility for everything that happens in my life? You don't determine what will necessarily happen to you, but you will determine, 100 percent, your reaction and your response. All Ariana Grande can do is say, ‘OK, I'm not responsible. I did the best that I could,’ and move forward. That's really about self-compassion."