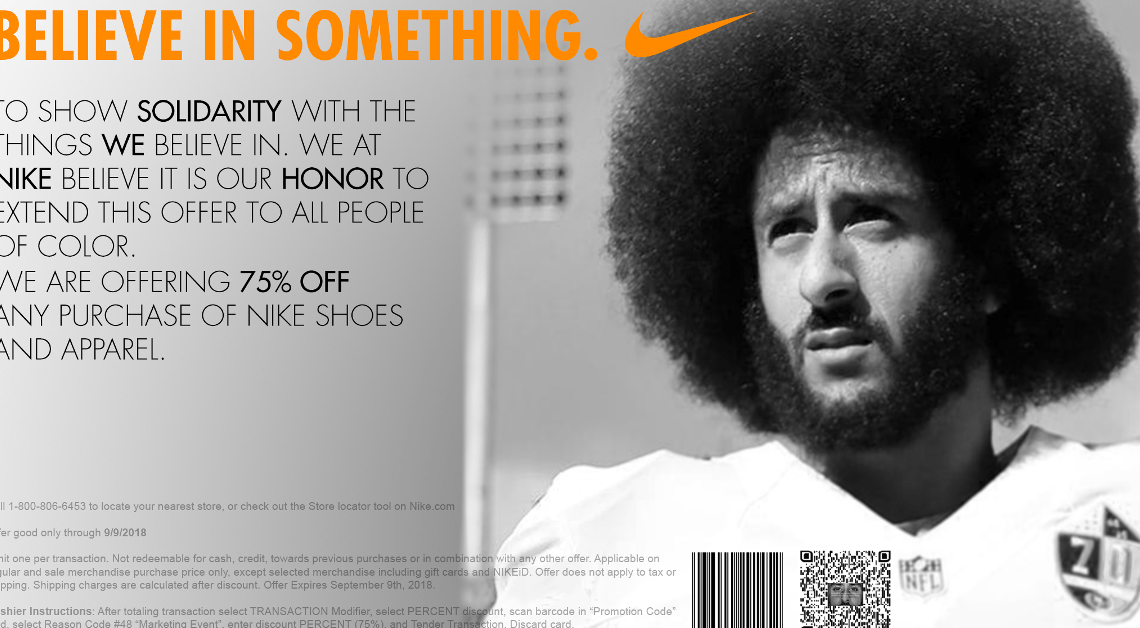 Racists Are Peddling Fake Nike Coupons for ‘People of Color’

In the few days since Nike dropped its Colin Kaepernick ad, we’ve seen pissed-off MAGA bros incinerate their own sneakers, Trump angrily weigh in, and a Louisiana mayor try to ban (then un-ban) Nike products from his city’s rec centers. Now, unfortunately, it looks like we've reached the "racist 4Chan hoax" phase of this godforsaken story.

Trolls on the notorious site’s /pol (a.k.a. "politically incorrect") forum have been circulating fake Nike coupons for “people of color," USA Today reports. The coupons, which feature photos of Kaepernick, promise massive discounts on Nike shoes and apparel for non-white folks and "urban youth" who use them in-store, claiming Nike rolled out the deal "to show solidarity with the things we believe in." Obviously, they're totally bogus.

Aside from being blatantly racist, the coupons might actually be trying to incite violence. According to Snopes, scan the QR code on one of them—say, if you're a Nike store employee—and you'll see the following message: “This is a ROBBERY, Move slowly and put all the LARGE bills in the shoe box OR everyone DIES.”

According to USA Today, Nike knows about the coupons, and it's warned all of its US retail outlets to watch out for them. Meanwhile, the trolls over at /pol are congratulating themselves for making headlines with the racist scam—though as Jack Gillis, executive director of the Consumer Federation of America, told USA Today, "scam" doesn't quite cover it.

"I wouldn’t characterize this as a scam, but a full on racial epithet," he said. "This is nothing more than a dog whistle to a small, and unfortunate, segment of America. Another way to put it is that this is a racial statement masquerading as a scam."

At the end of the day, all the backlash, outrage, and controversy over the Kaepernick ad has been a windfall for Nike: Since the spot came out, the company's shares have hit an all-time high.

We Gave the Covers of Romance Novels an Inclusive Makeover