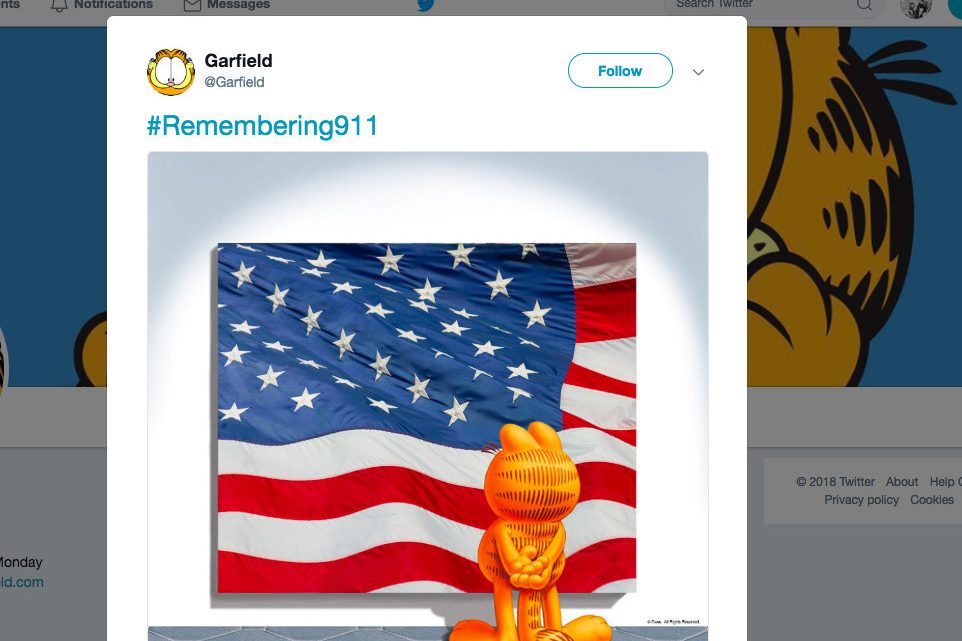 Seventeen Years Later, We Still Have No Idea What to Do on 9/11

One of the best things written about America in the days after 9/11 was "Not Knowing What Else To Do, Woman Bakes American-Flag Cake," a classic Onion article that isn't so much a joke as a short story about a woman who feels helpless and bereaved and confused and patriotic all at the same time. She has "already donated blood, mailed a check to the Red Cross, and sent a letter of thanks to the New York Fire Department," and doesn't know what else to do. "I thought I'd make something special or do something out of respect for all of the people who died," she says in the story. "All those innocent people. All those rescue workers who lost their lives."

Those days seem so distant now. It's hard to recall how aimless everything felt at the time. I will never know what New York was like and can only conjure up secondhand memories through photos and news reports—the waves of ash, the evacuations and panic, the people who never came home from work, the rescue workers sifting through the rubble. Most Americans didn't deal with any of that; we were bystanders to a tragedy, shocked and awed. I remember—hazily—my gym teacher telling the kids something horrible had happened and letting us know that if we needed to talk to someone we could leave class and go to the counselor's office. It was no doubt the right thing to say in the circumstances, but also massively inadequate. What could a gym teacher say about 9/11? What could a school counselor? What could Garfield the cat say 17 years later? Not much, it turns out:

The US is nothing if not the world's gym teacher, and as a nation we are awful at dealing with tragedy. Baking a flag cake would have been a far more rational reaction to 9/11 than the ruling class's actual response, which was to launch wars not just in Afghanistan but also Iraq, a monumental failure of morality and judgement that the world is still grappling with. The security state ballooned, and the war on terror blossomed into a thousand atrocities. Mostly, the country used the attack as an excuse to descend into a flurry of jingoism and Islamophobia from which we still have not emerged.

There's a specific type of 9/11 remembrance that glosses over all of this, which makes a certain amount of sense and can even be powerful. If you go to the 9/11 museum in New York, you descend into an immense basement where some of the actual wreckage of the day—including a fire truck—stands like modern art. You walk through exhibits that take you back into the confusion of the early news reports and the developing story; you can even listen to audio of the final phone calls some passengers made to their loved ones before their planes crashed. It's a memorial and an open wound all in one. I can't imagine what it's like to walk through it when you have a personal connection to 9/11.

Garfield the cat standing respectfully in front of a painting of an American flag is like a grotesquely simplified version of that. It belongs to a crass genre that includes Betty Boop remembering 9/11 and America's chain stores and restaurants sharing flag-drenched iconography on the day. It offers nothing but an inadvertent parody of grief that seems flattened and stripped of actual emotion. There is no sense of the agony of the day, let alone the devastating consequences that followed. 9/11 has become an occasion for the nation's most merchandised cartoon cats to engage in fits of national worship. Like the Fourth of July, only it would be disrespectful to drink. Like Memorial Day, only unfathomably stupid.

Though no one talks about Glenn Beck much anymore, for years the talk show host and demagogue wielded a remarkable amount of power on the right. One of his initiatives was called the "9/12 project." The idea was that we should all strive to be as patriotic and selfless as we were the day after the attacks, when America was largely unified for once. Given the road that patriotism and unity led us down, going back to 9/12 now seems like a downright chilling prospect. Instead, we should be moving to strip 9/11 of its terrible political power. But when we are no longer arguing about terrorism as an urgent threat, and not particularly interested in throwing ourselves back into the emotions of that day, what's left? What are we commemorating? The president, for one, has no idea.

We will not get any more coherent about 9/11 as it recedes into the past. This is probably healthy—a superpower gripped by grief is a dangerous and unstable one. Knowing America, the 9/11 remembrances will get more and more abstract and mawkish as time goes by. Comic-strip characters saluting the troops, Instagram models draped in flags, a few cringe-worthy ads. Those may eventually seem like oddly appropriate responses. When you don't know what to do, there are worse things to do than bake a ridiculous cake.

How to Have a Good Hookup in College