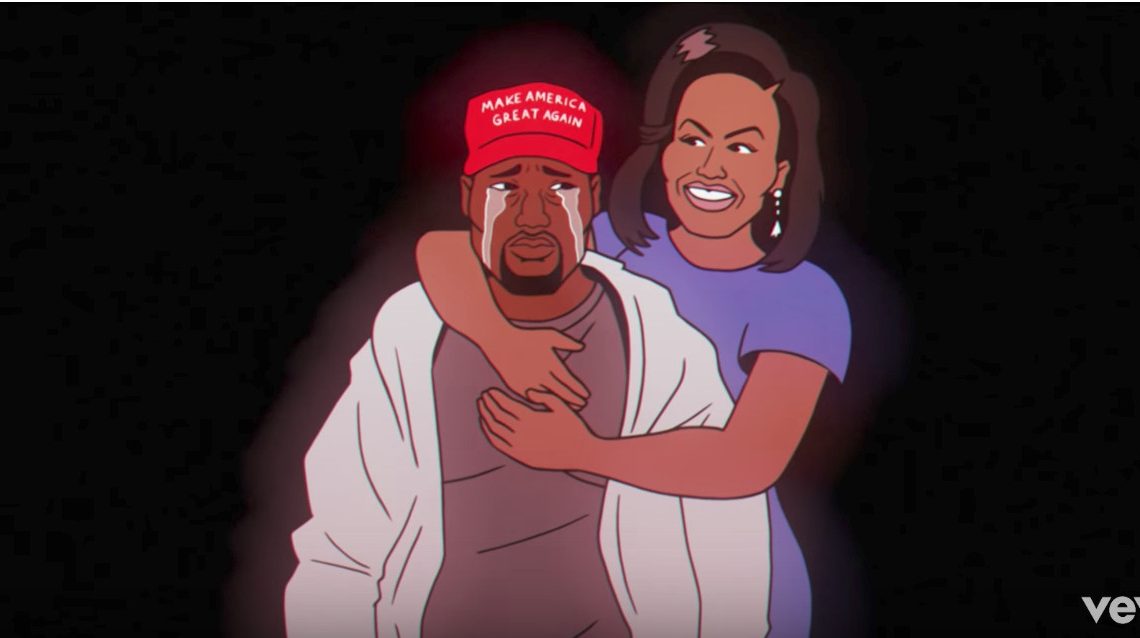 This past Sunday Childish Gambino, otherwise known as Donald Glover, released a fully animated video for “Feels Like Summer,” which he co-directed with Ivan Dixon and was animated by Greg Sharp. The video depicts a disengaged cartoon Gambino walking through a suburban neighborhood where celebrities like Lil Pump, Nicki Minaj, and Travis Scott frolic and interact like mischievous schoolchildren. Those scenes are intercut with eerie vignettes of celebrities who have faced major struggles or public condemnation, including Chris Brown and Michael Jackson.

In the days following the video’s release, the most widely discussed scene was a controversial image of Michelle Obama comforting a crying Kanye West wearing a Make America Great Again hat. Viewers, black women in particular, were quick to point out that the image seemed to imply that black women are a natural choice to help black men through their struggles, even those who have caused a lot of suffering for themselves and the people around them. This concept, recently peddled by Jay-Z on 4:44 as well, has frustrated audiences because it gives men room to mess up and be rehabilitated (sometimes by their victims) while expecting women to rehabilitate themselves and the men in their life. Glover has yet to respond to the criticisms, and likely never will considering his past reticence in similar situations. Dixon and Sharp recently explained some parts of the video to The Fader but replied “no comment!” to the question about Michelle Obama and West.

As a powerful male artist who has clearly struck a nerve with black women (and not for the first time), I see his silence more like dismissiveness than the typical charming, mysterious woke bae persona he upholds. Sure, it’s not clear that the intention of the West-Obama image was to make this particular claim about the role of black women in society, but there’s also not much in the video to counteract critics’ interpretation. And since the video was created by three men and features sympathetic crying images of both West and known-abuser Chris Brown, both the messages and who the storytellers are holds greater significance.

Glover has recently removed himself from discussions surrounding his music videos despite the fact that the videos are seemingly intended to spark conversation among viewers and his identity clearly informs them. His twitter account only posts projects but no opinions or interactions with his audience. Interestingly, in “Feels Like Summer” Glover’s instinct toward remaining outside of the realm of critique is even seen in the way his cartoon character behaves. Gambino is depicted as an observer with a cooler-than-thou bop, silently watching those around him as though he’s somehow not privy to the criticisms addressed in the video’s running commentary. His character throws some side-eye while the lyrics add a disapproving tinge to his glances, but he never directly interacts with those around him, instead maintaining an unamused expression and tuning out via his ear buds. Strikingly, his refusal to respond to his critics about the West-Obama image mimics the same attitude of his cartoon; he seems to view himself more as a neutral commentator than a subject worth interrogating.

But no one, of course, is a neutral commentator, especially when it comes to topics like gender roles. And Gambino as a black cisgendered man certainly enjoys a similar “male genius” privilege as Kanye West and other people in his male-centric video, which makes it easier for him to overcome controversial statements and behavior. It feels like Glover is to an extent banking on the idea that his reputation as a deep thinker will earn him the benefit of the doubt in the Obama-West controversy and in his decision to sympathetically depict Brown. But this “genius” status is also much harder for other demographics, particularly black women, to attain. Wielding that status with care means voluntarily holding yourself responsible to the concerns of less powerful people because you know you could technically get away with … a lot.

Glover has already overcome some memorable missteps when depicting and discussing women of color in the past. In 2011 he defended his right to make rape jokes and he’s also been accused of fetishizing Asian women in his act. A horrifying sketch comedy video of him raping a male friend still lives on YouTube and has been written about in praise of how far he’s come. That’s a far cry from the decades of ridicule fellow genius Lauryn Hill received after her famously-vulnerable MTV “Unplugged” performance or Janet Jackson’s forever-compromised national image after Justin Timberlake exposed her breast during their Superbowl performance.

Since the advent of his woke bae persona though, the criticism he has faced has centered more around how to thoughtfully depict women on screen, particularly Black women, as Glover has a proclivity for using powerful women to demonstrate his own greatness. In “This Is America,” for example, SZA is relegated to an ornamental prop gazing up at Gambino as he dances shirtless on top of a car. But this moment didn’t cause much of a stir compared to an episode of Glover’s FX series Atlanta. The episode, titled “Champaign Papi,” had a scene where a darker skinned black woman angrily confronts a white woman about her biracial relationship in a way that some viewers believed perpetuated the angry black woman trope. To me it stuck out as unrealistic and lacking any meaningful nuance that could make it more than a cringy overreaction. (The episode was written by male writer Ibra Ake.) The show’s only female writer subsequently spoke out about her frustrations with having to answer for Atlanta’s gendered shortcomings on her own.

In a 2018 New Yorker profile, Glover said, “I’m a little better than Chris (Rock) because I had (Chris’s TV show ‘Everybody Hates Chris’) to study. And now I’m actively looking for the black female to replace me.” Such statements sound at first like the idyllic woke bae version of Glover that many hope he is, and of course help to fuel that image. But perhaps he could start this “active” search by bringing more female writers into Atlanta’s writer’s room, collaborating with a female director on a major music video to avoid future gaffes, responding to the Michelle Obama controversy, or leading a more ambitious talent search program similar to those spearheaded by Lena Waithe and Ava Duvernay. Duvernay for example hired 25 new female directors for her OWN series Queen Sugar, 21 of them being first-time directors and more than half being women of color. She did this to prove that women directors already exist and are ready to work, as someone who is frustrated by the all-too-common claims like Glover’s that producers are still looking for the right talent.

As he’s given more creative license, bigger platforms, and seems increasingly comfortable courting controversy within the black community, hopefully Glover will realize he has a lot of work to do to regain the trust of a critical section of that population. If he doesn’t start pulling in more female collaborators yet insists on participating in gender commentary and ducking black women’s concerns, why should his “male genius” status buy him the benefit of the doubt? I for one don’t believe he’s the right person to portray the black female experience at a culture-defining level.