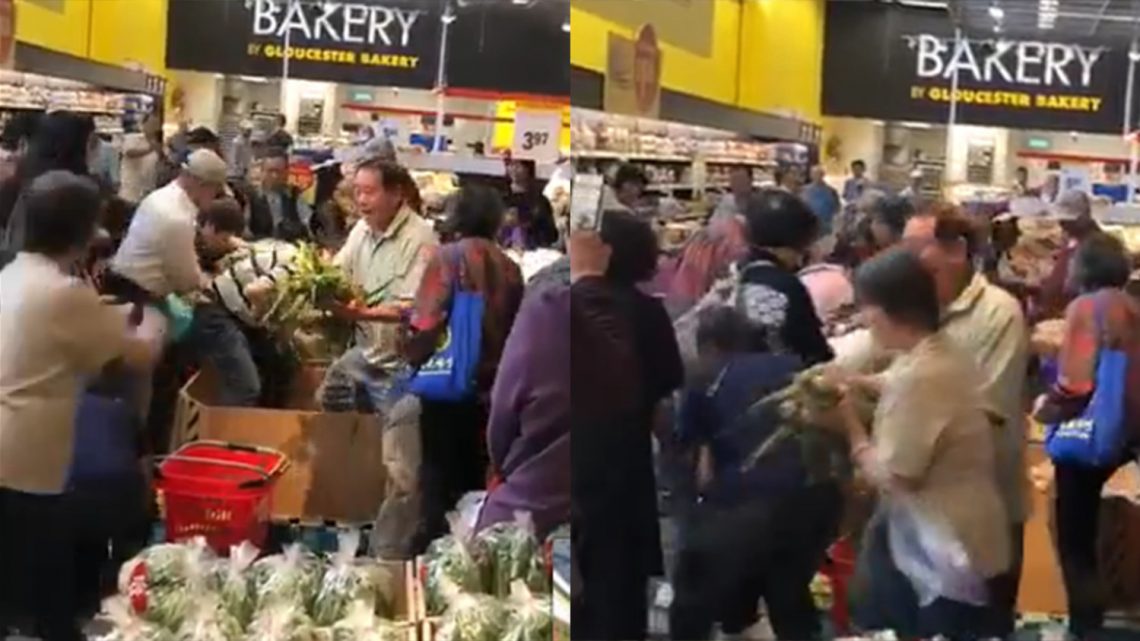 For years now, people have gawked at videos of shoppers trampling each other or beating the ever-loving shit out of each other over a discounted TV during a Black Friday sale. This typically doesn’t happen in Toronto; however, we did lose our goddamn minds over *checks notes* uh, corn?

Yeah… earlier this week a video taken at an Ontario No Frills—for those non-Canadian readers, No Frills is a discount grocery store popular among certain Instagrammers—showcases a bunch of people losing their goddamn minds over our favorite cobbed food—just a good ol’ party with shit getting thrown and old dudes getting pushed to the ground.

Just look at this insanity. Like most guerrilla films of this genre, the asinine premise just furthers to intensify the drama that unfolds. And you can’t fully appreciate a video like this until you break it down in painstaking detail.

The video starts, like a Mission: Impossible movie—already in the middle of the action. People are crowding around a box desperately reaching in. There is a roar in the air, the ground strewn with husks that perished in the unseen part of the battle. Like a beach ball at a concert, there is a cardboard lid surfing over the crowd tangling for corn.

This cardboard works as our introduction to our first major character in this drama, a little guy I like to call “the cardboard throwing man.” The cardboard kind of works its way out to him and he whips that shit over the head of the crowd. You can see from the throw that this wasn’t well thought out—no, it was instinctual. Something (cardboard) got in the way of the cardboard throwing man and he just acted (throwing it.)

Cardboard throwing man is a doer, not a thinker.

Just as the cardboard hits the ground we meet our video’s primary antagonist. He appears from the scrum like some sort of corn-happy bottom feeder scoping out the floor for dropped treats. In his search, he accidentally puts his shoulder into an elderly man behind him who is patiently waiting his turn for some cheap corn. This shoulder push sends the elderly guy teetering and backpedalling. The guy hits some discarded shopping bins and hits the floor like an old sack of potatoes. In a brilliant call back to earlier in the clip, we see the cardboard go flying in the air again just as the old guy hits the ground.

The fact that he sends some old dude ass over tea kettle doesn’t bother the bottom feeder though. He doesn’t even seem to take notice and just keeps hovering up all the corn on the ground he can and depositing them into his basket like a game show contestant.

Just look at the mess of bodies in the above gif and remember that it’s all over corn, the world’s second-least sexy vegetable.

From here, the video just turns into chaos as people try to get the corn no matter what kind of destruction they leave in their wake. One man walks over another collection of vegetables just in order to get out of the melee and a man with a baby strapped to his chest steps in to help the fallen man. All the while the bottom feeder just keeps filling up his bin with more and more corn.

To finish off the video, one of the earlier characters is reintroduced. That’s right “cardboard box throwing man” and, wouldn’t you know, that sun of a bitch has got himself some corn. He turns around with bushels of it in his hand and his (I assume) wife comes into the frame beckoning him to be a better person and stop doing what he’s doing. With his arms filled with corn, he complies and he and his wife exit frame presumably to drive their biofuel-using car to a nice dinner of corn on the cob with creamed corn and some cornbread. Just after they leave the video ends but not before we see the bottom feeder throw even more bushels of corn into his bin, a soon-to-be chef’s kiss.

Let this be a reminder to all of you—sometimes the bad guy wins.

Now, again, I need to reiterate that this is over corn. CORN!

Frankly, there are a lot of things that would cause me to push over elderly men in grocery stores, but corn sure isn’t high on my list.