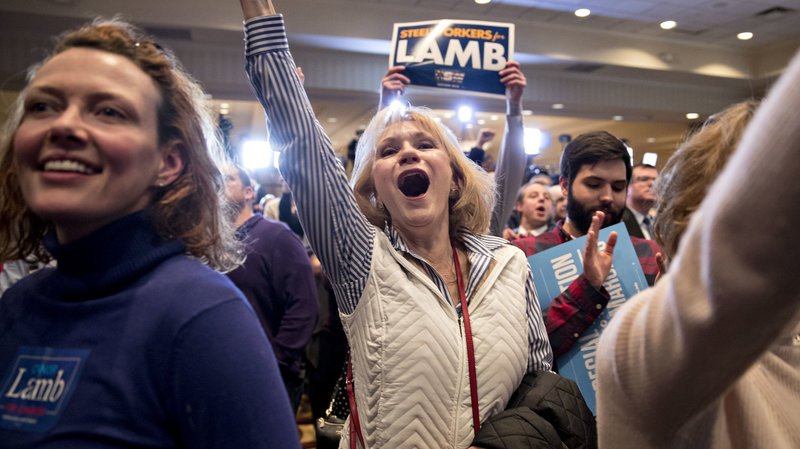 It looks like an increasingly safe bet that Democrats will make major gains in Congress after the November midterms, and quite possibly win control of at least the House of Representatives. Donald Trump's presidential approval numbers are historically bad, and the "generic" (Democrats v. Republicans) ballot numbers favor the opposition as strongly as they have in a long time. The Dems have also been showing up in unusually high numbers in their congressional primaries, and the party in power has traditionally had a tough time getting its supporters to come out when they're already running the show. All of this adds up to bad news for the GOP, and encouraging signs for people who want to see Democrats running investigative committees and making life miserable for Trump cronies.

But major gains by Democrats may not be enough for voters—not if the Democrats are the same ones who have occupied DC for what seems like forever.

On Tuesday, Ayanna Pressley—a 44-year-old black city council member in Boston—romped to victory in Massachusetts's Seventh District primary, unseating a progressive Democrat who was also known as an antagonist of Donald Trump. Now, even taken in tandem with Alexandria Ocasio Cortez's stunning upset of powerful House Democrat Joe Crowley earlier this summer, Pressley's win doesn't represent the crest of some kind of left-wing revolt. Plenty of establishment Democrats have done just fine in their primaries this year, and Pressley is actually a former John Kerry staffer—which is to say, not exactly an outsider. But this latest upset does point to a long-term problem for the Democratic Party establishment, one that it won't be able to cure by suddenly getting on board with progressive causes like legalized weed or free college.

Young and urban Democrats—which is to say the lifeblood of the party—increasingly seem to be craving not just ideologically aggressive candidates who will stick it to Trump, but candidates who look and sound like them, too.

"The people closest to the pain should be closest to the power," Pressley, who agreed with her opponent on most issues, often told supporters. After her win, she cheered for "people who feel seen and heard for the first time in their lives."

You might expect Nancy Pelosi and Chuck Schumer—the resident grandparents who run the Democratic Party in the House and Senate, respectively—to be loving this. Women and people of color are responding to the Trump crisis and running for office and even winning primaries. Good stuff, right? Maybe not for their own grip on power. To be sure, both Pelosi and Schumer have long championed racial equality, LGBTQ rights, and abortion access, among other signature issues. They're also not traditional scions of the American ruling class—Pelosi is a Catholic woman who became the first female speaker of the House ever in 2007 and will forever be beloved by some liberals for pushing through healthcare reform, Dodd-Frank, and other major legislation early in the Obama years. Likewise, Schumer—a Brooklyn Jew as comfortable at the West Indian Day Parade as he is at a seder—would surely welcome more women of color into the Democratic Senate caucus.

But the two leaders are also champions of big-dollar (and corporate) fundraising who welcome ideological diversity as much as they do ethnic diversity in the party—that is, they want to win, and will do basically whatever it takes to do so. They also have a history of embracing Beltway thinking that is increasingly anathema to their party's base—thinking that could raise the ire of their party's new spokeswomen. Schumer's love affair with Wall Street, for instance, has caused him some trouble in a party that has embraced Elizabeth Warren and Bernie Sanders in recent years.

Pelosi, for her part, just signaled she wants to revive "pay-go" if and when Democrats re-take the majority, meaning any new public spending would have to be offset by tax increases or cuts elsewhere. In other words, she wants to stop blowing up the deficit, which might make sense if you're Nancy Pelosi talking to a donor at a fundraiser about Trump's insane tax cuts sending the deficit through the roof. It makes less sense if you want to actually make universal tuition-free college or Medicare-for-all happen in our lifetime.

Pelosi's plans to, as David Dayen put it, "handcuff" her own party's ambitions aren't going unchallenged. "The pay-go thing is an absurd idea now given the times and given what’s already been done to curry favor with corporate America," Raúl Grijalva, an Arizona congressman who heads up the heavily minority Congressional Progressive Caucus, told the Hill in June. Grijalva met with Ocasio-Cortez this summer after her win, and it's safe to say the increasingly unabashed lefty—and not all white—wing of the Democratic Party is riding high right now. They're not going to be deficit hawks—especially not after watching the Republicans pass a tax cut that will add an estimated $1.9 trillion to the debt over ten years

Something will come to a head here. The Democrats know they need moderates to win marginal congressional districts and Senate seats. But as Democratic voters send more diverse—and more progressive—politicians to Congress, what once were safe positions will continue to look cowardly. Whether it's downplaying impeachment talk or kneecapping a left-wing policy agenda by prioritizing the debt, Pelosi and her ilk are looking more and more out of step with the Left Wing of the Possible.

NY Times Op-Ed: “I Am Part of the Resistance Inside the Trump Administration”