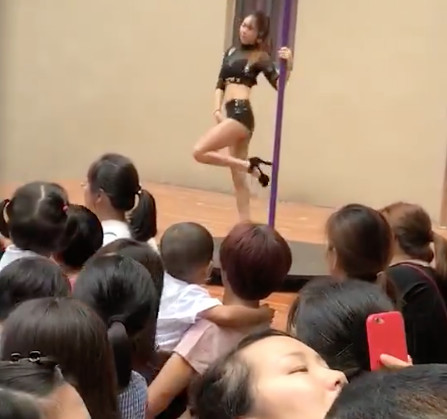 Kindergarten Welcomes Kids Back to School with a Professional Pole Dancer

The glorious, halcyon days of summer are over, which means kids the world over are filled with the soul-crushing dread that comes with having to head back to school—gone are the days of swimming with dolphins, summer camp, and weaponized beach umbrellas. In an effort to try to make the impending return a little less miserable, a school in China decided to throw its students a welcome back party, where a class full of three- to six-year-olds, along with their parents, were treated to, uh, this:

American writer Michael Standaert, who's based in China and sends his kids to Shenzhen's private Xinshahui kindergarten, tweeted about the display over the weekend, asking pointedly, "Who would think this is a good idea?" The answer, it turns out, is the school's principal, Lai Rong, who reportedly hired the woman because pole dancing is "international and good exercise."

And while the, uh, athletic exhibition made parents understandably pissed, Lai apparently got her wish because some of the kindergarteners seemed to enjoy the hell out of the dance: They bopped along while the woman went full Coyote Ugly onstage, transfixed by what was likely their first brush with twerking.

And while it might not be the most insane thing an educator has tried in the name of keeping students engaged, Lai is now facing calls for her termination from the local education bureau after parents complained. Still, she doesn't seem to think hiring a professional, scantily clad pole dancer to perform in front of literal toddlers is really all that big of a deal.

"Children are quite simple, they wouldn’t think such complicated thoughts about this," Lai told the New York Times. "They’d just think that it’s amazing for someone to be able to fly on a pole like that."

At the end of the day, Lai was just trying to help a few kids make it through the unbearably depressing task of starting school again with some good, old-fashioned entertainment. Sure, maybe she should've asked herself what the hell she thought would happen when she treated a bunch of kindergarteners to what's usually reserved for raucous bachelor parties, but at least she seems to have their interests—or at least the bitter hatred of boredom—at heart.

I Made Booze Out of My Own Spit and Drank It