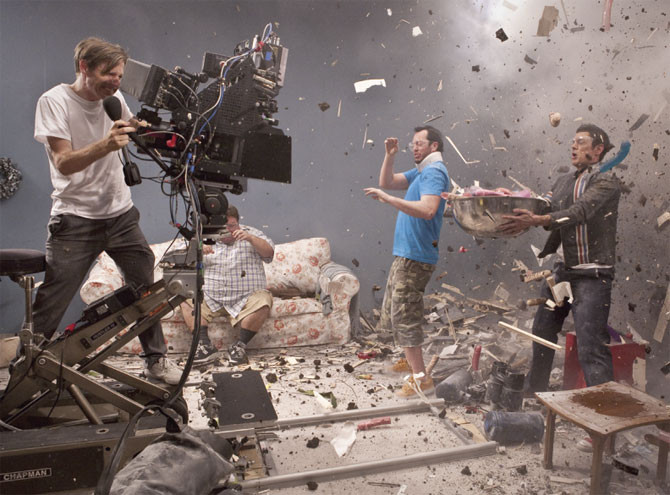 How ‘Jackass’ Spawned the Internet as We Know It

Every few decades, a piece of art comes along that changes everything. In the 15th century had Leonardo Da Vinci, the most iconic of Renaissance men and polymaths. In the 17th and 18th centuries, Gian Lorenzo Bernini fundamentally redesigned what was possible in sculpture and architecture. In the 1980’s, Andy Warhol changed the definition of art, pop culture, and culture itself. And at the dawn of the 21st century, the juggernaut television and movie series Jackass changed the world again.

When Jackass first hit the airwaves in 2000, my parents felt I was far too young to be allowed to watch MTV, much less their shows labelled with the dreaded “Parental Advisory” tag. Jackass was released to the elation and joy of the young, but most American parents considered the show to be some kind of hellmouth, capable of sucking their innocent children in and turning them into demons themselves. There were countless PTA meetings, local news specials, and newspaper columns decrying the phenomenon. Of course, this only added to the show’s siren song, and I always found some less-than-cunning ways to sneak an episode when my parents were distracted. And goddamn, I was immediately hooked.

If you don’t know the origins of the Jackass crew—it’s basically this: Jeff Tremaine, a magazine editor, wanted to put together a crew of lovably drunk and stupid goofballs to do some truly pointless dumb shit, for our amusement (and pitch it to TV studios). Since this wasn’t really the sort of thing for which you put out a craigslist ad, he began scouring the early internet, and came across a few groups of enthusiastic morons willing to shoulder the task. He found Bam Margera and his CKY crew getting up to no good in the Philadelphia suburbs (while listening to some truly awful music). And Erin McGhehey and Dave England, a pair of skateboarders/snowboarders with a penchant for losing teeth. The group came across Steve-O when he was working full time at a flea market in Florida as a clown. And of course, there was Johnny Knoxville, a humble writer for Big Brother skateboard magazine and star of the viral “taser, stun gun, pepper spray” video (if you haven’t seen it, the title pretty much gives you the general idea).

To call the early Jackass videos “low-tech” would be to speak in the language of extraordinary understatement. Most of their first season looks like the camera could, at any moment, easily pan left to reveal a child’s birthday party. Real '90s home movie vibes. The budget was minimal (if it existed at all), resulting in such classics as “What Would Happen If I Pushed My Friend Down Some Stairs In A Shopping Cart” and “What Would Happen If I Punched My Dad Several Hundred Times While He Tries To Poop." Its beauty lay in its divine simplicity—and through that to its genuine accessibility. Even when the first movie came out (an enormous undertaking both in budget and scope, compared to the show), the stunts seemed eminently “do-able," and we left the theatre eager to find a toilet store we could take a dump in or a car rental agency where we could procure a suitable demolition derby entrant.

In the early 2000s, Jackass seemed genuinely revolutionary to me and my friends. These guys—none of them particularly mature in their personal style or sense of humor—were out there actually making a living just fucking around, punching each other in the dicks for laughs. What could be more amazing? We had honestly never seen anything like it before. Sure, you could always send in that one shot of your dad falling ass first into a barbeque to America’s Funniest Home Videos and pray they accepted it, but beyond that, the concept of making content outside of the bounds of the legacy media seemed pretty unrealistic. The idea that it could be made at home using your parent’s Sony Handycam—and reach such huge audiences—well that was something else altogether.

This appeal even caused the show’s producers to add a stern “do not try this at home” warning, but of course we all did. How could we not? We had all the tools laid plainly at our feet.

Smash cut to 2018, where this kind of story seems relatively old-hat. All of the new popular rappers come from Soundcloud, outside the major labels. That Bhad Bhabie girl made millions of dollars last year after her career was launched from a viral appearance on Dr. Phil. It’s Always Sunny in Philadelphia was started with two roommates, a small digital camera, and 85 dollars. And of course, let us not forget the grand-poobah of homegrown celebrities: the YouTuber (I might actually be mad at the Jackass boys for spawning this one, to be honest). Social media itself trailed Jackass by years, joyfully capitalizing on the user-generated-content wave as it rose behind these brave pioneers. Someone getting famous from low-budget internet content seems almost passe these days, but it’s important to remember that less than two decades ago, it was downright unheard of.

Somewhat recently I was the guest on a podcast when the host casually compared Jake Paul to the heroes of the Jackass crew. Naturally, I felt compelled to berate him for even daring to put “Jackass” and “Jake Paul” in the same sentence, so I hollered at the guy a bit (whatever it was justified). But the reality is, the host was kinda right. While I have more respect for Johnny Knoxville than I have for the troops, the castle of success the Paul brothers live in was built—painstakingly and brick-by-brick—by the boys of Dickhouse Films. Honestly, if you are a viral star in the modern era, you should be forced to renounce your religion and just pray to the stars of Jackass. They are your gods now.

For all of these reasons, the release of Jackass was a tremendous watershed moment in media and entertainment. And much like the work of other tortured geniuses such as Galileo or Van Gogh, it was generally unappreciated in it’s time (especially by the media). Despite all of the influence and pioneering, many folks still consider the Jackass canon to be a fun but ultimately pointless exercise in dumbassery—and yet it is these people who are the true dumbasses. Jackass 3 was on exhibition at the Museum of Modern Art in New York. Jackass was a cultural touchstone, a phenomenon that perfectly encapsulates the tectonic shifts in media that were awaiting our society. Content itself was broken down in it’s broiling furnace and reshaped with the thunderous blows of foot hitting nuts. And also it just fucking ruled.