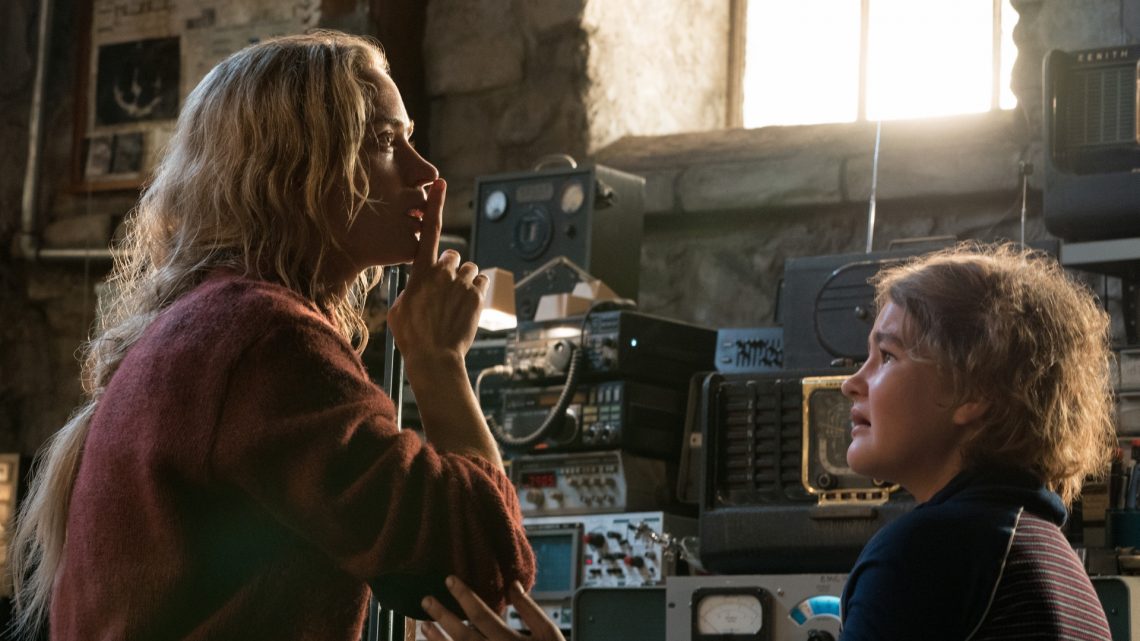 I Watched ‘A Quiet Place’ in a Soundproof Room, 0/10 Would Not Recommend

Silence is supposed to be very peaceful, but no, no. The room I'm in is an anechoic chamber, which is a scientifically silent place: fiberglass wedges adorn every inch of the walls like spikes, a raised mesh floor with a single lethal injection-looking chair sits in the middle of the room, and beneath that is a ball pit-like drop into more wedges. The wedges waffle high frequency sound and bounce low frequency sounds between each other in a way I do not fully understand, despite very careful, slow-voiced explanations from patient and intelligent experts around me, but the end result is this: Noise can barely exist here, the walls are designed to negate sound down to nothing, and what that means in practice is that not only is the anechoic chamber completely silent, like a recording booth might be, but it means it is also completely echoless, which is what is disconcerting.

I'm supposed to spend ten minutes in here without losing my mind. "Don't touch the walls," a chamber tech tells me, as he inches the door closed on me and locks it. "The wedges are fiberglass, it’ll get in your skin and eyes." I do not touch the walls. I spend the next 20 minutes incredibly stressed that I might touch the walls.

A Quiet Place is an incredibly intelligent film that is essentially impossible to watch anywhere where people are. (The premise is simple: Earth has been haunted by monstrous blind creatures with acutely sensitive ears who are attracted to any sudden noise above the volume of a whisper; everyone is mostly dead; a mother [Emily Blunt] and father [Jim Krasinski] impossibly try to have a baby in the middle of this).

When it was released in theaters, social media was alight with stories about how the film was good ("Enjoyed how it made me jump out of my chair so much I shat myself! Fully shat! Thanks!"), yes, but also how irritating it was to watch with other people ("Good of the guy who sucked a large Coke right down to the ice to then dove into an enormous popcorn, then a sandwich he had bought from home inexplicably wrapped in wax paper, to come! Good!"). You only realize, when silence is an important plot point, that the animals around you in a movie theater are mostly gurgling, loud-whispering, phone-on-silent, dropping-a-whole-thing-of-jelly-beans-on-a-hard-floor idiots who don’t know how to do fucking anything, fucking anything. I hate people.

Anyway. we’re back in the silent room. I’m told what to expect from being alone in absolute silence: No, I'm told, I won't go immediately berserk and insane; but yes, I will become hypersensitive to background sounds, which is why I spend the first couple of minutes scratching my own crackly stubble, or smacking my lips, or listening to the saliva slosh around in my own mouth, or breathing. Sit and focus long enough in an anechoic chamber and you can hear the dull thud of your heartbeat, a-bum a-bum a-bum, and some people claim to hear a higher, jangling sound that has been interpreted as "the sound of your own nervous system, pulsing and screaming," but others dismiss that as nonsense.

What is true is that, in the complete absence of noise, your ears, primed to listen to something, start to act up: For the first few minutes, I imagined a sort of high, piercing, wall-of-sound type arrangement around me, something that made my entire head cringe (the closest analogy I could come up with is: You know when you close your eyes, but put your face next to a wall? Like when you’re in bed, or something? And you just sort of… know the wall is there? Like that, but with silence). I explain this to Professor John Drever, Professor of Acoustic Ecology and Sound Art at Goldsmiths University after the insanity room; I ask him if this sensation is normal. "Oh, no," he says, cheerily. "No, no no no no. No. That’s very abnormal, actually." Good.

"Why do anechoic chambers exist?" is a question you quite often find yourself asking when locked for ten minutes in an anechoic chamber, and the answer isn’t 100 percent straightforward.

"Silent rooms are acoustic labs," John explains. "'Anechoic' means there's no resonance or reverberation—it means if you clap your hands in there, there’ll be no response, which is why you found it to be quite a horrible space." Leave recording equipment in an empty chamber and the level of sound in there will dip below zero decibels. Because of the lack of reverb or feedback, the room is spiritually similar to being in an open field, clapping into the open sky, but crammed down into an enclosed space.

Musicians use the labs to record horrible, ugly versions of notes that can be a useful starting point for compositions, and sound researchers like Drever use the rooms to, say, calculate the loudness of potential hand dryers and how they might sound in reverb-high public bathrooms. Drever even did research into poltergeists in there (recording raw noises and playing them back through building materials such as brick and wood to synthesize the spooky "unnatural envelope" of sounds associated with noisy ghosts). But essentially, these rooms are not designed to be sat in very quietly for ten minutes, alight with the sound of your own thoughts.

I've often secretly thought I'd do quite well in a prison or solitary confinement situation (if you have never secretly fantasized about going to prison, and somehow, against the odds, being really good at prison, skip this bit). In the fantasy, I'm in prison for some soft-level crime—fraud, or something, or for downloading music and movies illegally too many times—and the genuinely hard guys in there take a bizarre shine to me despite our many differences. I use my great height to give some guy a leg-up so he can escape, something like that. I use my skillset as a writer to help them pen horny letters to their girlfriends at home. I win them over, is what I’m saying, and I’m initiated into a gang for protection. I’m not a prison capo, exactly—I mean, I’m not going to win a fight against a kid with withdrawal symptom energy and a toothbrush sharpened into a shiv—but I do alright. That’s until they throw me in solitary, where in previous versions of this fantasy I've taken the alone time to catch up on sleep and start a novel in my head, but now after being exposed to the reality of an anechoic chamber I know I would go mad, wildly mad, within an hour of my own company.

Anyway, the next time I watched A Quiet Place it was in the exact inverse of an anechoic chamber: in the living room of my apartment, next to a roaring main road, streetlamp light blaring in. I'll be watching with a group who occasionally interrupted for snacks, or asks too many questions ("Why are they being quiet?").

If A Quiet Place teaches us anything, it's that watching a movie is so rarely a perfect experience, and when one of the main characters in a film is "the concept of silence," it's basically an impossible challenge. Does retreating to an insanity room to watch it in perfect quiet help with that? No, not really. It just makes you listen to your own saliva a lot and think about prison.

Productivity Up 2.9% – Real Hourly Earnings Down: Thank You Fed!