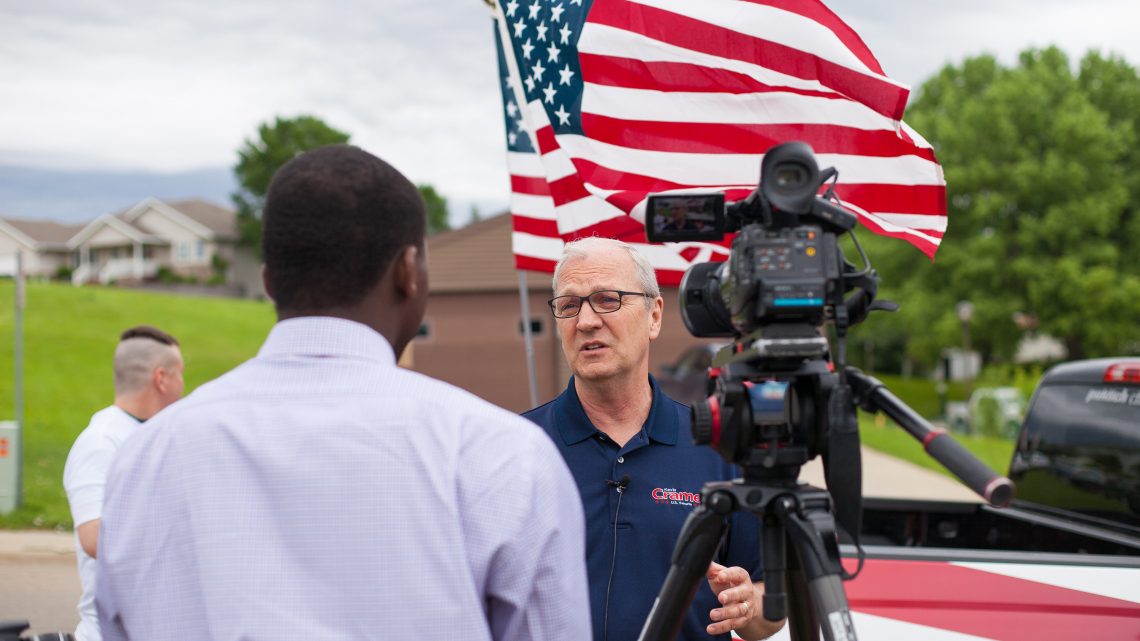 Congressman Kevin Cramer, a folksy, white-haired Republican running for US Senate, was waiting in cargo shorts and a polo for a small-town North Dakota parade to begin. Standing next to a pickup truck and a knot of campaign volunteers—all clad in the same “Cramer Crew” T-shirt—he told them he couldn’t do it without them.

“You can screw it up for yourself,” he said, “but you can’t win it by yourself.”

Storm clouds were passing, and the sun was about to shine. Moments later, the parade stepped off through Valley City, a town of about 6,500. Cramer and company tossed the crowd Skittles and Starbursts out of plastic buckets. Speakers on the pickup blared country. To an outsider, the production might hold the local charm of a rural state representative’s contest.

But it represents today’s battle in North Dakota's hard-fought campaign for the Senate, a race that could determine which party controls the entire chamber. The Senate is currently split 51–49, and every seat on the ballot this November could be the one that changes everything. North Dakota’s race is an unusually close contest between two of the state’s heavyweights: Cramer, its lone congressman, and incumbent Democratic Senator Heidi Heitkamp. It’s poised to swing money and attention like a fist into one of the quietest corners of America, and in a state that prides itself on polite, Midwestern gentility, observers are already bracing for an influx of outside cash and acrimony.

“It’s going to be fucking nasty. There’s going to be $50 million here,” said Jim Fuglie, a former director of the state’s Democratic Party affiliate turned blogger. Political ads will air so frequently, he joked, that “you won’t see any medicine ads on the six o’clock news anymore.”

Fuglie’s prediction might be an unremarkable sum for other Senate races, but ad money goes further in the Peace Garden State, population 755,000—not much bigger, by headcount, than the city of Seattle. It’s a sprawling state, full of prairie and foothills and oil fields, but so sparsely populated that it can have a small-town feel: Bismarck residents might pass the attorney general in the grocery store.

A close ally of Donald Trump, Cramer brags that he’s running at the encouragement of the president, who visited Fargo late last month. He voted to repeal and replace the Affordable Care Act and supported the GOP’s tax overhaul. Heitkamp has bucked both those policies, but has voted with Trump elsewhere, including on Gina Haspel’s appointment to lead the CIA; she even cut an ad touting her Trump-friendly record. It’s an unsurprising move in a state that supported Trump over Hillary Clinton by a margin of more than two to one—and where Heitkamp was elected in 2012 by less than 1 percent of the vote.

North Dakotans are familiar with hardball politics, having watched a tough GOP gubernatorial primary two years ago and the 2012 race that first sent Heitkamp to Washington. But this race is already showing the signs of a hard-fought contest, and as Mike McFeely, a columnist for the Fargo Forum, put it in February: “Buckle up, North Dakota. The political campaign of your life is about to begin.”

The race began in earnest in February, when Cramer—after briefly saying he wouldn’t run—reversed course and jumped in. Besides the standard, constant messaging around both candidates and their track records, the campaign has already seen the flashes of fighting that portend a big race. The state’s Democratic Party affiliate has criticized Cramer’s payments to himself and family members with campaign funds—like for his wife’s work as campaign manager—which they call unethical. In one of the odder exchanges of this past year, they circulated a Valentine’s Day poem about it: “Roses are red, nepotism is icky; Cramer paying his family is morally sticky.” On Facebook, this message came with an image of Cramer against a pink background with white hearts. (The Democratic candidate for attorney general has gone so far as to accuse Cramer of corruption for his campaign finances, including some of this year’s high-mileage reimbursements to himself and his wife, though an AP fact check rates those payments as reasonable.) Cramer has denied wrongdoing.

“I think that this is likely to be the most expensive race, per vote, in American history."

The National Republican Senate Committee, for its part, has hammered Heitkamp on an apparent moment of levity with Senate Minority Leader Chuck Schumer after she voted against an abortion ban. After the Senate Leadership Fund questioned her foreign policy judgement in an ad featuring ailing Syrian children, Heitkamp took to Twitter: “Using poisoned, dead Syrian children in a political attack ad is disgusting, shameful and downright wrong," she wrote.

In early May, Heitkamp’s brother—a Fargo radio host—sent a sneering tweet about the divorce of one of the senator’s fiercest media critics, an exchange Heitkamp dismissed as talk-show chatter irrelevant to the campaign. And after Heitkamp’s mother died, the state GOP was criticized for promoting the senator’s unfavorable polling numbers on the day of the funeral, a move the party attributed to a social media scheduling error.

Cramer and Heitkamp have shared moments of mutual respect. Notably, days before Cramer’s adult adopted son died in March, the congressman said Heitkamp privately offered her sympathy. But few observers expect amity throughout the race—especially as November nears and as outside groups funnel resources into the state.

Heidi Heitkamp on the campaign trail.

“I think that this is likely to be the most expensive race, per vote, in American history,” said Mike Jacobs, ex-publisher of the Grand Forks Herald, one of the state’s largest newspapers (and where I was previously on staff). It’s something he’d also told me earlier this year. “Because there are not very many voters, and both sides have, you know, enormous financial resources.”

State records put turnout in the 2012 election at only about 326,000. In the 2014 midterms, the number fell to about 255,000. By Cramer’s estimate, roughly that same number will hit the polls again this year, though he points out that maybe only 50,000 of them will be easily persuadable voters, underscoring just how many resources—and how much of the country’s future—will be tied up in the ballots of so few.

Not long after the parade ended, Cramer walked through the center of Valley City, where a car show sat not far from a bustling midway of corn dogs, steak sandwiches, and lemonade. The first food trailer he stopped at was manned by a confirmation student he’d taught in his younger days.

“When I speak to groups in New York, or California, or Texas or Washington DC (and say) that we have a grand total of about 320,000 (or) 310,000 voters on a big presidential year, it blows them away,” Cramer said. “And they said, well, you could know every one of them. And I said, I feel like I do.”

Kevin Cramer on the campaign trail.

The day before, Heitkamp sat down on a farm near Grand Forks, about two hours’ drive away. Wearing jeans and settling in for a round-table talk in a barn, she cracked wise with the farmers gathered, cows mooing outside the open door.

“You young farmers, you need to learn how to bitch a little bit more,” she joked to one of them, drawing loud laughter. “You’ve gotta learn not to say, ‘It’s all right.’”

The tariffs are perhaps the most obvious way that Trump has cast a shadow over the race. The state had had an overwhelming preference for Republicans in recent years, but retaliatory tariffs threaten the livelihoods of local farmers and the state’s small manufacturing sector. Cramer, who is often in lockstep with the president, concedes that Trump is approaching “treacherous territory” with the way he’s wielded trade policy. Though he has professed faith in the president’s negotiating skills, he’s cautious.

“I'm all for trying to negotiate better trade deals,” Cramer said last month. “The use of tariffs in that—as a tool in that—concerns me, especially when they go from being a tool to being a weapon.”

But if Trump’s policy moves have influenced the race, his personal behavior—including accusations of sexual misconduct—is making less of a mark in a state he won handily. Heitkamp, shortly after meeting with farmers, crossed Grand Forks to address a group of young women at a summer leadership event. She movingly told her own story of growing up in a big, working-class family before finding her way to DC, and encouraged young women to look beyond their doubts to follow their ambitions. Later, when pressed on how she’d explain her relationship with Trump to one of those girls—especially in light of those accusations—she emphasized pragmatism.

“What I would say is that Donald Trump is the president of the United States—that I believe my job is to work with whoever is in that role to advance the betterment of the people of my state,” she said. “I don't have to agree with his behavior, but I think, at the end of the day this is the person who, if I'm going to get things done, we have to work with him.”

Cramer has spoken publicly on similar matters. He mentioned the Access Hollywood tape in an August interview last year, rejecting Trump’s 2005 “grab ‘em by the pussy” remarks but insisting that the president has since changed.

“As repugnant as his exploits in the past were, and are—I mean, it's not like Hillary Clinton is an Eagle Scout,” Cramer said, pivoting to praise Trump’s deregulatory agenda.

Heitkamp and Cramer’s views on other topics are more conventionally partisan. As child separations at the southern border roiled headlines around the country last month, Cramer called on Democrats to help pass “border security reform,” claiming that “Democrats continue to politicize this issue instead of working with Republicans.” Meanwhile, Heitkamp backed a bill supported by Senate Democrats that would end family separations.

Likewise, Cramer is a big believer in the GOP tax bill, citing a study that gives North Dakota the biggest average benefit on their federal income taxes; Heitkamp sees a deficit-driving policy that aids the rich. Cramer—like Trump—laments the GOP was unable to overhaul the ACA; Heitkamp views Cramer’s solutions as unhelpful. The winner of the race will perhaps be the Senate’s deciding vote as issues as big or bigger loom in 2019.

No matter who wins, this year’s race will rank among the highest-profile contests in North Dakota’s history. But the stakes were also high in 2012, when Democratic Senator Kent Conrad retired from the seat, opening a path for Heitkamp to narrowly defeat Rick Berg, then the state’s Republican congressman, who has since become chairman of the state GOP.

I asked Berg how this year is different. He joked the GOP candidate is better this cycle, but he said this year features two politicians who have already been sparring—albeit from different chambers—over the same bills to the same electorate for five and a half years. He warned against getting bogged in “side issues,” though, an apparent reference to Cramer’s reported frustration that Trump is fond of Heitkamp. Cramer’s remarks have gotten him negative press before, like when he defended then-White House Press Secretary Sean Spicer over a fraught comparison between Syrian strongman Bashar al-Assad and Hitler.

The race, with months of fighting to go, will play out before the same meager audience it’s always had. The state is still small enough that a North Dakotan can walk into the state Capitol during session and meet any legislator they like, Berg said.

McFeely, like many others, joked in an interview that North Dakota is just a giant small town. But don’t let it fool you; it’s the kind of place where a politician would happily plant a “shiv in someone’s ribs,” he said. Even if it’s in a polite, Midwestern kind of way.

“You’re going to have a smile on your face when you do it, gosh darn it,” he said.

Putting the Cart Before the Horse: Gold Hype

Tesla Begs Suppliers for Cash Back on Prior Orders: WTF?