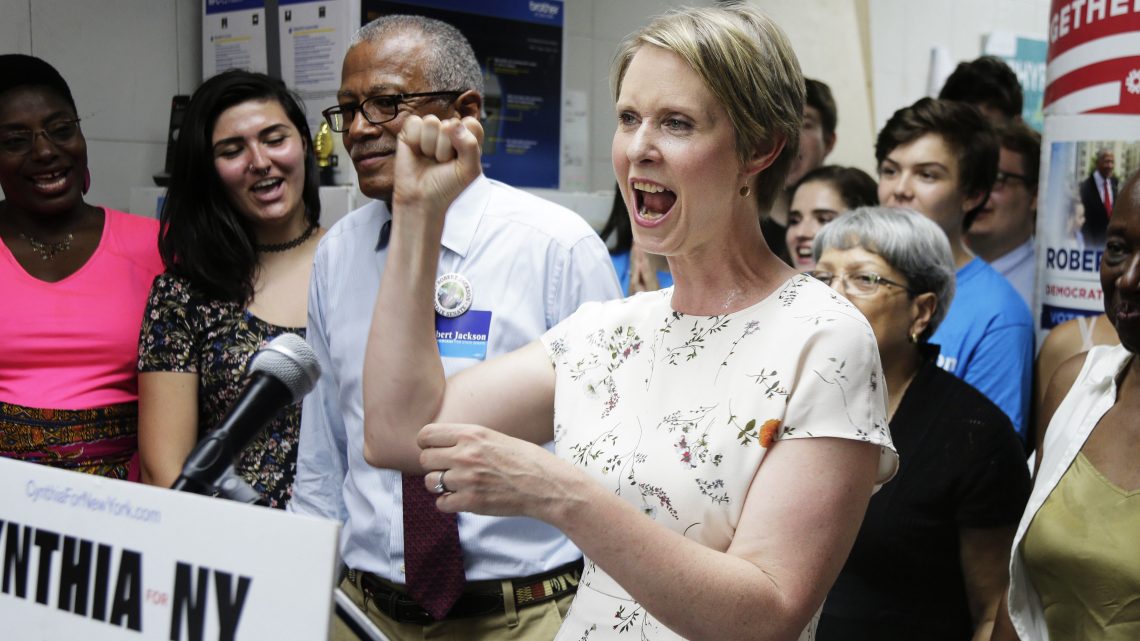 When Cynthia Nixon, the Sex and the City actress turned progressive warrior, announced she'd challenged New York Governor Andrew Cuomo in the Democratic primaries, it turned his reelection from a foregone conclusion into one of the most heated confrontations between leftists and centrists in the Democratic Party. Nixon's policy proposals—marijuana legalization, fixing Cuomo's broken MTA, rent justice, and abolishing ICE—seem tailor-made to attract young progressives who view figures like Cuomo as corrupt obstacles to necessary change.

Nixon has loudly rallied against the systemic racism of the criminal justice system and the corporate sponsorship of major politicians, and identifies as a "democratic socialist." She's received support from former Obama officials, her Sex and the City costars, and the actors Lena Dunham and Rosie O'Donnell. But those endorsements don't explain why Nixon's candidacy has lit local leftists on fire. Why is the first-time candidate so beloved?

As leftist activist and writer (and VICE contributor) Sean McElwee put it, "It's refreshing to be pandered to."

"The future is a mobilized progressive base not the mushy mythical moderate. Nixon's fundraising numbers show the power of this platform to energize the base," McElwee explained. "Her campaign is an important part of contesting what it means to be progressive. You can't be progressive if you're not fighting for gender, race and economic equality and you certainly can't be a progressive if you're gerrymandering your state to empower Republicans in the state senate."

(That last point relates to a common critique of Cuomo, which is that under his watch the New York State Senate has been controlled by Republicans because the "Independent Democratic Caucus" has backed GOP leadership. In April, as Nixon pressured Cuomo on the issue, the governor and IDC members announced it would disband.)

The leftist fanfare surrounding Nixon makes sense. Never having held political office before, her political platform has a bold energy that more centrist (and experienced) Democrats like Cuomo lack. She has the authenticity of Bernie Sanders with a feminine, Hollywood-flavored twist. She says the things so many of us wish politicians would say. She's not just pro-choice, she talks about her mother's illegal abortion when defending Roe v. Wade. She's not just denouncing the broken subway system, she's proposing a millionaire's tax to pay to fix it. So many Democrats are encumbered—in a way many conservatives usually aren't—to attach qualifications and compromises every time they throw out a new policy. Nixon feels no such need.

That might have something to do with who is paying for her campaign. While Cuomo has previously received thousands of dollars from the notoriously conservative Koch brothers, many of Nixon's contributions are small sums from individuals, a la Bernie Sanders's 2016 campaign. She encouraged supporters to donate $4.20 to her campaign after she came out in favor of marijuana legalization, and since then 1,631 chillers (including myself) have contributed that amount. Many local and national progressive groups have also hopped aboard the Nixon train. Justice Democrats recently endorsed her candidacy, and the Democratic Socialists of America are currently deciding whether to do the same.

"The True Blue NY Grassroots Coalition is supporting many first time candidates for office," Mia Pearlman, the co-leader of the organization, told me in an email. "Like Cynthia Nixon, they don’t always look or sound like typical politicians, and that’s part of their appeal. What they share is moral clarity, dedication to a progressive policy agenda, and the ability to inspire voters who are turned off by machine candidates like Andrew Cuomo. New Yorkers are tired of politicians who care more about their careers than their constituents."

It's still unclear whether all this enthusiasm, which is concentrated in New York City, can bring Nixon a statewide victory on September 13. According to a recent Quinnipiac poll, Cuomo is leading by 36 points among registered voters. Shane Goldmacher, the New York Times chief metro political correspondent, hypothesized on Twitter that Nixon is struggling in the polls because 77 percent of Democrats "said they would prefer 'experience' compared to only 13 percent who want someone 'new to politics' as governor."

But such pronouncements aren't likely to dampen the joy Nixon's supporters feel. They're energized, and they're clearly having fun with it:

And to be clear, Nixon is not totally "new to politics." As activist Susan Kang, who volunteered on Alexandria Ocasio-Cortez's campaign and co-founded NoIDCNY, told me, "Due to her many years of grassroots education activism, Cynthia Nixon has developed both an understanding of the workings of Albany and a bold progressive sensibility. Unlike Cuomo, she can be trusted to advance the interests of working New Yorkers, immigrants, students, women, the LBGT community, and many more."

That longtime activist work has given her connections to lots of left-wing figures who seem thrilled to endorse her. "As a mother of eight, grandmother and longtime education activist, I have seen up close Cynthia's determination and commitment to public education, and her candidacy for governor and schools not jails platform are a reflection of that work," Zakiyah Ansari, the advocacy director for the Alliance for Quality Education, an organization Nixon closely worked with prior to her campaign, told me. "For years [working] as our spokesperson, Cynthia has shown she is willing to fight for educational equity and has been working to elevate the voices and demands of Black and Brown students and parents like myself that are too often overlooked by officials and in the media."

Indivisible, a grassroots organization that seeks to stop the Trump agenda and elect progressives, has endorsed Nixon. "She's a dynamic candidate, bringing needed energy and attention to the state primary," Liat Olenick, co-president of Indivisible Brooklyn, explained. "There is definitely excitement in Brooklyn about her."