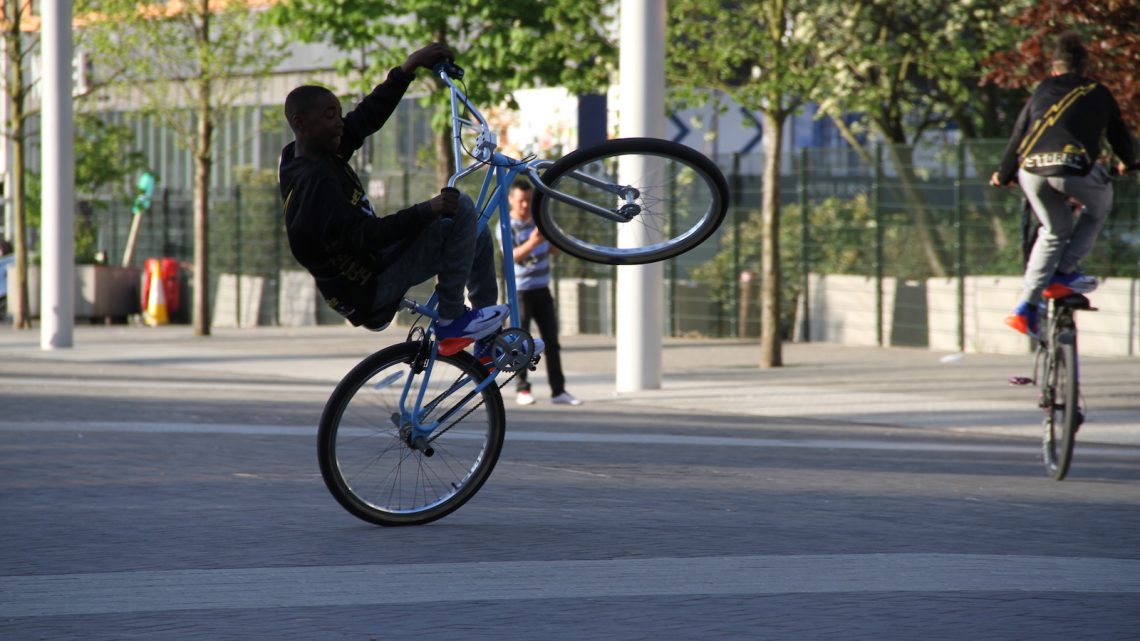 Inside London’s Bike Crews Keeping Kids Out of Crime

On a cloudy afternoon in early April, thousands of teenage boys cycled through central London. Many of them were hoods-up or had their faces covered with makeshift masks. Some of them rode Boris bikes, others BMXs, others expensive-looking mountain bikes with chunky tires. All of them alternated between pulling wheelies and riding two wheels down. Some—mid-wheelie—clambered up and over their bikes, performing acrobatic maneuvers as they sped through traffic.

The event—organized by BikeStormz, a UK-wide community of cyclists—was titled #BikesUpKnivesDown. The intention, as you can probably guess from the name, was to protest the huge spike in street violence that this year has claimed over 50 lives and injured over 1,000 in London alone.

Beyond the glitzy developers' hoardings and £600,000 [$701,062] studio apartments, London is not a wealthy city. A third of children grow up in poverty, and youth workers and practitioners have warned that this environment—plus a severe lack of youth services, thanks to a crippling campaign of government austerity—can push some young people into crime.

It's this scenario that BikeStormz wants to help young people avoid, encouraging them to get out and cycling, rather than carrying knives and getting wrapped up in violence.

Photo by the author

If you live in London, at some point in the last year or so, you've probably come across large groups of kids speeding through rush hour traffic, pulling wheelies and irritating cab drivers. The sport has rapidly increased in popularity over the last few years, and as it's continued to grow, the community has come out in support of various causes, including standing with Grenfell immediately after the fire. The next major protest against street violence is planned for August, and organizers hope to attract upward of 6,000 people.

At BikeStormz's event in April, MAC—the organization's founder—explained why he is so invested in combatting this recent wave of violence.

"We're really proud of our recent campaign," he said. "It's anti-crime, anti-violence, anti-zip code war. It's a response to the rising violence in London, but also the violence that's happened in the past that didn't get as much attention. I had a colorful background. I changed things around in my life in a big way. Certain things I went through, I don't want these kids to go through; certain things I saw around me, I don't want them to see. It's about keeping them away completely from all this rubbish as much as we can, and keeping them busy doing something they love."

MAC didn't give many details about his past, but it's clear it's not something he wants to revisit—nor are his experiences ones he wants to see the current generation of teenagers go through; he'd rather they stayed busy with BikeStormz.

But what exactly is BikeStormz?

"BikeStormz is the UK's biggest ride out community," MAC explained. "It's been going for about four years. Basically, the kids come out, enjoy themselves, and forget about all the troubles they're going through in life. They have a great day and get a chance to showcase their talents and skills that they've been practicing throughout the year."

And what exactly is a ride out?

"It's when a load of people get together—mostly kids—on their bicycles, and they come out in numbers, ride through their city, ride through their local area, and just have fun. I'd say there are at least 10,000 people in the UK who do this regularly."

Street Elitez. Photo by the author

Tracking MAC down for an interview took the whole day; he was cycling from area to area, picking up different kids and fixing and tweaking their bikes when necessary. After starting out at Tower Bridge, I eventually found him next to Wembley Stadium, where he was with the Street Elitez—some of the most talented riders in the country.

I asked one of the Street Elitez guys, Montana, about what the scene means to him. "It's had a big impact in my life because if I wasn't riding, I don't know what I'd be doing," he said. "Maybe I'd be in the street doing dumb stuff. It keeps us busy and I love the community—I've been a part of it for nearly three years now."

Generally, passers-by seemed impressed, constantly stopping to take photos and videos. But the public haven't always been so keen to see these groups; the community has had its share of bad press in the past, with police regularly calling them a nuisance. But in an apparent U-turn, the scene is now officially supported by the police force, and many officers ride alongside the kids during their protest ride outs. The mayor's office has also given its official backing and support.

"We may have got bad press in the past because the kids haven't all always had perfect attitudes," said MAC. "That's what BikeStormz is about; it's about building the correct attitude to go forward with. The kids have been working hard on it over the last few years."

This hard work has paid off; a few months ago, BikeStormz held its first annual awards ceremony in City Hall.

"Now, we've got official events and awards, huge followings on social media, sponsorships from companies like Nike, Nandos, and GoPro, and we'll keep growing in different ways," said MAC. "The goal is to make it an official sport, so these kids can have a future. They can come off the streets and do something that will earn them some money—just like skateboarders, BMXers, and others."

Mac (right) watching over practice. Photo by the author

Sami, a 13-year-old rider who is part of In Da Air—another group of riders in London—has been part of the bike community for only a year, but has already managed to amass a large Instagram following.

"I was scrolling though Instagram one time, and something came up that was recommended for me—it was a person wheelieing on their bike, doing tricks and all of that," he told me. "I thought: I really wanna be like him. So I went to the park with one of my friends who had a mountain bike and I tried wheelieing. After a few minutes, I managed to put the wheel in the air, and I was so happy—so I asked my mom if she could buy me a mountain bike. From there, it all started. I knew where to go because of social media. I saw all about the ride outs from BikeStormz posting on Instagram, and from there, I got to know a lot of people and made some really good friends."

Now, Sami picks up 20 or so followers every day, but he's hoping his hobby will eventually lead to something more than a sizable social media following.

"I hope I can make money doing this," he told me. "I hope I get to travel around the world and ride in loads of different places. The only problem is we don't have places to go. Soccer players have stadiums and gymnasts have gymnasiums, but us bikers have to make do with the roads—but MAC is working hard to fix that."

While Sami and others doing wheelies isn't going to single-handedly solve the complex issues of violence in London and the UK at large, this scene is creating new avenues for these kids to explore. By taking this culture from the underground and pushing it into the mainstream, these stunt-riding kids hope to turn the culture from a hobby they love into a career, providing opportunities and keeping them away from the negative influences of the city.

Housing Bubble and Everything Bubble in One Simple Picture