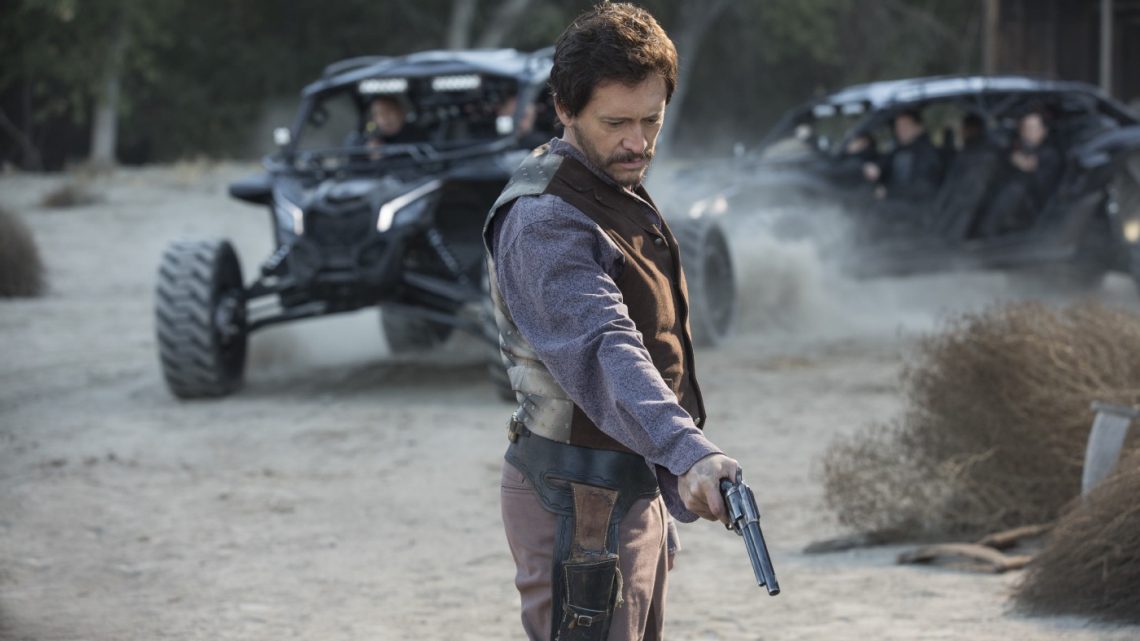 A Definitive Ranking of ‘Westworld’s Worst Side Characters

Watching Westworld can be a bit of a slog, but the gunfights, A-grade monologues, and indiscriminate nudity make it way more fun than just reading George Berkeley and Nick Bostrom's philosophical tomes. Last night's season two finale, "The Passenger," scrambled TV Twitter's collective central processing units. But the heady concepts hidden between all that pulp aren't the only challenges facing a potential viewer of HBO's flagship series.

Showrunners Lisa Joy and Jonathan Nolan have done a wonderful job of constructing an elaborate and believable world that forces conversations about technology, corporate power, human nature, and [rips bong] the essence of reality. But most of the characters are so unlikeable that following the series can be borderline masochistic.

The main squad—The Man in Black, Dolores, Maeve, and Bernard—often make dubious decisions and get into situations that make viewers grate their teeth. But they're also the only characters who triumph in any meaningful way. Everything they do is so steeped in religious and literary symbolism, plus convoluted, time-hopping plot twists, that it seems way to early judge them. With Nolan and Joy in no hurry to pump out season three, we'll have plenty of time to think about that. We'll also have plenty of time to think about the shows many, many (too many?) side characters. Some, like Zahn McClarnon's riveting performance as Akecheta, were a joy to watch. But many are not. Here now, a definitive ranking of Westworld's worst side characters. Warning: This post contains spoilers for the season two finale of Westworld.

A lot of the hosts are infuriating because of how unevenly the "reveries," which allow them to access memories from previous lives, affect their behavior. Dolores is powerful because she's fully awake, able to access all of her memories and Wyatt's. No one knows how much she knows but her. However, while The Man in Black is weirdly obsessed with dragging him all over the desert, Lawrence doesn't seem to remember how often he's been tortured, used him for blood transfusion, and watched his family murdered by his traveling companion. Lawrence follows him into battle multiple times, only recalling his own trauma after a mental knock on the noggin from Maeve.

And he didn't even kill the fucker!

Depending on your interpretation of that final scene in the park, Stubbs is either an incredibly incompetent head of security with a chip on his shoulder or a sophisticated host who successfully infiltrated the Delos militia. Either way, he's an All-American whiner who grumbles every time he doesn't get his way. The bad humans may be pricks, but they have a point: the entire park erupted into murderous chaos under his watch. Even in service of his deep cover operation, his griping grates on the nerves.

His final scene is the worst, though. Smugly communicating with Dolores-as-Charlotte Hale in a thinly-veiled admission that he, too, has been a host all along was stupid and dangerous.

Like father like daughter. Emily thought she was better than her father, but she was out in the same wilderness as him in some sort of misguided attempt to get revenge for being a shitty dad. The moment he started questioning whether she was a host, she should have seen crazy for what it was and gotten the hell out of dodge. It was fucked when William shot her, but it was so stupid to keep poking an obviously mentally ill person with such a history of violence.

Unlike many other side characters on this list, Emily isn't annoying. She's dynamite to watch deliver scathing lines, and has some legitimate life struggles, even if she did grow up as an heiress with a silver spoon in her mouth and all the opportunities in the world. But in the end it was frustrating to see her not get out of the way of William's violent delights, and violent ends?

We want to punch this brash industrialist's face—which looks nothing like his long-established son Logan's—every time it shows up on the screen. The moment we're supposed to feel the most sympathy for him, when we realize his photocopied soul has been caught in a hellish loop of insanity for years, we cheered. He treats everyone in his life like a disposable spork, to be used and then tossed aside. Fuck eating the rich, let's just let them tear themselves to shreds.

Anthony Hopkins rules, and his masterful acting is one of Westworld's greatest strengths. That said, season two has tried to paint him as some sort of benevolent god to the hosts, who programmed a Jenga tower of events to topple down and free his beautiful creations. This interpretation conveniently leaves out the fact that he let customers torture the hosts for 30 years, encouraged by Westworld's marketing. "The only limit here is your imagination," Angela tells a young William in season one.

Furthermore, the way he wormed his way into Bernard's head this season seems to undermine his whole premise about hosts being the only species capable of true free will and self-improvement. It doesn't seem fair that he got to pleasantly bid Bernard farewell on a beach with an elevated version of Jack Sparrow's "Bring me that horizon" speech .

We get it! Delos is an evil corporation that puts money and power above moral scruples! Why does Hale have to beat us over the head with how unethical she is? Her job security depends on not viewing the hosts as legitimate, sentient beings, but does she have to compare the reprogrammed Clementine to a fucking horseman of the apocalypse? Judging by her willingness to murder natural born humans in cold blood as well, she clearly possesses the moral flexibility she tut-tuts Elsie for lacking. But she seems like Delos sent her there solely to prove that humans are evil and the hosts should kill us all.

Lest we forget, Sylvester is the guy who started a cottage industry of letting Westworld employees fuck the bodies of hosts while they were offline. Maeve kept him alive simply as a tool for fixing up her fallen comrades and controlled him solely through fear. At what point did he become a card-carrying member of the revolution? He saw a bunch of hosts in Shogunworld killing each other, just as Lee Sizemore wrote them to, and he suddenly decides they're worth protecting?

The other technician was always a little bit more sympathetic to the host's cause than Sylvester, but even Lutz's change in perspective doesn't quite add up. Sure, once you admit the hosts are real people, it's hard to turn against them. But they're murdering real humans left and right. It's self-defense, but with such philosophical gray area, we're not sure how any of the humans embedded among the hosts could be so zealous in fighting for them.

Talk about awkward family reunions! Maeve traverses the whole park, fighting off ninjas and Call of Duty: Modern Warfare NPCs for days to reach her daughter—who doesn't even remember her. Again, it's unclear why some characters are completely unaffected by the reveries, while others have fully abandoned their previous identities to forge a new path. But with Maeve's techno-holy spirit powers rewriting code left and right—remember how she unlocked Lawrence's memories?—it seems like they should have been able to work something out.

The fact that Maeve was eventually captured and tortured while trying to protect this stranger with her daughter's face is just salt in the wound.

How naïve do you have to be to blackmail a ruthless corporate militia that just genocided a potentially sentient new species? At least make one of those automatic messages that sends the dirt to the media in the event of your death before you threaten the big bad! Has Elsie never watched a spy movie before? Has Westworld usurped all other forms of literature to the point that she had never encountered this extremely avoidable scenario? And its a dick move to keep treating Bernard like a host, freezing his motor functions, after she seems to admit there's a spark of sentience in him.

By the end of this thing, she looks like the girl from The Ring and she makes her people murder each other. The nature of choice and free will is complicated when it comes to hosts who have been reprogrammed by humans, but come on. Isn't there enough of you left in there that you could ride your pale horse a little bit slower?

The whitehat's transformation from the right hand of justice to Dolores' murderous henchman was one of the most fascinating in the series—right up until Dolores gets in his head and rewrites his code in episode five, "Akane no Mai." He became an uncomplicated, ruthless killing machine in a heartbeat. His tragic end is confusing, though. Was being a "good" person an intrinsic part of his identity? If Dolores' tweaks violated that code, why did it take so long to reject the changes? If Dr. Ford's premise is that hosts are superior to humans because they can upgrade themselves, why not simply keep tweaking Teddy until he finds the right mix of chivalrous and murderous? His character's development felt like a weak ploy to leave Dolores alone to confront Bernard, which seems like a completely missed opportunity.

Roland is another uncomplex and thinly evil human being. His code is probably even simpler than the 10,000 line average the program in The Forge says comprises most humans. He gets to dress better and more villainously than other Livestock Management Technicians like Sylvester and Lutz, perhaps because he's way more sadistic than the rest. He secures Peter Abernathy to a chair with a giant nail gun, and for some reason turns on Maeve's pain receptors before beginning to dissect her. He'd be more interesting if he were a host programmed to make other hosts think humans are garbage.

While technically not a character, we can all agree the huge section of the season fleshing out Westworld's eastern counterpart was a colossal waste of time. The cinematography, sets, and costumes were stunning, to be sure. But if you want to see Western genre archetypes mirrored with Japanese characters, go watch an Akira Kurosawa movie. The two-episode arc didn't really add anything to the already jam-packed plot, except to justify the cool samurai scenes at the end of season one.

Sizemore's "heroic" sacrifice was the most bullshit scene in the whole finale, if not the whole of season two. If his goal was to slow down the Delos security forces, jumping out and getting shot by them is one of his worst moves. It's tough to swallow the idea that Mr. Playboy puppetmaster would about-face so quickly on his opinions of the hosts. He, more than anyone but Ford, can see they're simply regurgitating dialogue he's written at appropriate moments. Bellowing out a speech you wrote for a fictional character during a suicide by cop seems to underline the unlikelihood that it's something the guy who was drunkenly hitting on Charlotte Hale a season ago would do.