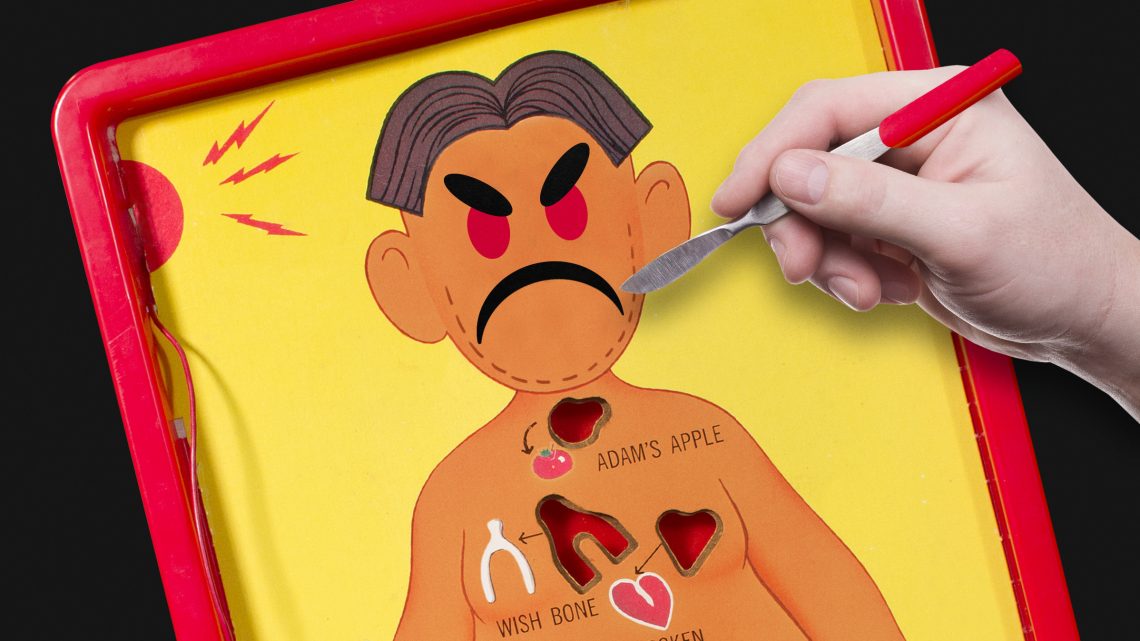 When Tom stumbled upon Lookism.net, he thought he'd found "the cheat code to life"—or at least an explanation as to why the girl he was fixated on didn't like him back. The 17-year-old, who hails from the Netherlands and would only share his first name, had already spent time on forums bashing deceptive pick-up artists and promiscuous women, but ultimately found a home in this lesser-known community populated by involuntarily celibate men obsessed with extreme measures of ostensible self-improvement. Soon after joining the strange subculture, Tom posted a picture of himself and asked a question common around those parts: "How over is it?"

The responses came hard and fast—and they were remarkably harsh given that Tom is 6 '4", blonde, and handsome. A handful of people suggested "roidceling," forum lingo for bulking up with steroids. One insisted on rhinoplasty and other surgery to make Tom's eyes more almond-shaped, so as to correct what the commenter referred to as "scleral show." Other suggestions included chin and jaw implants, palate expansion surgery, and forehead reduction. "Your genes are pretty fucked up I'll tell you that," a poster with an anime avatar told the teen point blank.

It's unclear who turned the lights on at Lookism, because the domain is connected to a PO Box in Panama, but the proprietor appears to be a crypto bro who uses the handle "poobear" and lists his age as 32. The user didn't respond to an interview request, but the community he leads bills itself as "the website where looks matter." That might be the understatement of the century: Denizens obsess over the idea of the "perfect face" in hopes of figuring out how they might reconstruct their own, however recklessly, so as to attract mates. A popular section of the site contains rate-me threads, where incels post selfies so anonymous commenters can make recommendations on how they can "looksmax"—or get more attractive. Tips range from seemingly sane advice on a new hairstyle to admonishments to get expensive and brutal surgeries, like the ones used to repair Le Fort skull fractures, in order to change their bone structures.

There's a ban on "Nazi discussion" as per the board's rules, and it's less overtly hateful than other, ideologically adjacent forums, such as the now-defunct one, PUAHate, that incubated incel mass murderer Elliot Rodger. (The Isla Vista killer is occasionally glorified on Lookism, but a random college football player from the 80s seemed to enjoy more reverence for his hyper-masculinity.) Plus, as is the case with much of the reactionary discourse taking place online, it can be hard to tell if die-hard users are just trolling.

But even if the recommendations doled out on the board test the bounds of credulity, Tom told me via DM he was "pretty serious" about realizing them. He called comments he received an "atomic blackpill"—a huge wake-up call that he would never get a girlfriend without taking drastic measures to alter his body. His experience is a testament to the power of fringe online communities to inculcate radical thinking in ways that don't just threaten others, but may be most harmful to the believers themselves.

"Of course, I'm 17 and still developing, so it wouldn't be smart to do it right now," Tom told me about getting facial surgery. "Finding out about big flaws in [my] looks like having a recessed chin, long philtrum, long face in general, big forehead, etc., I want to correct it. I want a better quality of life, and am disgusted by some of my features."

Lookism is more popular than a similar site, looksmax.net, but less so than some of the subreddits where incels more broadly congregate, like /r/braincels, which might have upwards of 2,000 active users at any given time. Still, it has a fairly solid fan base: Just after noon on a Thursday in June, 600 users had been active in the past 15 minutes. But why would so many people want to post on a board where others are eager to tell them they're ugly and beyond hope?

The phenomenon of dudes congregating online to stoke what sometimes seems an awful lot like body dysmorphic disorder is reminiscent of the pro-ana—that is, anorexia—communities that drew scrutiny a few years back. Peggilee Wupperman, a psychologist at the City University of New York who studies self-destructive behavior, told me in an interview that a decent percentage of people on the site probably already had at least some features of BDD before visiting Lookism for the first time. In her estimation, reading and posting messages on the site might increase their distress about their appearance—and the perceived urgency of making radical changes.

A second category of people, Wupperman suggested, may interact with others on the site mostly out of curiosity about what others think of their appearance, but either not take any recommended actions or pick-and-choose the most superficial ones. A third subset, she continued, likely enter the site with no body dysmorphia at all, but may have other insecurities that leave them vulnerable to recommendations from strangers. These vulnerabilities could include some combination of mental-health issues, such as obsessive-compulsive- or personality disorder, low self-worth, loneliness, and simple desperation about ever attracting a woman. When those people feel hopeless, they can be susceptible to pressures many of us might otherwise dismiss.

Regardless of what corner of the internet they congregate in, incels often talk about different ways of "coping" with the unfortunate genetic hand they feel they've been dealt. There are therapists who claim to be able to help incels get laid (and to coach them in a way that doesn't encourage misogyny), but many are discouraged from going that route. Instead, having their feelings validated by other lonely guys online may provide a small degree of apparent relief, and even more than that, fixating on an surgical solution that's prohibitively expensive but at least scientifically plausible could provide a form of escapism, however noxious.

To wit: I didn't see a single post from someone who had actually gone through with surgery during my month lurking the board. "Personally, I've seen a lot more talk about surgery than results," one user who goes by "Wario" told me. Another guy who's posted almost 13,000 times on Lookism since 2015 under the handle "ugliest" told me that "95% is bullshitting. 5% is getting" when it came to facial reconstruction. Some users described their postings on the site as an addiction, while others said they simply enjoyed being part of a nihilistic board because, ironic though it may sound, they saw it as a judgment-free zone. "There definitely aren't a lot—if any—other places where you can post your controversial opinion without it being deleted," ugliest added. "4chan comes to mind, but it's not as readable as this website. And Reddit will censor most controversial opinions."

Bharath is a 19-year-old American who also would only tell me his first name. He said he found the content on Lookism funny, and that he enjoyed learning about other people's problems. However, he seemed to be taking the philosophy of lookism fairly seriously for someone who claimed be there mainly for the trolling and camaraderie, describing plans to get surgery before college classes start up in the fall, and expressing specific interest in wrap-around jaw surgery, lip reduction and rhinoplasty. He suggested that this would cost him under $25,000, but that as soon as he graduated and got a job, he planned to start saving so as to get even more work done.

Tom, the 17-year-old from the Netherlands, also seemed to go through a sort of conversion after a relatively short period of involvement with Lookism. He said he just started off seeking answers as to why he wasn't popular and why his crush was unrequited, and that he figured a couple of guys would tell him to hit the gym. But instead—and to his distress—the commenters convinced him he was beyond hope. Now he's sticking around to learn more about looksmaxing, which actually seems to aspire to a halfway-medical knowledge of anatomy, as well as a dictionary's worth of obscure lingo. It's a worthy investment, he suggested, because taking the Lookism approach was the only path he saw to a meaningful life.

"I just can't see how things would suddenly change for me," he explained. "Thats why I'm planning on looksmaxing to at least become an acceptable person, not only for others but also for myself. I don't want to identify as an incel, but I am one. It doesn't matter how much I don't want it to be true."

Justin Lehmiller, a Kinsey Institute research fellow and author of the forthcoming book Tell Me What You Want, told me what most people might consider obvious: It's not good idea to reconstruct your entire face solely in hopes other people will find you more attractive. Besides being expensive and physically dangerous, such procedures also carry huge psychological risks. Undergoing them with sky-high expectations for the results only to be disappointed by the outcome can be devastating.

"Before jumping into cosmetic surgery, remember that personality consistently tops the list when it comes to the traits that heterosexual women are attracted to in a male partner," Lehmiller told me. "Humor, intelligence, honesty, kindness, communication skills—these are the kinds of things that women say are more important than looks and that no amount of surgery can change. So focus first and foremost on being the right person."

If you or someone you know is fixated on perceived flaws in appearance or might be struggling with body dysmorphic disorder (BDD), help is available. Click here to learn about support groups based in the US and abroad.

If you are feeling suicidal, visit the website of the National Suicide Prevention Lifeline or call toll free 1-800-273-TALK (8255) at any time. A listing of similar helplines in other countries can be found here.

Existing Home Sales Down Again: Yun Blames Inventory, a Symptom of the Problem