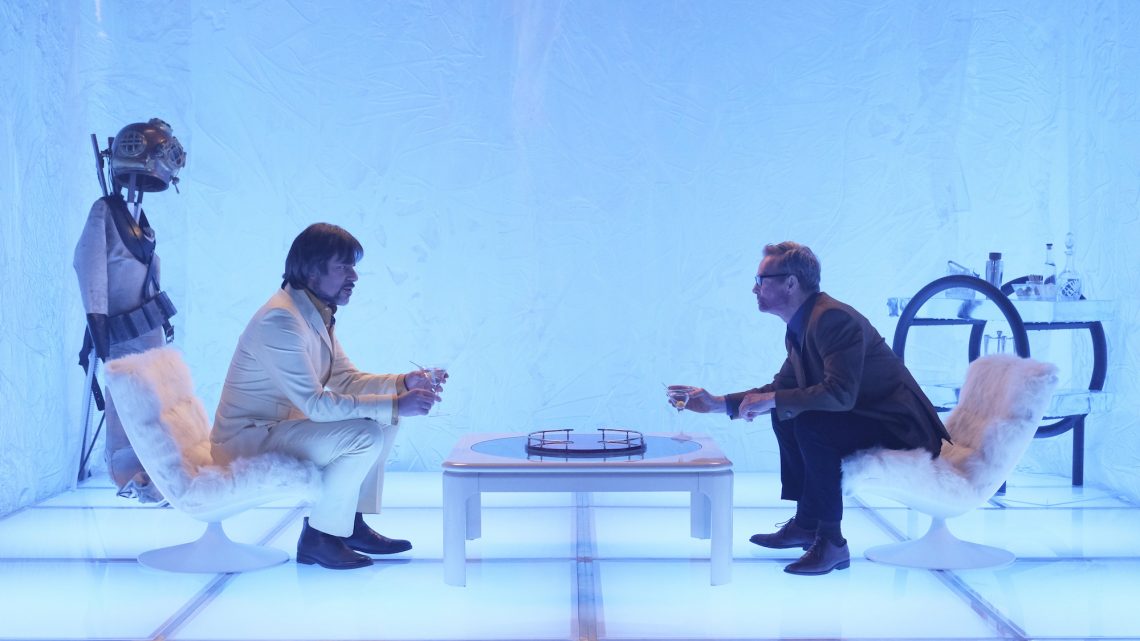 You Need to Watch ‘Legion,’ the Weirdest Show on TV

Over the last few weeks, leading up to Tuesday night's season two finale, I binged both seasons of Legion, the superhero drama on FX helmed by Noah Hawley. (He’s also the dude behind Fargo, which is an excellent show that everyone ought to watch.)

Legion is definitely the weirdest thing on TV right now. And after speeding through the first two seasons (FX recently renewed it for a third) I’m still not entirely sure I understand it. But that’s OK. It might even be the point.

Legion is loosely based on an obscure character from the X-Men universe. David Haller (Dan Stevens), we learn, is the orphaned son of Charles Xavier, known as Professor X, the leader of the X-Men. David grew up thinking he was schizophrenic. When we meet him in the pilot, he’s been institutionalized at a psychiatric hospital aptly named Clockworks (more on that later).

When a renegade band of mutants led by the beautiful Syd Barrett (Rachel Keller) spring David from the psych ward, they tell him he’s not crazy: He’s actually a powerful telepath. But what the gang of misfit mutants doesn’t yet know is that David is also plagued by a psychic parasite, the Shadow King, another telepath whose body is long dead but whose consciousness is using David as its earthly host.

That’s just the SparkNotes version of the plot of the first few episodes of the series. The narrative web Hawley spins is a tangled, complicated one. As the show prompts viewers to consider matters of time, space, alternate realities, and other dimensions, it also asks them to hang tight and come along for the story—which isn’t always linear and doesn’t always make sense.

Backing up for a minute, some of the show’s weirdness can be pegged to Hawley’s artistic influences. Some scenes in Legion seem like they could have sprung from the mind of David Lynch. Vulture compared the manifestation of the Shadow King in David’s mind to the way the spirit Bob appears to characters on Twin Peaks. When David visits the astral plane, it’s reminiscent of Lynch’s red room—the extradimensional spaces feel surreal and Kubrickian.

Hawley has actually called himself “Stanley Kubrick without the OCD," and the legendary director has obviously hugely influenced him. A character in Legion dwells inside a swanky, 1960s-styled ice cube, which looks a bit like the white bedroom from 2001: A Space Odyssey. In season two’s Sliding Doors-esque episode, which explores David’s possible alternate realities, there’s an explicit reference to A Clockwork Orange when an elderly, homeless version of David gets beat up by thugs modeled on Alex and his “Droogs.”

There are also tons of references to psychedelica and drugs, both self-medicated and doctor-prescribed. Early episodes show David and his buddy Lenny (Aubrey Plaza) as drug addicts, and their substance of choice, bright blue vapor, makes recurring appearances. The pills doled out at Clockworks Psychiatric Hospital (there you go, more Kubrick) look like ecstasy tabs and put David in a foggy dream state. It begs the question: Is the entire plot of Legion really happening to David? Or is he tripping and imagining it all? And does that explain why so many elements of the show are downright surreal yet left unexplained, like the appearance of a giant pink bathtub plug in a desert, making the experience of watching feel like eavesdropping on someone’s dream?

There are also obvious nods to psychedelic music—like Syd Barrett's name—and Hawley confirmed to Vulture that Pink Floyd is an important touchstone: “In the first conversation I had with the show’s composer, Jeff Russo, I said that it should sound like Dark Side of the Moon. Because that album is the soundscape to mental illness to some degree.”

Which brings me to the main, and most poignant, reason Legion is so (purposefully) weird: it tackles mental illness in a pretty revolutionary way for a mainstream TV show. The X-Men have always been a metaphor for stigmatized otherness: queerness, race, gender, belief. Legion inserts neurodiversity into the conversation. A core question David wrestles with throughout the series is whether he’s mentally ill, truly has powers, or both?

This is one reason why Hawley’s nonlinear, not always sensical, storytelling is important. It forces the viewer to question reality, and what constitutes sanity, right alongside Legion’s protagonist. That confusion emulates the suckiest parts of mental illness: never being sure if the way you’re feeling is normal, or the things you’re perceiving are true. Worrying that if you believe, it could turn out to be a delusion. Losing time to a cocktail of drugs and mania and having to piece reality together and possibly atone for behavior you don’t remember. Hawley’s narrative gaslighting mirrors the way mental illness clouds reality.

Season one of Legion addressed a broad range of mental illnesses, most notably during an episode that put all the main characters on the therapist’s couch, insinuating their abilities are different manifestations of insanity rather than genetic mutations. Season two is more overt, enlisting Jon Hamm to narrate educational interludes about madness and featuring a subplot that compares delusional thought to a contagious virus.

By the season two finale, an even more insidious theme emerged: the subversion of traditional good guy tropes, revealing David as an angry young man with the power to inflict death and destruction on an apocalyptic scale. The other characters on Legion back David into a corner: agree to psychiatric care or be "terminated" for the crimes he is prophesied to commit. This showdown echoed real-life struggles: stopping angry teens from committing school shootings; preventing violent extremists from recruiting the vulnerable; willing a suicidal loved one to accept help.

David sees himself as the good guy, the chosen one; Season two is riddled with religious iconography, casting David as a god or saint. But by the end of the season, David is forced to confront his deeply flawed humanity, examine the damage inflicted by a lifetime of mental illness, and question whether he's fundamentally good, after all.

I am tempted to go back and rewatch the first two seasons of Legion, because I'm sure there are things I straight-up missed. But once you understand why the show is befuddling, it's easier and more fun to get lost and enjoy it from an artistic, aesthetic perspective.

I feel like Legion has been flying under-the-radar for most people, which makes sense. It's not a glossy superhero tale that'd square neatly with the other Marvel Television franchises. Nor is Legion stylistically or thematically that similar to the bevy of blockbuster X-Men films. It's dark and twisted and yes, weird.

But Legion is unlike anything else on TV, and that makes it refreshing. I love its imagination, experimentation, willingness to broach complicated subjects, and impeccable production design. I also admire Hawley for thinking outside of the genre: Legion is the only superhero drama I know of that features a Bollywood musical sequence, an EDM dance number, and an animated battle duet. So spark up a joint (if that's your thing) and catch up on the trippiest show on TV this summer, while we await Legion season three.

Waluigi Fans Lost It Because He Got Left Out of the New ‘Super Smash Bros.’